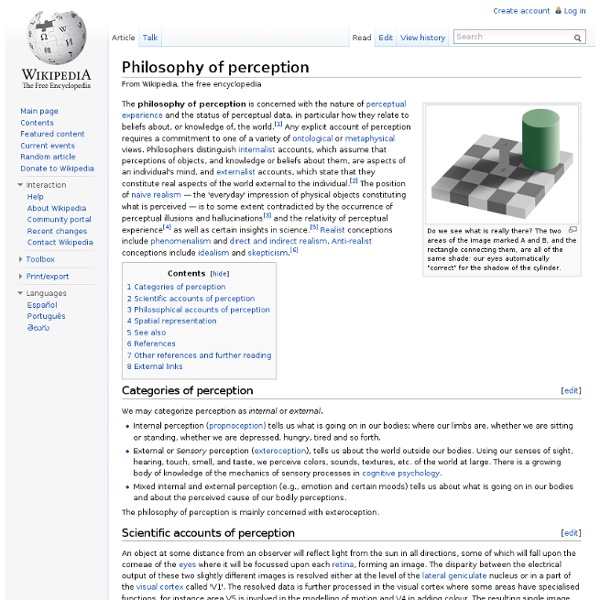 Do we see what is really there? The two areas of the image marked A and B, and the rectangle connecting them, are all of the same shade: our eyes automatically "correct" for the shadow of the cylinder. The philosophy of perception is concerned with the nature of perceptual experience and the status of perceptual data, in particular how they relate to beliefs about, or knowledge of, the world.[1] Any explicit account of perception requires a commitment to one of a variety of ontological or metaphysical views. Categories of perception[edit] We may categorize perception as internal or external. Internal perception (proprioception) tells us what is going on in our bodies; where our limbs are, whether we are sitting or standing, whether we are depressed, hungry, tired and so forth.External or Sensory perception (exteroception), tells us about the world outside our bodies. The philosophy of perception is mainly concerned with exteroception. Scientific accounts of perception[edit] See also[edit] Related:  study

See iTunes U on laptop judgments TOPIX Tokyo Stock Price Index (東証株価指数?), commonly known as TOPIX, along with the Nikkei 225, is an important stock market index for the Tokyo Stock Exchange (TSE) in Japan, tracking all domestic companies of the exchange's First Section. It is calculated and published by the TSE. As of 1 February 2011[update], there are 1,669 companies listed on the First Section of the TSE, and the market value for the index was ¥197.4 trillion.[1] The index transitioned from a system where a company's weighting is based on the total number of shares outstanding to a weighting based on the number of shares available for trading (called the free float). TSE currently calculates and distributes TOPIX every second and further plans to launch a new High-Speed Index dissemination service provided at the millisecond level starting from February 28, 2011. History of TOPIX[edit] Statistics (Close Price)[edit] TOPIX New Index Series[edit] TOPIX 100 companies[edit] See also[edit] Nikkei 225 References[edit]

change in technology even the way pschology effects people as a I'm not a believer in psychology, but some non it seems like sociology can help with things