Rising Seas - Interactive: If All The Ice Melted 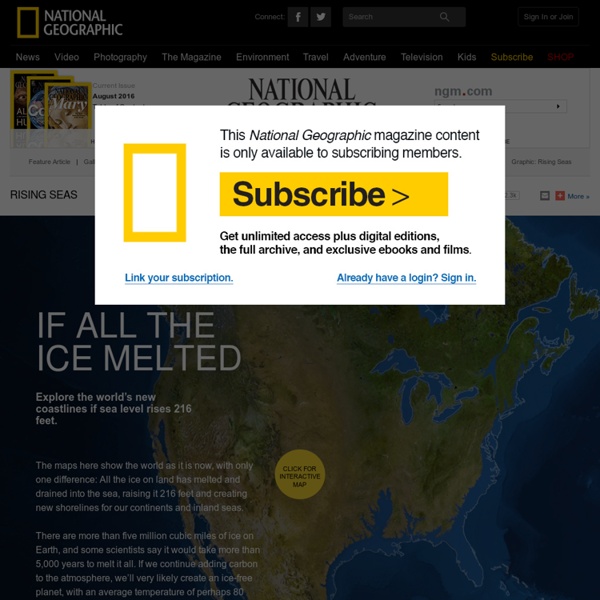 Explore the world’s new coastlines if sea level rises 216 feet. The maps here show the world as it is now, with only one difference: All the ice on land has melted and drained into the sea, raising it 216 feet and creating new shorelines for our continents and inland seas. There are more than five million cubic miles of ice on Earth, and some scientists say it would take more than 5,000 years to melt it all. If we continue adding carbon to the atmosphere, we’ll very likely create an ice-free planet, with an average temperature of perhaps 80 degrees Fahrenheit instead of the current 58.

Apps That Challenge Kids to Solve Environmental Issues By Tanner Higgin, Graphite Environmental education for most adults used to mean learning a little bit about recycling and planting some trees on Arbor Day. We didn’t delve into ecology as much as we skimmed the surface. But things have gotten more complex since then, and the topic of climate change has brought environmental education to the forefront. Allan Savory’s key concepts: an infographic cheat sheet Environment Let’s unite as Team Humanity to revive degraded land: A conversation with TED Books author Allan Savory and rancher Gail Steiger All over the world, land is turning into desert at an alarming rate. Biologist Allan Savory has dedicated a lifetime to figuring out what’s causing this “desertification.” Finally, after decades of work in the field, Savory discovered a radical solution—one that went against everything scientists had always thought. He used huge herds of livestock, managed […]

This 10-Mile Loop Of Parks Would Protect New York From Rising Water As sea levels rise along the New York City waterfront, “100-year” storm surges may eventually happen as often as every three years, with more chances of Sandy-like damage if the city doesn’t rebuild its borders. One redesign under consideration now: Big U, a 10-mile long shield of parks and community spaces that would help protect Manhattan neighborhoods from flooding. Designed by Bjarke Ingels Group (BIG) and a network of collaborators over the last 10 months, Big U is one of 10 finalists in the Rebuild by Design competition launched by the U.S. Department of Housing and Urban Development last year.

Scientists say Antarctic melting could double sea level rise. Here’s what that looks like. According to a new study, high levels of greenhouse gas emissions could cause oceans to rise by close to two meters in total (over six feet) by the end of the century, and more than 13 meters (42 feet) from Antarctica alone by 2500. (Nature, Rob DeConto, David Pollard) In a groundbreaking climate change study, scientists have found that by neglecting to include the melting of Antarctica, we have vastly underestimated the potential for sea level rise over the next 80 years — and beyond.

You Might Be a STEM Teacher If . . . You are busy, short on time, and under-resourced? But wait! That’s the case with most all teachers. Many Earth-Like Planets Have Climates Too Hot for Life Charles Q. Choi An alien planet climate analysis cuts nearly in half the estimated number of habitable planets in our galaxy, scientists reported on Wednesday. The findings arise from a new 3-D computer model that reveals the climates of other worlds may be warmer than researchers expected. PPP in combating climate change Saturday, January 7, 2012 Photo: Star ArchiveShameem Siddiqi Bangladesh is one of the most vulnerable countries to climate change. Interventions will be required over a long time for adaptation and mitigation. They will need to adopt different approaches to programming, while the ongoing development initiatives will need to be sensitive to climate change.

Amid Climate-Fueled Food Crisis, Filipino Forces Open Fire on Starving Farmers Police and army forces shot at about 6,000 starving farmers and Lumad Indigenous people demonstrating for drought relief in the Philippines on Friday, ultimately killing 10. Observers characterized the security forces' action as "a strafing." "The government's response to hunger is violence," said Zeph Repollo, Southeast Asia campaign coordinator for 350.org, in an email to Common Dreams. Three protesters were immediately killed, and by Monday the death toll had risen to 10 as more demonstrators succumbed to injuries. "We don’t have anything to eat or harvest. Our plants wilted. Ten Good Video Sources for Science Teachers and Students On Sunday evening I shared a list of ten good sources of social studies videos. To keep the video source series going I've created a list of sources for educational science videos. Here are ten good sources of science videos for students and teachers. On his website and YouTube channel Montana's 2011 Teacher of the Year Paul Anderson has uploaded more than 300 quality instructional videos like the ones about biology that are embedded below.

Glyphosate Found in Human Urine Across Europe People in 18 countries across Europe have been found to have traces of the weed killer glyphosate in their urine, show the results of tests commissioned by Friends of the Earth Europe and released today. Source: foeeurope.org The findings raise concerns about increasing levels of exposure to glyphosate-based weed killers, commonly used by farmers, public authorities and gardeners across Europe. The use of glyphosate is predicted to rise further if more genetically modified (GM) crops are grown in Europe [2]. Find Full Results Here Despite its widespread use, there is currently little monitoring of glyphosate in food, water or the wider environment. Megacities contend with sinking land 29 April 2014Last updated at 05:59 ET By Jonathan Amos Science correspondent, BBC News, Vienna Inundation of flood water in these cities is becoming a more significant problem Subsiding land is a bigger immediate problem for the world's coastal cities than sea level rise, say scientists. In some parts of the globe, the ground is going down 10 times faster than the water is rising, with the causes very often being driven by human activity. Decades of ground water extraction saw Tokyo descend two metres before the practice was stopped. Speaking at the European Geosciences Union General Assembly, researchers said other cities must follow suit.