Language interference: Thai and English. In this Issue Contributors Letters to the Editor Write to Us Spread the Word Back Issues Index Register. 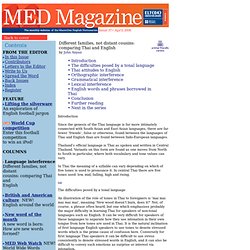 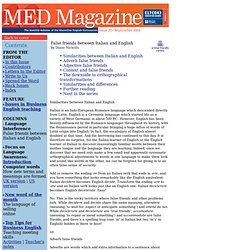 English is a Germanic language which started life as a variety of West Germanic in about 500 BC. However, English has been heavily influenced by the Romance languages throughout its history, with the Renaissance period in particular bringing a huge influx of words of Latin origin into English. English pronunciation: index of common mistakes by first language background. ----------------------------------Minimal Pairs - Practice exercises The teacher or student (A) reads out ONE word from each pair without telling whether he or she is reading from column one or column two. According to what is read out, Student (B) then says "column 1" or "column 2" or just ONE or TWO. A variation is for the teacher or Student (B) to read the same word aloud twice or else the two contrasting words. Student (A) says whether the words are 'the same' or 'different'. [Recommended for ALL language backgrounds = *] Non-native pronunciations of English. Overview[edit] The speech of non-native English speakers may exhibit pronunciation characteristics that result from such speakers imperfectly learning the pronunciation of English, either by transferring the phonological rules from their mother tongue into their English speech ("interference") or through implementing strategies similar to those used in primary language acquisition.[1] They may also create innovative pronunciations for English sounds not found in the speaker's first language.[1] The age at which speakers begin to immerse themselves into a language (such as English) is linked to the degree in which native speakers are able to detect a non-native accent; the exact nature of the link is disputed amongst scholars and may be affected by "neurological plasticity, cognitive development, motivation, psychosocial states, formal instruction, language learning aptitude", and the usage of their first (L1) and second (L2) languages.[2] Examples[edit] Arabic[edit] 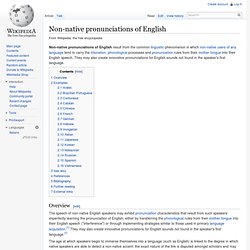 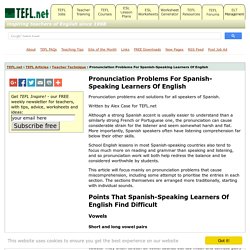 Although a strong Spanish accent is usually easier to understand than a similarly strong French or Portuguese one, the pronunciation can cause considerable strain for the listener and seem somewhat harsh and flat. More importantly, Spanish speakers often have listening comprehension far below their other skills. School English lessons in most Spanish-speaking countries also tend to focus much more on reading and grammar than speaking and listening, and so pronunciation work will both help redress the balance and be considered worthwhile by students.

This article will focus mainly on pronunciation problems that cause miscomprehension, including some attempt to prioritise the entries in each section. The sections themselves are arranged more traditionally, starting with individual sounds. Vowels. Teaching Eng Pron to Japanese learners. Kistler - Helping Japanese Students Overcome Common Pronunciation Problems Caused by Katakana English. The Internet TESL Journal Michael Kistler and Joseph Sandkampmd_kistler [at] hotmail.com & joesandkamp {at} gmail.comAsia University (Tokyo, Japan) 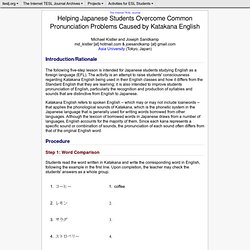 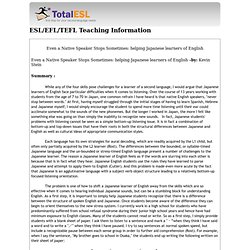 Over the course of 13 years working with students from the age of 7 to 70 in Japan, one common refrain I have heard is that native English speakers, "never stop between words. " At first, having myself struggled through the initial stages of having to learn Spanish, Hebrew and Japanese myself, I would simply encourage the student to spend more time listening until their ear could acclimate somewhat to the sounds of the new phonemes. But the longer I worked in Japan, the more I felt like something else was going on than simply the inability to recognize new sounds. In fact, Japanese students' problems with listening cannot be seen as a simple bottom-up listening issue. SST-96-Chapter15-2-p39. Ptlcpaper_27e. Raising Japanese Students' Consciousness of English Article Usage: A Practical View. 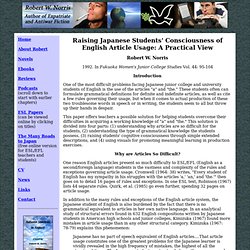 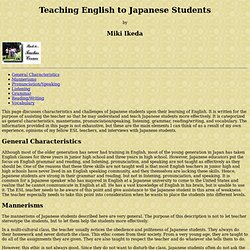 It is written for the purpose of assisting the teacher so that he may understand and teach Japanese students more effectively. It is categorized as general characteristics, mannerisms, pronunciation/speaking, listening, grammar, reading/writing, and vocabulary. The information provided in this page is not exhaustive, but these are the main elements I can think of as a result of my own experience, opinions of my fellow ESL teachers, and interviews with Japanese students. General Characteristics. The difficulties faced by chinese students learning english. Problems Faced By Chinese Learners. Problems Faced by Chinese Learners in L2 English Learning and Pedagogic Recommendations from an Inter-Cultural Communication Perspective by Manfred Wu Man Fat, Hong Kong 1 Introduction According to the Sapir-Whorf Hypothesis, the languages we learn as a child (i.e., mother tongues) strongly influence the ways we think and view the world. 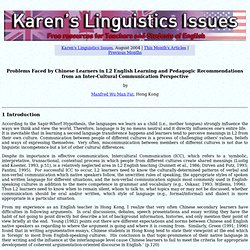 Therefore, language is by no means neutral and it directly influences one's entire life. Despite its importance in effective communication, Intercultural Communication (ICC), which refers to a 'symbolic, interpretative, transactional, contextual process in which people from different cultures create shared meanings (Lustig and Koester, 1993, p.51), is a relatively neglected area in L2 English teaching (Dunnett et al., 1986; Dirven and Putz, 1993; Fantini, 1995). 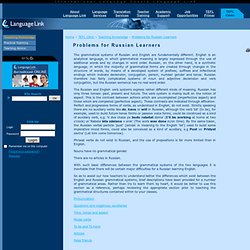 English is an analytical language, in which grammatical meaning is largely expressed through the use of additional words and by changes in word order. Russian, on the other hand, is a synthetic language, in which the majority of grammatical forms are created through changes in the structure of words, by means of a developed system of prefixes, suffixes and inflectional endings which indicate declension, conjugation, person, number gender and tense. Russian therefore has fairly complicated systems of noun and adjective declension and verb conjugation, but the Russian sentence has no real word order.