North Korea took $2 billion in cyberattacks to fund weapons program: U.N. report. Venice Canals go dry following weeks without rain. Venice has historically had a problem with too much water inundating its canals, but thanks to a combination of low tides and a lack of rain over the last few weeks, the sinking city’s waterways have turned into channels of mud. 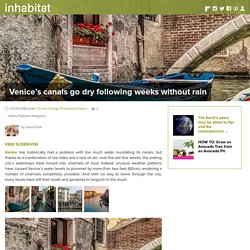 Indeed, unusual weather patterns have caused Venice’s water levels to plummet by more than two feet (60cm), rendering a number of channels completely unusable. And with no way to move through the city, many locals have left their boats and gondolas to languish in the muck. The Independent reports that dip in water is the direct result of low tides caused by the super blue blood moon paired with unseasonably dry weather. For Coastal Communities, the 1.5C Climate Goal Is a Matter of Life or Death. In Brief A new study shows that limiting global average temperatures to below 2° C might not be enough to keep coastal areas safe from rising sea levels. 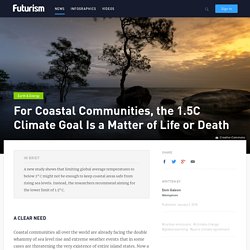 Instead, the researchers recommend aiming for the lower limit of 1.5° C. A Clear Need Coastal communities all over the world are already facing the double whammy of sea level rise and extreme weather events that in some cases are threatening the very existence of entire island states. Now a new study adds weight to the argument that for the sake of these communities we need to ramp up efforts and achieve what many think almost impossible, keeping global warming below 1.5° C (2.7° F). A team from Tufts University, Rutgers University, and the Potsdam Institute for Climate Impact Research in Germany found that if countries managed to stabilize global temperatures within this threshold by 2150, the impact of sea level rise would be significantly reduced. The Paris Agreement controversy Reaching the Goal. Reef rescuers race to keep pace with climate change. Ten years ago, when scientists in South Florida began a massive rescue effort to rebuild the nation’s only inshore reef, replanting nursery-grown staghorn coral with a gardening technique perfected in the Pacific seemed like an easy solution. Study Confirms World's Coastal Cities Unsavable If We Don't Slash Carbon Pollution. A new study confirms what leading climate scientists have warned about for many years now: Only very aggressive climate action can save the world’s coastal cities from inundation by century’s end. 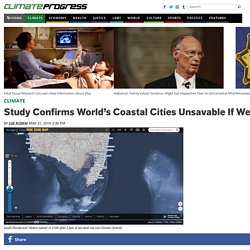 We still could limit sea level rise to two feet this century if we keep total warming below 2°C, according to analysis using these new findings. Otherwise, we should be anticipating five to six feet of sea level rise by 2100 — which would generate hundreds of millions of refugees. On the trail of some of the world's rarest monkeys. Tim Plowden/REX/Shutterstock A close shave with armed poachers was a wake-up call. 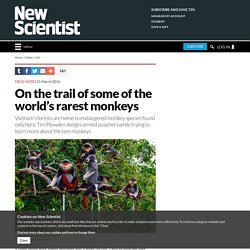 I had to keep my wits about me as I followed the trail of some of the world’s most endangered primates. My local fixer had wandered off briefly to record the dawn chorus of birds in Vietnam’s Cuc Phuong national park.

Rising Seas - Interactive: If All The Ice Melted. 4 Enormous Projects That Could Save Coastal Cities In Our Flooded Future. Huge Waves Spotted In The Arctic Ocean. The Arctic Ice-cap has a new enemy: huge waves. 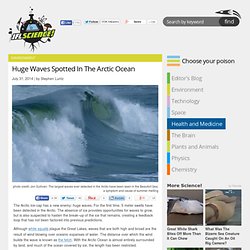 For the first time, 5 meter swells have been detected in the Arctic. Megacities contend with sinking land. 29 April 2014Last updated at 05:59 ET By Jonathan Amos Science correspondent, BBC News, Vienna Inundation of flood water in these cities is becoming a more significant problem Subsiding land is a bigger immediate problem for the world's coastal cities than sea level rise, say scientists. 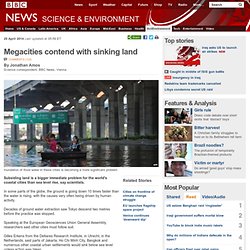 PPP in combating climate change. Saturday, January 7, 2012 Photo: Star ArchiveShameem Siddiqi Bangladesh is one of the most vulnerable countries to climate change. 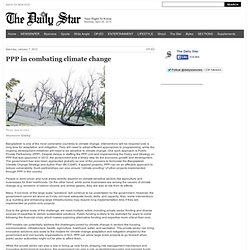 Interventions will be required over a long time for adaptation and mitigation. They will need to adopt different approaches to programming, while the ongoing development initiatives will need to be sensitive to climate change. One such approach is Public Private Partnership (PPP). People in semi-urban and rural areas directly depend on climate-sensitive sectors like agriculture and businesses for their livelihoods. Many, if not most, of the large scale “solutions” will continue to be undertaken by the government. Due to the global scale of the challenge, we need multiple actors including private sector funding and diverse sources of expertise to deliver sustainable solutions. PPP models can potentially address the challenges posed by climate change in sectors like housing, communication, infrastructure, health, agriculture, livelihood, water, and sanitation.

British Isles in 2100 by JaySimons on deviantART. This 10-Mile Loop Of Parks Would Protect New York From Rising Water. As sea levels rise along the New York City waterfront, “100-year” storm surges may eventually happen as often as every three years, with more chances of Sandy-like damage if the city doesn’t rebuild its borders. One redesign under consideration now: Big U, a 10-mile long shield of parks and community spaces that would help protect Manhattan neighborhoods from flooding. Designed by Bjarke Ingels Group (BIG) and a network of collaborators over the last 10 months, Big U is one of 10 finalists in the Rebuild by Design competition launched by the U.S. Department of Housing and Urban Development last year. The design is focused as much on the everyday needs of local neighborhoods as on flood protection--an approach that's very different than how infrastructure has been built in the past.