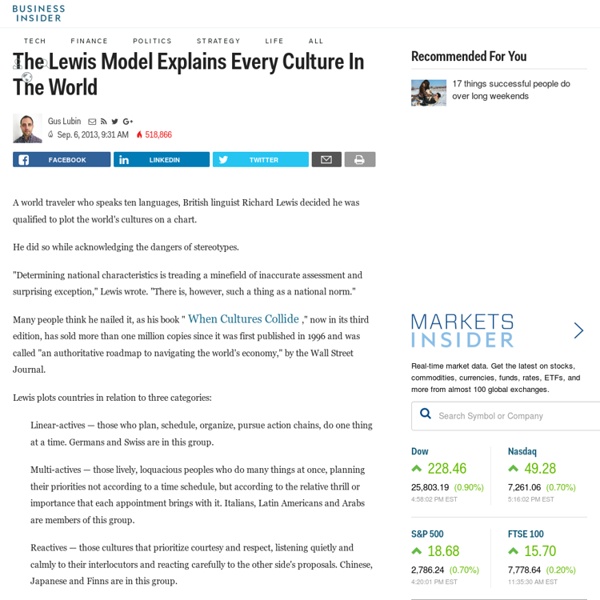 A world traveler who speaks ten languages, British linguist Richard Lewis decided he was qualified to plot the world's cultures on a chart. He did so while acknowledging the dangers of stereotypes. "Determining national characteristics is treading a minefield of inaccurate assessment and surprising exception," Lewis wrote. "There is, however, such a thing as a national norm." Many people think he nailed it, as his book "When Cultures Collide," now in its third edition, has sold more than one million copies since it was first published in 1996 and was called "an authoritative roadmap to navigating the world's economy," by the Wall Street Journal. Lewis plots countries in relation to three categories: Linear-actives — those who plan, schedule, organize, pursue action chains, do one thing at a time. Reactives — those cultures that prioritize courtesy and respect, listening quietly and calmly to their interlocutors and reacting carefully to the other side's proposals. www.crossculture.com

How to win wars by influencing people's behaviour When terrorism is staged for YouTube and all sides are media-savvy, the military is turning to the behavioral sciences for help. Source: Guardian In 1955 Robert Oppenheimer, the physicist who led the project that developed the first atomic bomb, addressed the American Psychological Society. He warned that both physics and psychology could endanger humanity but that psychology “opens up the most terrifying prospects of controlling what people do and how they think”. Despite Oppenheimer’s warning, the idea that you could change human behaviour to win a war, rather than winning a war to change human behaviour, languished as an also-ran in the cold war arms race.

proverbs TRADITIONAL PROVERBS: A barking dog never bites. A bird in the hand is worth two in the bush A fool and his money are soon parted. A friend in need is a friend indeed. A new broom sweeps clean. A nod's as good as a wink to a blind man. 8 Vegetables That You Can Regrow Again And Again. Scallions You can regrow scallions by leaving an inch attached to the roots and place them in a small glass with a little water in a well-lit room. wearenotfoodies.com Garlic

This Chart Explains Every Culture In The World Cultures are complicated, and anyone attempting to explain or group them will struggle to avoid giving offense. Political scientists Ronald Inglehart of the University of Michigan and Christian Welzel of Luephana University in Germany put forth their best effort by analyzing data and plotting countries on a “culture map.” Their system stems from the World Values Survey (WVS), the largest”non-commercial, cross-national, time series investigation of human beliefs and values ever executed,” which dates back to 1981 and includes nearly 400,000 respondents from 100 countries. The latest chart, published several years ago, includes data from surveys conducted from 1995 to 1999, 2000 to 2004, and 2005 to 2009. Check it out: Wikimedia Commons

7 cultural concepts we don't have in the U.S. From the end of October through the New Year and onto Valentine's Day, it's easy to forget that the holidays we celebrate are simply cultural constructs that we can choose to engage in — or not. The concepts and ideas we celebrate — like our spiritual beliefs and daily habits — are a choice, though sometimes it feels like we "have" to celebrate them, even if we don't feel like it. Culture is ours to do with as we choose, and that means that we can add, subtract, or edit celebrations or holidays as we see fit — because you and me and everyone reading this makes up our culture, and it is defined by us, for us, after all. If you want to add a new and different perspective to your life, there are plenty of other ways to recognize joy and beauty outside American traditions. Friluftsliv A hiker sits atop Trolltunga, or 'troll's tongue,' a famous rock formation in southwestern Norway.

Anti-surveillance mask enables you to pass as someone else If you are not comfortable with the surveillance cameras, an identity replacement technology that is basically a Surveillance identity prosthetic provides you a new face. If you find all people around you having the same face like you saw of the agents in Matrix 3, then Leo Selvaggio is the one to thank. He has designed a rubber mask with the aim to foil surveillance cameras. The mask features his own visage, and if he gets his way, then many people would be supporting this Prosthetic in Public.

Worlds Most Isolated Tribe – Enter Their Mysterious Island & They’ll Kill You! Introducing the Sentinelese people. They’ve been kicking around this beautiful island for a whopping 60,000 years. They inhabit a tiny island in The Indian Ocean which is estimated to be approximately the size of Manhattan. From the sky it appears to be an idyllic island with amazing beaches and a dense forest, but tourists or fishermen don’t dare to set foot on this island, due to its inhabitants’ fearsome reputation. When outsiders approach their island, they swarm the shoreline and rain down arrows. The Sentinelese are highly mysterious. 7 Survival Tips That Could Save Your Life. #2 Is Awesome! Have you ever wondered how to filter water, keep away the mosquitos or how to make a solar microwave? These tips might save your life one day. 1. Need some light in a pinch and a candle alone won’t cut it? Grab a soda can and cut open the sides, fold them out and place the candle in. This will reflect your light and give you some decent protection from the elements.

22 Astonishing Places That Are Hard to Believe Really Exist Our world is so full of wonders that new and amazing places are discovered every day, be that by professional photographers or amateurs. Different geographical locations, climatic conditions and even seasons offer the widest variety of natural wonders: pink lakes, stunning lavender or tulip fields, breath-taking canyons and mountains, and other places you can hardly believe actually exist! Some of the pictures in this collection will be of all natural sights you can find while traveling around the world, while the others have experienced human interference – but even in these cases, the result of such collaboration is spectacular. The Japanese learned how to tame thousands of orchids and form a romantic tunnel out of them; another one was formed all the way in Ukraine by a passing train; and what eventually ends up as hot tea in our mugs, first grows in stunning tree fields in Asia.

What value is most important to people in each country? The data above has been collected on a continuous basis by OECD Better Life Index since 2011. To date there are over 60,000 responses from over 180 countries. Interestingly, most developed nations, including USA, Canada, Western and Central European as well as Nordic countries tend to value life satisfaction and health most, countries that on the happy planet index did not rate quite as high as those in Central and South America. Why do you think is this? South America, on the other hand is the continent where education is by far the top priority in life.