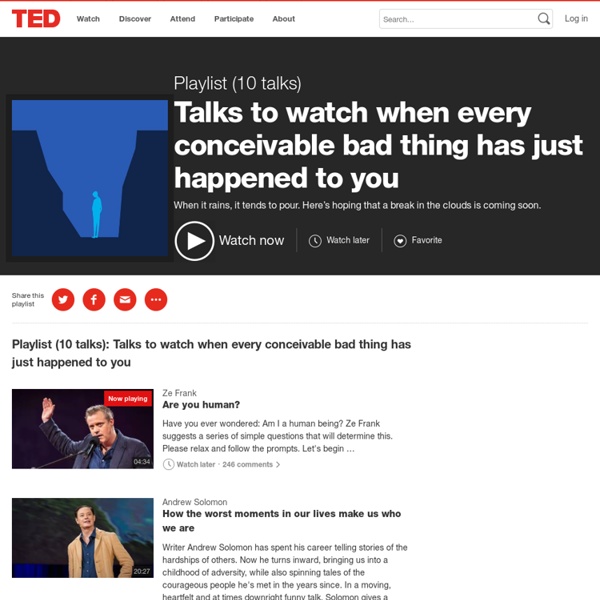 Talks that just might save your relationship | Playlist Now playing Infidelity is the ultimate betrayal. But does it have to be? Relationship therapist Esther Perel examines why people cheat, and unpacks why affairs are so traumatic: because they threaten our emotional security. In infidelity, she sees something unexpected — an expression of longing and loss. A must-watch for anyone who has ever cheated or been cheated on, or who simply wants a new framework for understanding relationships. "Don't wait for perfect." Brandon Stanton HONY Brandon Stanton has talked with 10,000 strangers and shared their stories with millions of people across the Internet. The 29-year-old photographer and creator of Humans of New York didn't hesitate to follow an idea and turn it into something meaningful. Stanton has photographed New Yorkers and visitors of the city since November 2010, developing one of the most dedicated online communities. Humans of New York (HONY) has nearly 1.5 million fans on Facebook, more than 33,000 followers on Twitter and regularly receives several thousand notes for each Tumblr post. The culmination of Stanton’s efforts is a book set for release on Oct. 15. The book, simply titled Humans of New York, is a compilation of Stanton’s best work, and also includes 75 never-before-seen portraits. Mashable followed Stanton on his rounds to learn a little bit about the process behind the hugely popular blog and the man — a former bond trader in Chicago — behind the camera. You can sense when somebody wants something.

10 Clever Tricks to Trigger Positive Emotions People who see the glass half-full are certainly happier than the pessimists of the world, and learning to think positively is worthwhile. However, changing the way you think can be surprisingly tricky, especially when the going gets tough. What if there were a way—a shortcut or hack—that positively affected how you feel when you just can’t seem to shake the blues? A few years ago, I came across a simple idea that has been validated in hundreds of experiments and has given rise to quick and effective exercises that can help you feel happier, avoid anxiety, increase your willpower, deepen relationships and boost confidence. The idea dates back to the turn of the 20th century and to the work of Victorian philosopher William James. According to James’s theory, forcing your face into a smile should make you feel happy, and frowning should make you feel sad. In the late 1960s, psychologist James Laird from the University of Rochester stumbled across James’s theory and decided to test it. 1.

No Regrets: 15 Ways To Make Sure You Die Happy What does it mean to die happy? It means to have lived a life with few regrets, filled joyful experiences and memories, amazing people, and to have lived with purpose. The question is: How do we do that? Well, I’m glad you asked. It’s not easy; it’s complicated. Here’s a guideline consisting of 15 tips that can help you live and die with a smile on your face: 1. Too much of any good thing ends up being a bad thing. You will enjoy each slice a little less than the last. 2. When I say as much as possible, I don’t mean that literally. Usually, we say no, not because we have prior commitments, but because we are either too afraid or too lazy to say yes. 3. As a human being, you can express yourself either physically or vocally, without having to use other external media. 4. Not only is laughing healthy for you, it also feels amazing. 5. There is so much to see in the world that by staying in one place, you truly are doing yourself an injustice. 6. 7. Your priorities are up to you. 8. 9. 10.

25+ apps that the TED staff swears make their everyday lives easier At our small, fast-moving nonprofit company, everyone does a couple of jobs — and productivity apps help us manage roles that shift between coding, writing/designing and running a full-scale conference twice a year. We asked the TED staff what apps they can’t live without. And beyond the classics—Instagram, Google Maps, Spotify, Uber, Seamless—we found some great apps that might help you too. For random life stuff… Dark SkyA weather app with startling accuracy, its interface tells you things like: “Light rain starting in 22 minutes.” *SunriseLike your Google Calendar with key improvements, several staffers swear by this app. *KeyMeCommunications manager Samantha Kelly was excited to download this app, as she recently got locked out of her apartment. *Think DirtyThis app tells you exactly what’s in the personal care product you’re about to buy. Yoga StudioYoga Studio reminds us of the “Surprise Me” feature on the TED app. *Camera360This app has more than 200 photo filters and 10 modes.

Who are some successful people who failed at their first try? How to Make Difficult Conversations Easy: 7 Steps From a Clinical Psychologist Someone is screaming in your face at the top of their lungs. Or ranting angrily and you can’t get a word in edgewise. Or maybe they’re sobbing so hard you can barely understand what they’re saying. We’ve all been there. These situations don’t happen a lot (thank god) but we all feel helpless when they do. Problem is, these moments are often critical because they’re usually with people we care about. What’s the best way to handle these difficult conversations? I called someone who knows: Dr. Dinosaur Brains: Dealing with All Those Impossible People at Work Am I The Only Sane One Working Here? Emotional Vampires: Dealing With People Who Drain You Dry Here’s what you’ll learn in this post: The magic phrase that gets people to stop yelling.How to stop making the most common mistake in these kind of discussions.How to switch people from being emotional to being rational.The mindset that makes dealing with hysterical people easy.And a lot more. Okay, time to wage war with the crazy. You’re calm.

10 Qualities Every Alpha Male Should Look For In A Girlfriend Alpha men and women are those who shape the world. They are our leaders, our trendsetters, our troublemakers and our innovators. Without them, the human race could not progress. Being an alpha male is great in many ways and depressing in countless others. Finding an ideal girlfriend is never easy… but for alpha males, it’s even more difficult. 1. There isn’t much alpha males values over loyalty — they are pack leaders and expect those they lead to commit and stay loyal to them. 2. Alpha males aren’t brutes. Alpha males often fall into the habit of finding women who value superficial things over intellect. 3. Alpha males are driven by passion, by their wants, needs, goals and dreams. This is often why they have such a difficult time finding women with whom they wish to share their lives — few can keep up. 4. Living life as an alpha male isn’t easy — in fact, it’s much more difficult. 5. Control is the magical ingredient that turns dreams into reality. 6. 7. 8. 9. 10. Why?

The funniest TED Talks | Playlist Now playing The New Yorker receives around 1,000 cartoons each week; it only publishes about 17 of them. In this hilarious, fast-paced, and insightful talk, the magazine's longstanding cartoon editor and self-proclaimed "humor analyst" Bob Mankoff dissects the comedy within just some of the "idea drawings" featured in the magazine, explaining what works, what doesn't, and why. Famous Failures 30 Questions to Ask Yourself Before You Die. {Via studioflowerpower on etsy} “Rather than money, than fame, than love…give me truth.” ~ Thoreau I woke up this morning and my life clock marked 30. My first sleep-deprived idea was to pack a small suitcase, get on the first train, move to another country, change my name, change my hair color (or get plastic surgery if needed), and start from scratch. When I don’t know how to deal with life, I hide sometimes. By now, I’m good at both: fighting and disappearing. A true warrior doesn’t feel forced to do either, but moves through and with and for life, like water. So after I washed my face and considered the costs of running and those of fighting, I decided to do neither and have some juice instead. {Alkaline Espresso / Click for recipe.} We are a constant process, an event, we’re change. As such, our smaller houses, our temporary homes can only be made of cards. Loving the questions means to love yourself. So here is an exercise we can do together: a tweak to your usual bucket list. You.

How to turn small talk into smart conversation Imagine almost any situation where two or more people are gathered—a wedding reception, a job interview, two off-duty cops hanging out in a Jacuzzi. What do these situations have in common? Almost all of them involve people trying to talk with each other. But in these very moments where a conversation would enhance an encounter, we often fall short. We can’t think of a thing to say. Or worse, we do a passable job at talking. We stagger through our romantic, professional and social worlds with the goal merely of not crashing, never considering that we might soar. We at What to Talk About headquarters set out to change this. Ask for stories, not answers One way to get beyond small talk is to ask open-ended questions. Instead of . . . Try . . . Break the mirror When small talk stalls out, it’s often due to a phenomenon we call “mirroring.” Mirrored example: James: It’s a beautiful day! See? Non-mirrored example: James: It’s a beautiful day! See? Leapfrog over the expected response