Control everything with your voice 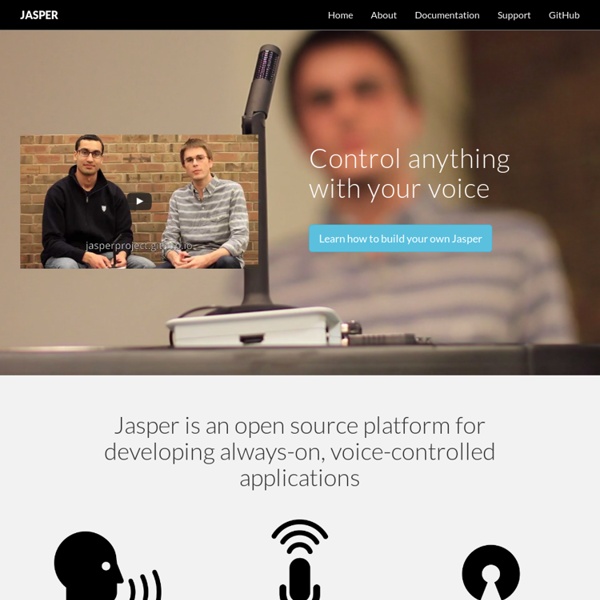 Best Voice Recognition Software for Raspberry Pi | DIY Hacking Best Voice Recognition Software for Raspberry Pi This tutorial is about the best voice recognition software for Raspberry Pi and how to use it. I was able to install and test three different voice recognition systems for Raspberry Pi. Two of these softwares were dependent on the internet and were online , however the third one was offline.The three softwares which were tested were : Out of these three, I rate the Voice Control software created by Steven Hickson to be the most precise and potent. The Jasper system, even though it works offline , it compromises on accuracy and speed. The softwares presented by Oscar and Steven use google voice APIs, they are very accurate and precise. Bill of Materials Hardware: Raspberry Pi model B with memory card preloaded with an OS.WiFi dongle (Optional) : Edimax EW 7811UN / LAN network cable.A USB webcam with microphone / USB microphone. You cannot use normal microphones with audio jacks because the raspberry pi does not have a sound card.

Open Bidouille Camp Raspberry Pi · alexa/alexa-avs-sample-app Wiki On this page Overview This guide provides step-by-step instructions for setting up AVS on a Raspberry Pi. It demonstrates how to access and test AVS using our Java sample app (running on a Raspberry Pi), a Node.js server, and a third-party wake word engine. You will use the Node.js server to obtain a Login with Amazon (LWA) authorization code by visiting a website using your Raspberry Pi's web browser. For instructions on how to set it up on Mac, Linux or Windows, please see our wiki. Required hardware Before you get started, let's review what you'll need. Raspberry Pi 3 (Recommended) or Pi 2 Model B (Supported) - Buy at Amazon - Pi 3 or Pi 2.Micro-USB power cable for Raspberry Pi.Micro SD Card (Minimum 8 GB) - You need an operating system to get started. For extra credit, we'll show you how to remote(SSH) into your device, eliminating the need for a monitor, keyboard and mouse - and how to tail logs for troubleshooting. Let's get started Step 1: Setting up your Pi Step 4: Clone the sample app