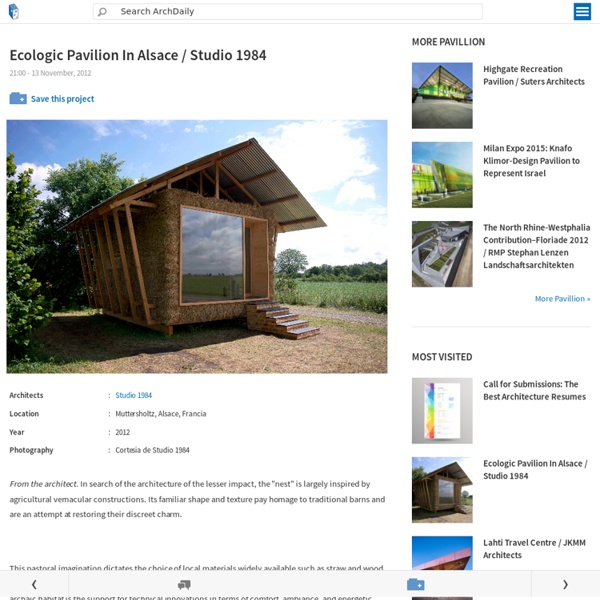 Architects Location Muttersholtz, Alsace, Francia Year 2012 Photography Cortesia de Studio 1984 From the architect. In search of the architecture of the lesser impact, the "nest" is largely inspired by agricultural vernacular constructions. Its familiar shape and texture pay homage to traditional barns and are an attempt at restoring their discreet charm. This pastoral imagination dictates the choice of local materials widely available such as straw and wood, the environmental impact of which are virtually nil. The reference to rural heritage far from generating an archaic habitat is the support for technical innovations in terms of comfort, ambiance, and energetic efficiency. The landscape integration’s effort logically leads to reinterpret several vernacular proven techniques. The "nest" is also a reflection on the transiency of constructions. Ambitions carried by the Archi <20 competition resonate with the most significant contemporary issues in terms of building.

John Pawson · Hotel Puerta América, Reception Desk and Meeting Rooms Courtesy of Hotel Puerta América With 950 m2, John Pawson has achieved an impressive space using a limited range of materials, wood being the principal material for the reception desks. As you enter the hotel, there is foyer. Hidden behind a wooden panel are the reception desk and the lifts. Loft Apartment / Ruetemple Architects: Ruetemple Location: Moscow, Russia Architect In Charge: Alexander Kudimov, Daria Butahina, Natalia Gubareva Area: 150 sqm Year: 2014 Photographs: Courtesy of Ruetemple From the architect. Top-floor apartment with an attic. Our task was to turn an uninhabitable attic into a comfortable and bright loft.

Dear Architects - Project - Red House The house program is summarized in three atmospheres which get arranged in three different stories that solve the project settlement on a site with a slope of twenty percent, this same topography foster the lyric of paths and the sequence between spaces: In direct contact with the lower garden the areas for the family interaction get established, at street level, with a cantilever of 4.5 m above the garden, all public areas are located, and the higher level is reserved for the areas of rest and privacy. Every level owns its specific terrace, with the characteristics that responds to the nature of the program which expands the room with the higher hierarchy. The plot, being a block corner open to the west, slopes south-north, same direction the volume develops, this allows to afford the views to the mountains, city, neighboring park and an impressive sunset. and projecting over the onsite made concrete and colored glass terrazzo.

Pisek City Forest Administration / e-MRAK Architects: e-MRAK Location: Flekačky 2623, Pisek, Czech Republic Architect In Charge: Martin Rajniš, Martin Kloda, David Kubík Area: 598.0 sqm Year: 2010 Photographs: Radka Ciglerova From the architect. The administration of the forest of the town of Pisek held a competition for a new operational building on a beautiful site at the edge of the forest; sloping to the south, it has a splendid view. Our foresters’ lodge is a box sliced in half by the hallway and its charm lies in the way that all of the outer layers of the building are wrapped around it: the linear winter gardens and the slanting shade-awnings.

Dutch studio Fiction Factory develops "groundbreaking" cardboard house concept Amsterdam collective Fiction Factory has developed a modular building system of cardboard components, which can be assembled in just one day to form houses or offices (+ slideshow). Named Wikkelhouse, which translates from Dutch as Wrap House, the completed prototype comprises a series of interlocking cardboard segments that each weigh 500 kilograms. Each of these tubular components is 1.2 metres deep, and can be connected and disconnected to extend or reduce the length of the building. They also make it easily transportable. Each section is made from 24 layers of cardboard.

Tree House / Robert Potokar and Janez Brežnik The Tree House, designed by Robert Potokar of Robert Potokar Architecture Office and co-designer Janez Brežnik, is a wooden play structure that is elevated without requiring nearby trees to support its weight. The concept, originally designed in February 2008 as since been realized three times. More on this project after the break. The freestanding, self-supporting house-by-a-tree is a playhouse designed with contemporary design principles, deviating from precedents that model real houses or garden sheds. Instead, the design was guided by the goal of creating interesting and different spatial experiences for children that inspire new forms of polay. An Old School Building Was Converted Into A New Apartment For A Young Family Photography © Standard Studio CASA architecten transformed an old 1910 school house in Amsterdam, into ten large apartments. One of those apartments in the renovated building was designed by Standard Studio for a family of four. Definitely not looking like a school anymore, the main area is open with the living, dining and kitchen area, all sharing the same space. The kitchen has a wall of peg board shelving, allowing the family to change the design whenever they desire. The kitchen/dining and living area are separated by the tall doors to the balcony.

Workshop in the City / Romero Silva Arquitectos Architect Location Las Condes, Santiago Metropolitan Region, Chile Architect in charge Diego Romero Area 11.5 m2 Project Year 2015 Photography Manufacturers Arauco Collaborators Constanza Chávez , Rafaela Olivares , Camila Méndez Construction José Arévalo In Charge of Building Alex Popp Interior Area 11,5 Exterior Area 2,5 From the architect. L’observatoire / CLP Architects Architects: CLP Architects Location: Alsace, France Project Architects: Daniel Concha, Fanny Landeau, José Prieto Project Year: 2012 Project Area: 20 sqmPhotographs: Jeremías González This project, realized for the Archi<20 competition, consisted on proposing a pavilion of 20 m2 floor space to be constructed in a protected natural area in Muttersholtz, Alsace. With a limited budget of 7000 Euro, the commission allowed us to seek for a precise and careful architecture. In this sense, our first intention was to create a building that could offer an experience of varied possibilities, using the least materials and formal recourses. This intention is translated into a structural system that performs various tasks: the possibility of light, shadow, ventilation and also to provide temporal storage space. Our second intention was to conceive an architecture that could enhance and diversify the relationship between the visitor of the pavilion and the surrounding environment.

Casey Brown Architecture - Project - JODIE’S HOUSE Jodie’s House on Sydney Harbour is situated on a dramatic steeply sloping site with north-easterly views over the beach and the water beyond. The topography resulted in the building being articulated as a series of pavilions. Intricately linked they cascade from the top of the site towards the shore. Connections between these levels are both complex and subtle, giving both a sense of journey and discovery as you move throughout the house. Samuel Gonçalves unveils housing model based on sewage pipes Venice Architecture Biennale 2016: Portuguese architect Samuel Gonçalves has installed three hollow concrete forms at the Venice Biennale to promote his modular housing system based on drainage pipes (+ movie). Gonçalves and his studio at the Science and Technology Park of University of Porto designed the Gomos System to offer a solution to the housing crisis in Portugal. The concrete modules match the shapes and dimensions of standard concrete sewer pipes, meaning they can be produced by simply modifying existing production lines. Gonçalves has installed three concrete modules on the waterfront at the Arsenale – one of the two main venues at the Venice Biennale. He believes they provide an efficient model for prefabricated housing. "It's not about inventing, but about reinterpreting – we take a preexistent constructive system often used in water drainage infrastructures and we make it a liveable constructive system," said the architect.

Plasma Studio - Project - Schäfer Roofscape The building is located in the historical center of San Candido, a small touristic village in the Dolomites. In the first three storeys (including one underground floor) it houses a department store while the upper three storeys have been transformed from a partly underused attic space into four large, independent apartments for the owner and his 3 daughters. One façade faces a public plaza protected by local planning regulations could only be raised to the level of the neighboring roofs.