Your source of daily updated funny pictures and gifs. 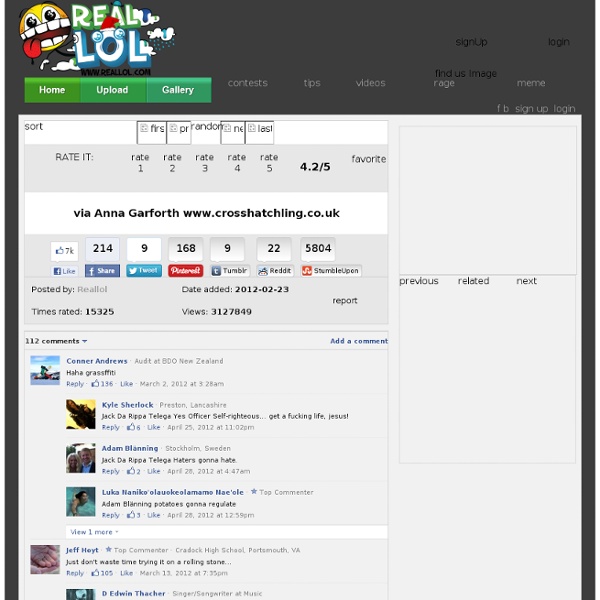 Fun Classroom Activities and Experiments to Interest Children / Kids in Growing Plants Growing a cutting can be fun too. I recommend Fuchsia's or Geraniums as they are easy to grow. Firstly get a cutting by taking a section of non-flowering stem and cut it free with a clean knife from just below a leaf joint. Remove the leaves immediately above the cut. Get hold of a thin sheet of polystyrene and punch some small holes in it. Thread the stems of your cuttings though the holes so the remaining leaves are on the top surface of the polystyrene. Smart tips to make life easier Posted on February 24, 2012 in Humor If you’re new here, you may want to subscribe to our RSS feed or follow us on Facebook or Twitter . Thanks for visiting! Rate this Post (16 votes, average: 5.00 out of 5) Loading...

Craftaholics Anonymous™ Learn how to turn old t-shirts into pom poms! T-shirt Pom Poms are so much more durable than tissue paper ones. And I think they look loads better! got an old tee or two {or 20!} Carved Book Landscapes by Guy Laramee (click images for detail) For the better part of three decades multidisciplinary artist Guy Laramee has worked as a stage writer, director, composer, a fabricator of musical instruments, a singer, sculptor, painter and writer. Among his sculptural works are two incredible series of carved book landscapes and structures entitled Biblios and The Great Wall, where the dense pages of old books are excavated to reveal serene mountains, plateaus, and ancient structures. Of these works he says: So I carve landscapes out of books and I paint Romantic landscapes. Mountains of disused knowledge return to what they really are: mountains.

Lagoonia Lagoonia was a browser-based social game developed and published by InnoGames which gave players the opportunity to build up their own tropical island paradise. The focus of Lagoonia was the social interaction between the players like talking, playing together or flirting. It also offered a variety of options in character development and witnessing the whole life circle of a character from birth to death. Starting out as the survivor of a plane crash, players of Lagoonia had to begin a new life on a deserted island. The first steps in the island game were to make sure that basic needs such as fire, food, water, and shelter were covered.

The Suntracking Shelter This is the sun shelter with an adjustable canopy that provides respite from the sun any time of the day without requiring relocation. Two canopy panels slide along the shelter's frame and lock into place to provide shade no matter where the sun is in the sky. The polyester panels earned The Skin Cancer Foundation's Seal of Recommendation for providing superior protection from harmful UV rays. The frame is 7' high and covers nearly 60' sq., enabling set up over a patio table or three beach chairs. The frame is made from durable anodized aluminum and has four 8"-diameter stainless steel feet, providing resistance to winds as strong as 30 mph.

DIY Party Animal Candles Hi there, it’s Jenny from Hank + Hunt with a fun and super easy diy today! As soon as I thought of making these I got a huge kick out of naming them Party Animals. Hilarious, but if you hear groaning…it’s coming from my house. Regardless of how cheesy the name is, these turn out awesome. Using Up That Sweater So I had some leftover sweater material from the pumpkins I made. The sweater did not felt like I thought it would when I washed it because it wasn’t all wool. But it still was really soft so I thought why not a pillow. I had a bed pillow I wasn’t using so I just cut it down and used it as the insert. Then I cut the body of the sweater from armhole to armhole. I had already cut the sleeves off since that is what the pumpkins are made out of.

Illustrator Rob Dobi Thinks Your Scene Sucks! Jun 19, 2011 / Category : Misc / 22 Comments We are all victim to the atrocities of today's many scenes and subscenes. Whether you choose to accept it or not, this reality affects us all in one way or another. We all deal with it in different ways, some keep themselves locked up in isolation, holding onto the hope that the scene won't penetrate their stronghold, others simply give in and take on a life of scenesterism tragic. It's got to the point where you need to know what signs to look out for, where not to be at the wrong time, and most importantly, to know your scenesters. YourSceneSucks helps you define which totally sucky scene you belong to: Apple Store Indie, maybe Hipster Jesus?

Religion is like a penis... Advertising Architecture Clothing Drawing/Painting Unfinished, Undone, (yet somehow not) coming Unglued Have you ever seen this plant? It is called ‘wedding veil’ (at least that is what the 9 year old said that sold it to me at our local farmer’s market). I love it. It is just now starting to bloom and I’m told there will be many more white flowers that spread across it’s leaves. So many in fact that herein lies the origin of its’ name. About What was Punchfork? Punchfork was the easiest way to discover the best new recipes from top food sites and share them with family and friends. We used social data from Facebook and Twitter to rank the most popular recipes around the web and present the results in a beautiful, magazine-like visual layout. Punchfork brought users the latest recipes and dishes that were trending on popular food blogs like Smitten Kitchen, Simply Recipes, 101 Cookbooks, The Pioneer Woman and more. Mission Our wider mission was to build tools that help people cook at home more often and more enjoyably, a goal that continues on at Pinterest.