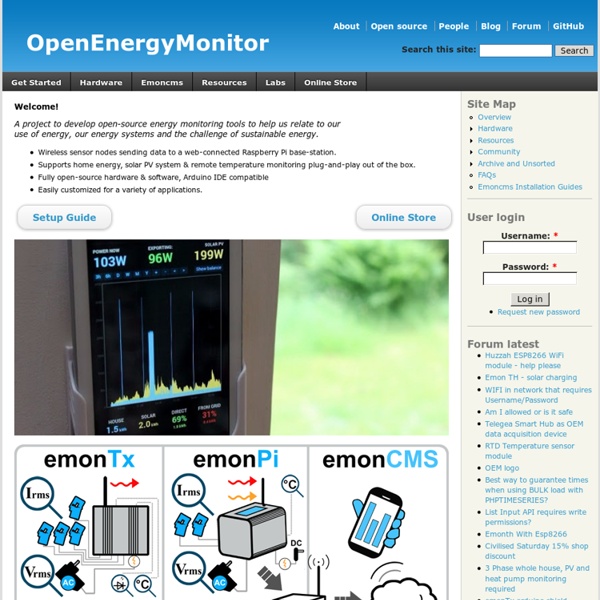 Energy Producing Land Art Energy Producing Land Art. The Land Art Generator Initiative (LAGI) brings together artists, architects, scientists, landscape architects, engineers, and others in a first of its kind collaboration. The goal of the Land Art Generator Initiative is to design and potentially construct public art installations that uniquely combine aesthetics with utility-scale clean energy generation. The works will serve to inspire and educate while they provide renewable power to local residents. the Open Source PID Controller A fantastic project has been making the rounds over the last two days: Hakerbot Labs put together a monster laser that pierced the sky at Toorcamp. Continue reading The osPID Kit is back in stock and ready to ship. Continue reading We have just picked up our batch of assembled osPID Kit boards from the factory.

AMON vs. SensorML/O&M AMON is a data format, developed by AMEE, suitable for the description and exchange of metering and monitoring device data by anyone who has a need to describe or exchange, in a computer readable format, metering or monitoring device data. You can find the full details of AMON at However, AMON is not the only standard in the field of metering & monitoring device data exchange. One prominent alternative is the combination of Sensor Model Language (SensorML) and Observations & Measurements [XML Implementation] (O&M), from the Open Geospatial Consortium (OGC). But what are the differences between the two standards?

EVE Alpha - Raspberry Pi wireless development hardware by Ciseco Eve is a plug in board for the Raspberry Pi mini computer A hub that connects your wireless devices to each other and the web.This is development hardware, we need your help to accelerate development of freely downloadable software.EVE is something YOU own not a service you rent. The Raspberry Pi EVE board is the reference hardware for the IoT Toolkit gateway ( It's work in progress, but will be available for general use soon. There will be software development on EVE. The guys behind OpenRemote which is a software integration platform for residential and commercial building automation have code that will already run on the Pi. VirtualWire Library, for very cheap wireless communication VirtualWire, by Mike McCauley (PDF), helps you use very inexpensive wireless radio modules. Download: VirtualWire.zip(version 1.15 - Teensy 3.0 support & minor improvements added) Very low cost RF modules require specially formatted data, with sync patterns, equal balance of 0 and 1 bits, and error checking. VirtualWire provides all of these features, allowing for best performance from very cheap radio circuits. Hardware Requirements

Algae Streetlight Microalgae Street Lamps (in prototype stage). French biochemist Pierre Calleja has invented a streetlight that is powered by algae AND which absorbs CO2 from the air. Pierre reports that one lamp can take 1 ton of CO2 out of the atmosphere per year. This is as much CO2 as an average tree absorbs during its entire 150 year life. Microsoft just open-sourced 60,000 of its patents The company has announced that it has joined the Open Invention Network (OIN), a community that is dedicated to protecting open- source software from patent lawsuits by technology giants like Google, IBM, and, yep, even Microsoft. The move by Microsoft is a surprising one since the company has always had a contentious relationship with the open-source community, something Erich Andersen, corporate VP and deputy general counsel, conceded in a blog post: We know Microsoft’s decision to join OIN may be viewed as surprising to some; it is no secret that there has been friction in the past between Microsoft and the open source community over the issue of patents. For others who have followed our evolution, we hope this announcement will be viewed as the next logical step for a company that is listening to customers and developers and is firmly committed to Linux and other open source programs. But Andersen goes on to say that Microsoft’s view of the open-source community has shifted:

Grove - Electricity Sensor Introduction The Electricity sensor module is a member of Grove. It is based on the TA12-200 current transformer which can transform the large AC into small amplitude. Using the LilyPad LilyTwinkle board Using the LilyPad LilyTwinkle board Skill Level: Beginner by Dia | September 27, 2012 | 10 comments Twinkle, Twinkle, Little LED The LilyPad LilyTwinkle and LilyTiny boards are a great stepping stone between simple circuits and Arduino circuits. Tesla's new $3500 10kWh Powerwall home battery lets you ditch the grid Tesla’s long awaited home battery is now on the market. Late in the evening on April 30, Tesla CEO Elon Musk kept his promise for his hotly anticipated announcement about the company’s next product line. Musk admitted the week prior that the announcement would indeed be about the home battery he promised earlier in the year, the details of which have been quite secretive until, well, the announcement. Musk took the stage at 8pm PST on a Thursday evening to make the announcement, in which he wowed the crowd by directing people to the Tesla website, where the stationary battery is already available for pre-order and scheduled to ship within a few months. With this announcement, Tesla has fulfilled the conclusion posited by Wired last week: they are no longer a car company. Tesla is now a battery company first, and a car company second.

Why Open Source Misses the Point of Free Software When we call software “free,” we mean that it respects the users' essential freedoms: the freedom to run it, to study and change it, and to redistribute copies with or without changes. This is a matter of freedom, not price, so think of “free speech,” not “free beer.” These freedoms are vitally important. They are essential, not just for the individual users' sake, but for society as a whole because they promote social solidarity—that is, sharing and cooperation.