Top 49 Tools For The Internet of Things 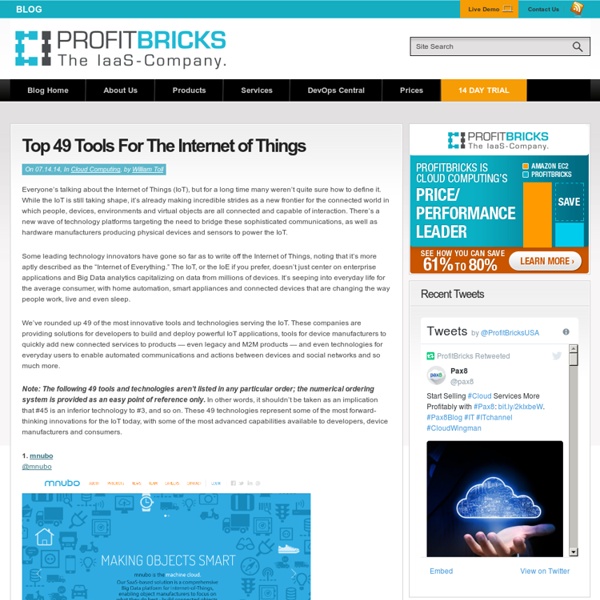 Everyone’s talking about the Internet of Things (IoT), but for a long time many weren’t quite sure how to define it. While the IoT is still taking shape, it’s already making incredible strides as a new frontier for the connected world in which people, devices, environments and virtual objects are all connected and capable of interaction. There’s a new wave of technology platforms targeting the need to bridge these sophisticated communications, as well as hardware manufacturers producing physical devices and sensors to power the IoT. Some leading technology innovators have gone so far as to write off the Internet of Things, noting that it’s more aptly described as the “Internet of Everything.” The IoT, or the IoE if you prefer, doesn’t just center on enterprise applications and Big Data analytics capitalizing on data from millions of devices. We’ve rounded up 49 of the most innovative tools and technologies serving the IoT. 1. mnubo@mnubo Key Features: Cost: Contact for a quote 2. 3. 4. 5.

Cloud-to-Cloud Integration to Enable IoT: What About Standards? Five Critical Questions to Ask Before Moving Data to the Cloud It occurs to me that as the Internet of Things emerges as a topic of increasing relevance to CIOs, one of the things they’re going to need to be concerned about is standards. As the cloud-to-cloud integration that is necessarily associated with IoT becomes more commonplace, that integration will entail the adoption of certain standards that may or may not be in place at this point. So where is all of this heading? I had the opportunity to discuss this topic with Shane Dyer, CEO of Arrayent, an IoT platform provider in Redwood City, Calif. We observe that at the end of the day, big markets, with revenue to be gained or revenue at risk of loss, drive standards. Dyer went on to say that a key factor inhibiting adoption is the application complexity of IoT: There are literally thousands of use cases that have nothing to do with one another. Winners are likely to be customers and suppliers.

Key Components of an IoT Application Platform The explosion of IoT (Internet of things) devices continues at a stunning pace, with an estimated 5 billion devices connected to the internet today and 25 billion expected by 2020. This massive growth also poses technology challenges for businesses seeking to capitalize on this trend, as these smart devices continue to receive, process, and transmit data on a massive scale using different protocols, data formats, backend services, and apps. I’ll be joining the “Solving Interoperability” speaking panel at IoT APPNATION tomorrow, July 21 where I will discuss how interoperability, or the lack thereof, will affect IoT app development. The AnyPresence app innovation platform is well positioned to support modern API, microservices and backend infrastructure needs of the nascent IoT market. Device connectivity software (hubs) Emerging software vendors such as Octoblu (Citrix), Zonoff, Ayla, and Arrayent are enabling smart devices to connect with everything, regardless of protocol or API.

The Internet of Things: EU vs US guidance | Insights | DLA Piper Global Law Firm In its February 2015 Report on the Internet of Things (IoT), the FTC estimated that there are now 25 billion connected devices worldwide. Another more conservative report by Gartner estimates there will be 2.9 billion connected devices in the consumer sector this year and 5 billion total, and that total will climb to 25 billion by 2020. Regardless of the accuracy of the numbers, clearly the growth of IoT presents unique challenges because of the sheer variety of “connected devices” – from sprinklers, to fitness trackers, to connected cars – and the data they may collect. It is therefore not surprising that regulators have released privacy and security guidance and frameworks for IoT. In September 2014, the European Commission’s Article 29 Working Party on Data Protection (WP 29 Report) released an Opinion,1 setting forth its interpretation of how EU data protection laws apply to IoT. Limiting anonymity – More use of connected devices suggests lower likelihood for maintaining anonymity.

The Internet of Things Robert MACDOUGALL The Alliance for Internet of Things Innovation (AIOTI) Policy Working Group makes cross-cutting policy recommendations for both the supply and demand side of the Internet of Things (IoT). Patrick GUILLEMIN Our AIOTI Working Group is developing and adopting global key standards to ensure effectiveness and interoperability, support economies of scale, enable data sharing and offer innovative new services. Roberto VIOLA A new European standard for smart appliances called SAREF has been launched in a record time: less than a year! Raph CROUAN Europe is undoubtedly the cradle of some of the most active Small & Medium Businesses (SMEs) in the world. Thibaut KLEINER Everybody is talking about the Internet of Things, the next digital revolution after mobile Internet. Communications networks will play an even more important role in our economies as the number of objects connected to the internet increases. Oscar DENIZ

How to invest in the Internet of Things (my 18 stock IoT index) How to invest in the Internet of Things In my rough framework of IoT I describe 7 categories that make the up the market with an 8th category of investment which as a believer in the opportunity I will explore in this post. Here are those categories again: 1. Sensing and Control 2. I have decided to put my own money where my mouth is on the investment opportunity and create an IoT portfolio that can act as an Index for this emerging market. Here are my first pass candidates by category: 1. a. b. c. d. e. f. g. h. i. j. 2. a. b. 3. a. b. c. d. 4. Security is a tough category; most of the major players are private or pre-IPO (Green Hills Software and Bromium for example). 5. Which OEM’s will benefit the most from IoT? a. b. 6. Not a lot of investment opportunity here unless one standard wins out over another and a manufacturer holds all the cards (Qualcomm with CDMA for example) and I don’t see that in IoT where a lot of the players support Open Source hardware and software. 7.

Infographic: Capitalizing on the Internet of Things Three industrial revolutions that have brought epic changes to the world of business are steam engines, mass production, and internet technology. Today, we are in the midst of what is often called the fourth industrial revolution – the convergence of physical things with the world of the internet: The Internet of Things. Let us give you three figures that show why the IoT creates challenges both long-term and immediate. First, consider the number of IP-enabled devices such as cars, heating systems or production machines. Based on research by the analyst firm Machina Research 14 billion of those things will be connected by 2022. Download infographic Your biggest competitor: Do nothing The internet has transformed the communications business, the media landscape, retailing, and the music industry. Three major challenges for existing business models and business functions For many companies, the mere prospect of remaking traditional products into smart and connected ones is daunting.

Internet of Things 2015 Forecasts of the Industrial IoT Connected Home and more BI Intelligence The Internet of Things (IoT) has been called the next Industrial Revolution — it will change the way all businesses, governments, and consumers interact with the physical world. For more than two years, BI Intelligence has closely tracked the growth of the IoT. In a new report from BI Intelligence, we discuss all of the components of the IoT ecosystem, including its devices, analytics, networks, and security. Here are some key points from the report: In total, we project there will be 34 billion devices connected to the internet by 2020, up from 10 billion in 2015. In full, the report: Distills the technological complexities of the Internet of Things into a single ecosystemExplains the benefits and shortcomings of many networks, including mesh (e.g. Interested in getting the full report? Subscribe to an All-Access pass to BI Intelligence and gain immediate access to this report and over 100 other expertly researched reports. PS.