5 Ways to Get High Without Drugs or Plants 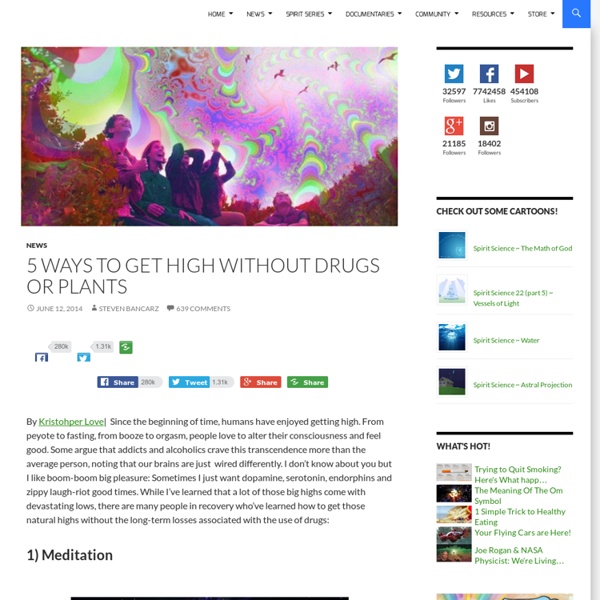 By Kristohper Love| Since the beginning of time, humans have enjoyed getting high. From peyote to fasting, from booze to orgasm, people love to alter their consciousness and feel good. Some argue that addicts and alcoholics crave this transcendence more than the average person, noting that our brains are just wired differently. 1) Meditation Getting high off of meditationNow this is an advanced thing and I stumbled upon it accidentally and was delighted. This is the only way, you have to keep doing it and keep increasing your concentration period. Advantages of getting high off of meditation This high that you get with meditation is not like marijuana where you are going to be high for hours (but if you can meditate for that long, then why not) but you have absolute control and you can come out of it whenever you want. On the contrary you will have medical benefits! 2. There is something special about moving your body to music you love that puts you in a special state of trance. 4. Related:  apmangat

Four Ways Mindfulness Can Make You a More Successful Entrepreneur | Dr. Elise Bialylew My path to becoming a social entrepreneur was an accidental one. I had spent many years as a doctor specialising in the field of psychiatry. In order to manage the stress of my work, I turned to meditation. It took a while before I was sold on it. For someone who thrived on being active it was almost intolerable to sit still. Our minds are our most precious resource; they are the source of happiness or depression, creativity or self-destruction, problem-solving or problem-making. Like many people who are driven to create and make things happen, I used to wonder why anyone would "just sit there" doing meditation. Three years ago I created Mindful in May, a global online meditation campaign that both teaches people how to meditate and raises money to build clean water wells in developing countries. Mindfulness has supported me along the path to becoming an accidental social entrepreneur. 1. 2. Being a good communicator is a fundamental ingredient in leading a team. 3. 4.

Tesla Release Electric Car Patents To Public A few days ago, we reported that Telsa Motors CEO Elon Musk had hinted he would be opening up patents to the Supercharger stations that charge their electric vehicles (EVs). This would have made it more convenient for competitors to enter or expand the EV market, reducing demand for traditional vehicles powered by gasoline. Today, Musk formally announced that Tesla Motors were not just opening up the patents for the Superchargers, but for all of the patents obtained by Tesla; over 200 in all. Musk released a blog entry on Tesla’s website entitled “All Our Patent Are Belong To You” which doubles as a potential massive advance for the EV market as well as the only good reference to that Zero Wing meme in the last decade. “When I started out with my first company, Zip2, I thought patents were a good thing and worked hard to obtain them,” Musk wrote. There are some minor stipulations for companies who want to use Tesla’s technology.

The New Alchemy - Alan Watts Alan Watts an essay from This is It and Other Essays on Zen and Spiritual Experience, by Alan Watts, Vintage Books, 1973, copyright Alan Watts 1958, 1960. This essay was written in 1960. Besides the philosopher's stone that would turn base metal into gold, one of the great quests of alchemy in both Europe and Asia was the elixir of immortality. In gullible enthusiasm for this quest, more than one Chinese emperor died of the fabulous concoctions of powdered jade, tea, ginseng, and precious metals prepared by Taoist priests. To many people such claims are deeply disturbing. However, it should be pointed out that there is nothing new or disreputable in the idea that spiritual insight Is an undeserved gift of divine grace, often conveyed through such material or sacramental means as the water of baptism and the bread and wine of the mass. It was not until a year later that I tried LSD again, this time at the request of another research team. This sensation raised a number of questions.

43 Simple Ways To Simplify Your Life Post written by Sherri Kruger. Follow me on Twitter. Simplicity. Reducing complexity in my life has reduced stress, increased free time, and top priorities are actually top priorities. 1. 2. 3. 4. 5. 6. 7. 8. 9. 10. 11. 12. 13. 14. 15. 16. 17. 18. 19. 20. 21. 22. 23. 24. 25. 26. 27. 28. 29. 30. 31. 32. 33. 34. 35. 36. 37. 38. 39. 40. 41. 42. 43. There are countless ways to simplify your life, these are but a few. Eco-moral Tribalism for Progressive Sustainability Ubuntu is a traditional African concept, which means ‘I am because we are’. It’s a term for humaneness, for caring, sharing and being in harmony with all of creation Progressive sustainability, as opposed to progressive unsustainability, is a challenging prospect. But can we all agree that we don’t want people to starve? There’s no cure for laziness. Let’s shrink our entire society down to a single tribe of ten tents with a single family in each tent. Maybe these other six hunters were lazy. …Unless the skilled hunter(s) share their meat (wealth) with the tribe so as to maintain a healthy tribe (eco-moral tribalism). This is a ridiculously simple concept to learn and to rationalize, and yet it is an excruciatingly complex concept to really understand and apply to everyday reality. Competition has always been secondary to cooperation; otherwise we wouldn’t have survived as species (Darwin). Image Source:Ubuntu: I am because we are Darwin

» 9 Mindfulness Rituals to Make Your Day Better :zenhabits “Smile, breathe and go slowly.” - Thich Nhat Hanh, Zen Buddhist monk Post written by Leo Babauta. Are you simply moving through your day, without fully living? I did this for many years. It was as if life were just passing by, and I was waiting for something to happen. But today isn’t preparation for tomorrow. Fully live today by being mindful. You don’t need to do all of these, but give a few of them a try to see if they make your day better. Mindfulness Rituals Ritual isn’t about doing a routine mindlessly. Here are a few of my favorites: 1. 2. 3. 4. 5. 6. 7. 8. 9. These rituals aren’t the only time you should be mindful, but they’re great reminders.

The Tao Te Ching Explained In Depth The Tao Te Ching, also known as the Dao De Jing, is an ancient attempt to point us toward our true nature written by the Chinese Sage, Lao Tzu, in 6th century B.C. Dao De Jing is best translated as "the Way and it's Power". The Dao cannot be revealed or explained adequately in words and yet this beautiful poem was made in an attempt to do so. Chapter 1 The Tao that can be spoken is not the eternal Tao The name that can be named is not the eternal name The nameless is the origin of Heaven and Earth The named is the mother of myriad things Thus, constantly without desire, one observes its essence Constantly with desire, one observes its manifestations These two emerge together but differ in name The unity is said to be the mystery Mystery of mysteries, the door to all wonders Thus the governance of the sage: Empties their hearts Fills their bellies Weakens their ambitions Strengthens their bones Let the people have no cunning and no greed So those who scheme will not dare to meddle

GMOs and the suicide epidemic affecting Indian farmers For years, it was little spoken of within the country’s own borders, but India is suffering from an escalating suicide epidemic that is gaining attention both internationally and in a new book by Seattle University journalism professor Sonora Jha. Entitled Foreign, the fiction piece tells the very real story of the tens of thousands of farmer suicides that occur annually in India, many of which are brought about by genetically modified organisms (GMOs) and associated crop technologies. Since 1995, explains Jha in a recent editorial for The New York Times (NYT), more than 290,000 Indian farmers have committed suicide. A combination of factors that include escalating debt and perpetual poverty are largely to blame for this, but these factors are predicated upon many decades’ worth of agricultural policy that encouraged the adoption of biotechnology to increase crop yields, a concept that has never actually worked. Sources for this article include: