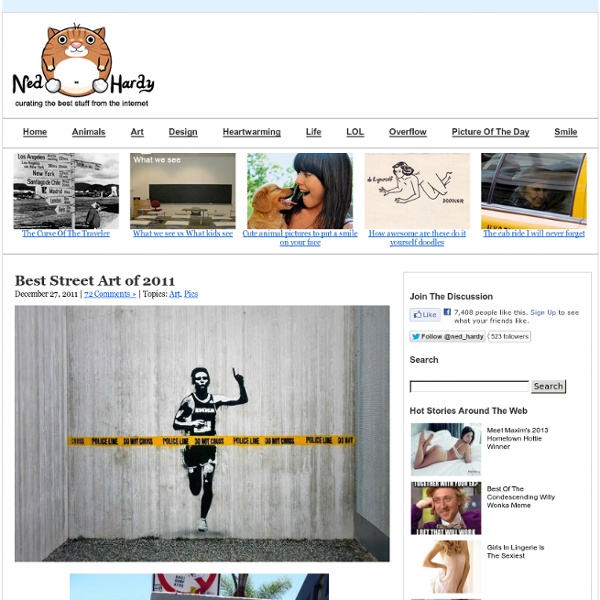 Circle Zip Earbud Pouch Tutorial - Dog Under My Desk I use a little zippered pouch to carry around my earbuds since they are the fancy microphone ones and I don’t want them to break or get tangled. Some of you have commented that you are looking for some small, simple gift ideas. This is definitely simple to make, and a little more fun than the typical rectangular zippered pouch! The Chromatic Typewriter Washington-based painter Tyree Callahan modified a 1937 Underwood Standard typewriter, replacing the letters and keys with color pads and hued labels to create a functional “painting” device called the Chromatic Typewriter. Callahan submitted the beautiful typewriter as part of the 2012 West Prize competition, an annual art prize that’s determined by popular vote. I don’t know how practical painting an image with a color typewriter is, but if Keira Rathbone can do it… (via dark silence in suburbia)

Club Of The Waves - StumbleUpon This art tutorial, kindly donated by surfing comic strip illustrator and surf artist Bob Penuelas covers how to draw a wave the Wilbur Kookmeyer way! If you're like me, then you've probably spent a lot of time in high school class daydreaming and doodling a thousand perfect cartoon waves in your notebook. It's safe to say that ninety percent of us surfers have a habit of scribbling perfect waves whenever a pencil is in our hands. Hopefully the following pointers will help you change your throw-away wave doodles into actual compelling artwork that you want to keep forever. Remember, there are millions of ways to draw a wave and hopefully with these simple pointers you'll find a million more. So, have fun.

This is What Happens When You Give Thousands of Stickers to Thousands of Kids This December, in a surprisingly simple yet ridiculously amazing installation for the Queensland Gallery of Modern Ar, artist Yayoi Kusama constructed a large domestic environment, painting every wall, chair, table, piano, and household decoration a brilliant white, effectively serving as a giant white canvas. Over the course of two weeks, the museum’s smallest visitors were given thousands upon thousands of colored dot stickers and were invited to collaborate in the transformation of the space, turning the house into a vibrantly mottled explosion of color. How great is this? Given the opportunity my son could probably cover the entire piano alone in about fifteen minutes. The installation, entitled The Obliteration Room, is part of Kusama’s Look Now, See Forever exhibition that runs through March 12.

Another great invention, the Exhaust Air Jack This invention is pretty sweet. It basically uses the air from your exhaust to inflate a big bubble that is strong enough to hold up your car. Once it’s to the right height, just turn off your engine and change your tire. The bubble will stay inflated for hours (if you are really bad at changing a tire). Incredible Wildlife Photography Wildlife — By Stephanie on January 11, 2010 at 10:58 am Canada goose protects her young Ever have one of those moments when you think to yourself, “Boy, I wish I had my camera?!” Well, you can enjoy the good fortune of the photographers who were not empty handed when they shot these amazing animal pictures. These high-speed images are treasures that tell stories we rarely get to see – let alone capture – in stunning detail. Incredible wildlife photography like this takes a steady hand and sharp eye.

Amazing Graffiti Art by Banksy Banksy is a well-known English graffiti artist, possibly named Robert Banks. His artworks are often satirical pieces of art which encompass topics from politics, culture, and ethics. His street art, which combines graffiti with a distinctive stenciling technique, has appeared in London and in cities around the world. Possibly born in Bristol in 1974, Banksy began as a freehand artist before switching to stenciling around the year 2000; his anti-war, anti-establishment and pro-freedom graffiti images began springing up on city walls in the late 1990′s. Although he has given numerous interviews and even published several books, Banksy’s true identity remains unknown. As written in DailyMail in March ‘08 Banksy pulled off an audacious stunt to produce what is believed to be his biggest work yet in central London.

201 Ways to Arouse Your Creativity Arouse your creativity Electric flesh-arrows … traversing the body. A rainbow of color strikes the eyelids. A foam of music falls over the ears. It is the gong of the orgasm. ~ Anais Nin Creativity is like sex. 55 Examples of Light and Clean Resume Designs Have a creative resume is important, because it will speaks your capability and cretivity. And clean design it will give a professional, clean impression to employer. In this showcase article we have collected 55 examples of creative resume with clean design style, I hope they will inspire you in designing your own creative resume that represent yourself.

Graphic Design Overglow – retrofuturistic logos Overglow is a project by Rome based designer Alessandro Strickner. » read more Let’s talk icons with Michael Flarup Mark Jenkins // Street Installations - StumbleUpon Besançon Rome Rio de Janeiro Tudela London Dublin Quilling - Turning Paper Strips into Intricate Artworks Quilling has been around for hundreds of years, but it’s still as impressive and popular now as it was during the Renaissance. The art of quilling first became popular during the Renaissance, when nuns and monks would use it to roll gold-gilded paper and decorate religious objects, as an alternative to the expensive gold filigree. Later, during the 18th and 19th centuries, it became a favorite pass-time of English ladies who created wonderful decorations for their furniture and candles, through quilling.