On the Phenomenon of Bullshit Jobs 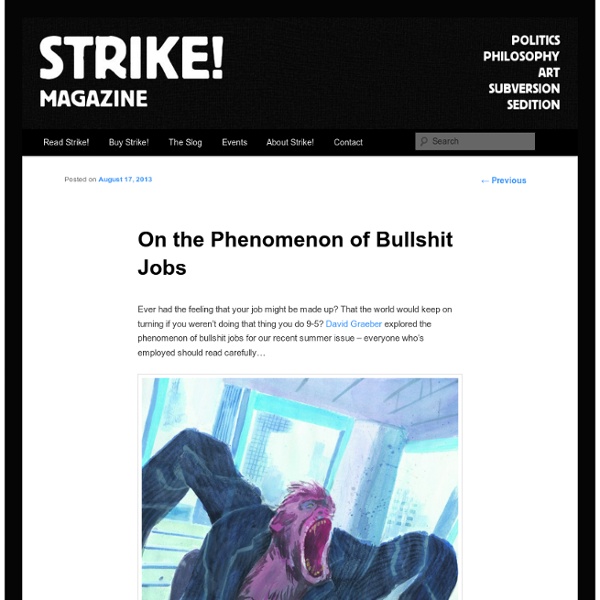 Ever had the feeling that your job might be made up? That the world would keep on turning if you weren’t doing that thing you do 9-5? David Graeber explored the phenomenon of bullshit jobs for our recent summer issue – everyone who’s employed should read carefully… On the Phenomenon of Bullshit Jobs by David Graeber. In the year 1930, John Maynard Keynes predicted that, by century’s end, technology would have advanced sufficiently that countries like Great Britain or the United States would have achieved a 15-hour work week. There’s every reason to believe he was right. Why did Keynes’ promised utopia – still being eagerly awaited in the ‘60s – never materialise? So what are these new jobs, precisely? These are what I propose to call “bullshit jobs.” It’s as if someone were out there making up pointless jobs just for the sake of keeping us all working. The answer clearly isn’t economic: it’s moral and political. This is a profound psychological violence here. Pick up your copy of STRIKE!

Selfish traits not favoured by evolution, study shows 2 August 2013Last updated at 06:29 ET By Melissa Hogenboom Science reporter, BBC News Humans and animals could not evolve in a co-operative environment by being selfish, scientists say Evolution does not favour selfish people, according to new research. The Ethic of Marginal Value Recently David Graeber has gotten some attention for an essay on “the Phenomenon of Bullshit Jobs”, which is notable mostly for getting some important arguments about the nature of work into wider circulation than usual. Mainstream economists have taken notice of Graeber’s contention that much of the activity that people are compelled to perform in return for their wages is “effectively, pointless”. But the result of mainstream engagement, as often as not, is little more than a demonstration of the narrow perspective of the conventional economist. In that vein, I’m particularly enamored of this contribution from Alex Tabarrok at Marginal Revolution.

Investigative Reporter By Greg Palast for Vice Magazine When a little birdie dropped the End Game memo through my window, its content was so explosive, so sick and plain evil, I just couldn't believe it. The Memo confirmed every conspiracy freak's fantasy: that in the late 1990s, the top US Treasury officials secretly conspired with a small cabal of banker big-shots to rip apart financial regulation across the planet. When you see 26.3% unemployment in Spain, desperation and hunger in Greece, riots in Indonesia and Detroit in bankruptcy, go back to this End Game memo, the genesis of the blood and tears. The Treasury official playing the bankers' secret End Game was Larry Summers.

The Spirit Level authors: why society is more unequal than ever A lot has happened in the five years since we published our book, The Spirit Level. New Labour were still perhaps too relaxed about people becoming "filthy rich". And there was an assumption that inequality mattered only if it increased poverty, and that for most people "real" poverty was a thing of the past. Sometimes storing electricity makes no (energetic) sense Two of the major renewable energy sources, wind and solar power, are intermittent in that they can't always be relied on for power. Although there are many strategies for mitigating the impact of the interruptions, the intermittency is thought to place a limit on the percentage of renewable power that can be easily integrated into the electric grid (although the precise point at which it becomes a problem is a bit of a moving target). One approach to intermittency is to store electricity from these sources for use when they're not active.

A Libertarian Socialist Critique of the “Libertarian” Party and Ron Paul By Brian P. Ellis – The word “libertarian” is becoming an increasingly popular descriptor of political ideology in the US, though many in the US incorrectly associate libertarianism only with the capitalist Libertarian Party. Historically libertarianism was a term used most commonly by anti-authoritarian socialists to describe their political philosophy. Should we worry about 'unproductive' financial sector gobbling up our best? Are too many of our most talented people choosing careers in finance – and, more specifically, in trading, speculating, and other allegedly unproductive activities? In the United States, 7.4% of total compensation of employees in 2012 went to people working in the finance and insurance industries. Whether or not that percentage is too high, the real issue is that the share is even higher among the most educated and accomplished people, whose activities may be economically and socially useless, if not harmful.

Is The US Military The Real ‘Terrorist?’ Todays mainstream media is being viewed under a ‘critical thinking’ microscope more now than ever before. As we begin to realize the various agendas each news corporation acts upon when reporting news, we begin to see through the different political styles available and look more critically at what is really happening. I titled this article the way I did not to point fingers or label anyone, but to encourage us to think about things in a new light. I feel guilt anytime I see a young girl, like the one I grabbed by the arm and dragged into the street.