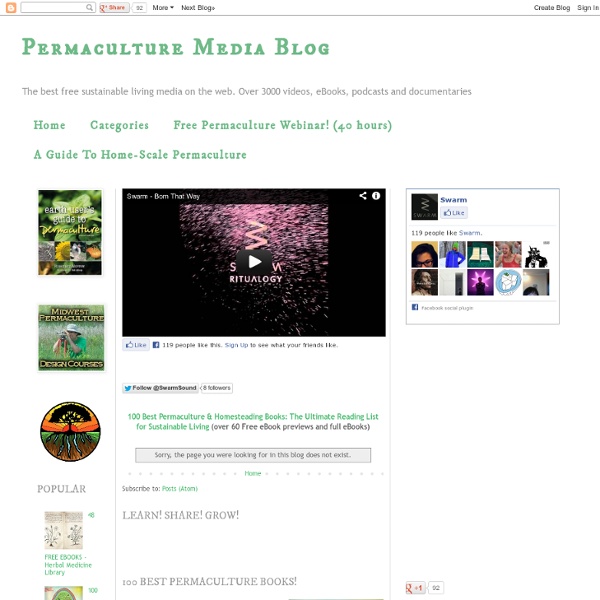 Permaculture means 'permanent culture,' (or 'permanent agriculture') and ...'is the conscious design and maintenance of cultivated ecosystems that have the diversity, stability, and resilience of a natural ecosystem.' (Bill Mollison) This course will explore, through lectures, discussions, field trips, and required projects, a design/thinking methodology that seeks to profide for our physical needs, food, water, shelter, energy, etc., while doing so in an environmentally friendly, sustainable manner. Download all lectures for Free here: Watch online all lectures for Free here: See also: Introduction to Permaculture - 18 part webinar with Bill Wilson of Midwest Permaculture - This is an 18 part 90 minute intro to permaculture webinar with Bill Wilson of Midwest Permaculture in Illinois. Documentary Films - Permaculture / Organic FarmingEbooks - Permaculture & Forest Gardening Free Documentary Films ArchiveFree Full Ebooks Archive

Permaculture / Organic Farming - Documentary Films Archive // May 1st, 2012 // agriculture With information on mushroom cultivation, sowing a fruit forest, alternative ways to keep livestock, and more… Sepp Holzer farms steep mountainsides in Austria 1,500 meters above sea level. His farm is an intricate network of terraces, raised beds, ponds, waterways and tracks, well covered with productive fruit trees and other vegetation, with the farmhouse neatly nestling amongst them. "One Good Thing" by Jillee: No-Grate Homemade Laundry Soap Despite all the enthusiasm over making homemade laundry detergent recently…I continue to hear murmurings from those who just can’t bring themselves to grate soap and cook it on the stove. It apparently just isn’t going to happen. :-) I’m not naming any names…but my older sister would probably freely admit she didn’t decide to even attempt making her own laundry detergent UNTIL I told her about this “new” recipe I was testing out. (I know it seems like I’m always “picking on” her…but she called me a “brat” on her blog recently…so she pretty much deserves it. lol). Once again I have to credit the incredible readers of this blog for my inspiration. Tiffanie posted this on February 4th….A close friend of mine has been making laundry soap like this one for years, until just recently she found an easier one to make and passed it on to us.

Free eBooks Archive - Permaculture Media Blog See also: On the Duty of Civil Disobedience by Henry David Thoreau - Civil Disobedience is an essay by Henry David Thoreau that was first published in 1849. It argues that people should not permit governments to overrule or atrophy their consciences, and that people have a duty to avoid allowing such acquiescence to enable the government to make them the agents of injustice. Thoreau was motivated in part by his disgust with slavery and the Mexican-American War. Plants For A Future: Survey and Research Project on 'The Field' - A report is now available of the recently completed survey and research project on the 'The Field', the experimental site of Ken and Addy Fern ( Plants For A Future founders) in Cornwall, where they carried out research and provided information on edible and otherwise useful plants suitable for growing outdoors in a temperate climate.

Plant Guilds Booklet Midwest US Permaculture We teach the fundamentals of plant guild design at every Permaculture Design Certificate (PDC) course we host.Here is our Upcoming Schedule From the Forward of the Plant Guild eBooklet As Midwest Permaculture grew, so did the number of requests from people looking for information and recommendations concerning what plants to add or combine to an existing tree on their landscape to create a useful plant guild. We referred them to Midwest Permaculture’s “Official Plant Guy”, Bryce Ruddock, who chairs the discussions of Plant Guilds on our networking site. Eventually, we asked Bryce to design some foundational guilds as every day examples that would help guide those who are new to permaculture.

The Food Forest Card Game You probably already know that I am in “shameless self-promotion” mode with the Food Forest card game. Fortunately for all of us, the campaign will soon be drawing to a successful close! The game will eventually be available to the general public but this is the last call for now. If you know anyone who wants a copy, or to show their support, please spread the word. Any final pledges will make our job a whole lot easier! Living Paper-Free and Loving It: 15 Tips for Creating a Paperless Home “Use it up, wear it out, make it do, or do without” [I] detest useless waste. It literally makes me crazy to think of spending money on something — usually out of convenience – knowing that the end result will be the trash. Paper towels, diapers, wipes, disposable anything, and yes even toilet paper…for nearly a year our family has been on a mission to find sustainable replacements for these common household items in an attempt to create a paperless home. Many people will argue that purchasing and using paper products doesn’t effect their budget enough to warrant seeking reusable alternatives.

Free Documentary Films Archive - Permaculture Media Blog Permaculture Design for Orphans and Vulnerable Children Programming – Free eBook // May 1st, 2012 // Uncategorized A promising development approach for addressing food and nutrition insecurity for orphans and vulnerable children (OVC) is permaculture. In the context of OVC programming, permaculture helps guide communities toward permanent solutions for food and nutrition security, while ensuring that these options exist harmoniously within their environment. The purpose of this technical brief is to provide an overview of permaculture programming as a sustainable, non-donor-dependent tool for improving the health, food, and nutrition security and livelihoods of OVC and their families. Download the Permaculture Design for Orphans and Vulnerable Children Programming Technical Brief (PDF, 581 KB)

What if Permaculturists Designed our Cities? Interview with Richard Register SE: It seems that ecocities are permaculture on a larger scale. In what areas do you think ecocity thinkers can learn from permaculturists, and what can permaculturists do to scale up to city size? RR: It's relatively easy to experiment with permaculture. More Parklets Popping Up Around San Francisco Payton Chung's flickr page/viaDeepistan National Parklet When I last wrote about parklets in July of 2011, there were fourteen parklets in San Francisco. The city now claims 31 parklets and counting, with 39 in various stages of review. There has been a large demand for parklets in San Francisco, as evident by the amount of applications that the City Planning Department’s Pavement to Parks program has received during its three issuances for request for proposals. Parklets, small urban pocket parks, have transformed parking spaces into public places throughout San Francisco.

Introduction to Permaculture - 18 part webinar with Bill Wilson of Midwest Permaculture Interplanting and Beyond, An Excerpt from Gaia’s Garden // May 1st, 2012 // No Comments » // Uncategorized This coming Sunday, May 6, is International Permaculture Day! Introduction to Permaculture Gardening First of all, let's make sure we're clear on what permaculture gardening means: Permaculture is a word coined from "permanent" and "agriculture" but it's not just about gardening; it's about a whole new outlook on growing food for your family, using the rules of the physical universe to help. Bill Mollison, often called the Father of Permaculture, first started to think about how all the systems around us should be integrated into a holistic approach. Instead of keeping the garden separate from all the other things going on in and around our dwellings, why not incorporate everything in a supportive way?