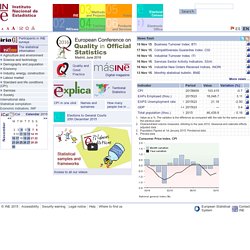 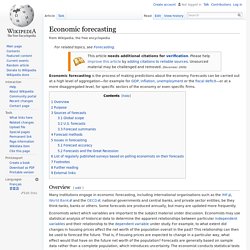 Forecasts can be carried out at a high level of aggregation—for example for GDP, inflation, unemployment or the fiscal deficit—or at a more disaggregated level, for specific sectors of the economy or even specific firms. Overview[edit] Many institutions engage in economic forecasting, including international organisations such as the IMF, World Bank and the OECD, national governments and central banks, and private sector entities, be they think-tanks, banks or others. Some forecasts are produced annually, but many are updated more frequently. Economists select which variables are important to the subject material under discussion. The economist typically considers risks (i.e., events or conditions that can cause the result to vary from their initial estimates).

Purpose[edit] Forecasts are used for a variety of purposes. Sources of forecasts[edit] Global scope[edit] U.S. forecasts[edit] The U.S. Forecast methods[edit] Forecasting and Econometric Models: The Concise Encyclopedia of Economics. An econometric model is one of the tools economists use to forecast future developments in the economy. 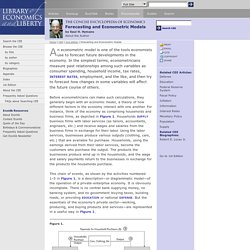 In the simplest terms, econometricians measure past relationships among such variables as consumer spending, household income, tax rates, interest rates, employment, and the like, and then try to forecast how changes in some variables will affect the future course of others. Before econometricians can make such calculations, they generally begin with an economic model, a theory of how different factors in the economy interact with one another. For instance, think of the economy as comprising households and business firms, as depicted in Figure 1. Households supply business firms with labor services (as tailors, accountants, engineers, etc.) and receive wages and salaries from the business firms in exchange for their labor.

IMF warns of stagnation threat to G7 economies. The International Monetary Fund is warning that the weak recovery in the west risks turning into near stagnation after cutting its global economic growth forecast for the fourth successive year. 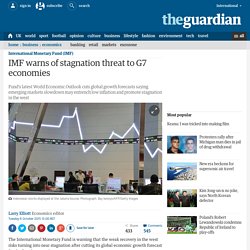 In its half-yearly update on the health of the world economy, the Washington-based fund predicted expansion of 3.1% in 2015, 0.2 points lower than it was expecting three months ago and the weakest performance since the trough of the downturn in 2009. “Six years after the world economy emerged from its broadest and deepest postwar recession, a return to robust and synchronised global expansion remains elusive,” said Maurice Obstfeld, the IMF’s economic counsellor. “Despite considerable differences in country-specific outlooks, the new forecasts mark down expected near-term growth rates marginally, but nearly across the board. Moreover, downside risks to the world economy appear more pronounced than they did just a few months ago.” IMF Survey : Uncertainty, Complex Forces Weigh on Global Growth. 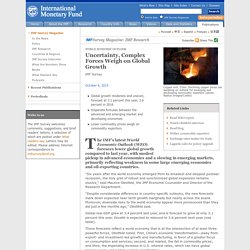 Economists React to U.S. GDP Growth: ‘Recovery Shifted Up a Few Gears’ Gross domestic product. A map of world economies by size of GDP (nominal) in USD, World Bank, 2014[1] Definition[edit] The OECD defines GDP as "an aggregate measure of production equal to the sum of the gross values added of all resident and institutional units engaged in production (plus any taxes, and minus any subsidies, on products not included in the value of their outputs).”[2] An IMF publication states that "GDP measures the monetary value of final goods and services—that are bought by the final user—produced in a country in a given period of time (say a quarter or a year). 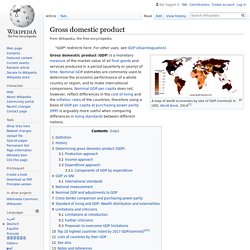 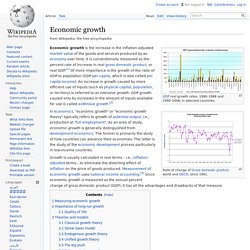 Economic growth is the increase in the inflation-adjusted market value of the goods and services produced by an economy over time. It is conventionally measured as the percent rate of increase in real gross domestic product, or real GDP.[1] Of more importance is the growth of the ratio of GDP to population (GDP per capita, which is also called per capita income). An increase in growth caused by more efficient use of inputs (such as physical capital, population, or territory) is referred to as intensive growth. GDP growth caused only by increases in the amount of inputs available for use is called extensive growth.[2] In economics, "economic growth" or "economic growth theory" typically refers to growth of potential output, i.e., production at "full employment".

Growth is usually calculated in real terms – i.e., inflation-adjusted terms – to eliminate the distorting effect of inflation on the price of goods produced. Research at the IMF. 行政院主計總處. 國家發展委員會. 中華民國經濟部(Ministry of Economic Affairs,R.O.C.)全球資訊網. 財團法人中華經濟研究院. 台灣經濟研究院全球資訊網.