Twitter users: A guide to the law. People who tweeted photos allegedly of child killer Jon Venables are being charged with contempt of court. 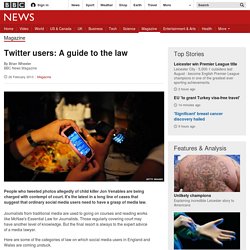 It's the latest in a long line of cases that suggest that ordinary social media users need to have a grasp of media law. Journalists from traditional media are used to going on courses and reading works like McNae's Essential Law for Journalists. Those regularly covering court may have another level of knowledge. But the final resort is always to the expert advice of a media lawyer. FBI — Social Media: Establishing Criteria for Law Enforcement Use. Over the past decade, social media has become a widespread presence that touches the lives of countless people, including law enforcement officers. 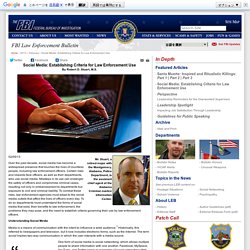 Certain risks and rewards face officers, as well as their departments, who use social media. Missteps in its use can endanger the safety of officers and compromise criminal cases, resulting not only in embarrassment to departments but exposure to civil and criminal liability. To combat these risks, law enforcement agencies must adapt to the social media outlets that affect the lives of officers every day.

To do so departments must understand the forms of social media that exist, their benefits to law enforcement, the problems they may pose, and the need to establish criteria governing their use by law enforcement officers. Untitled. Harvesting social media raises legal and ethical issues that must undergo careful consideration and risk assessment before the creation of a collecting program. 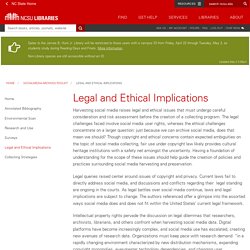 The legal challenges faced involve social media user rights, whereas the ethical challenges concentrate on a larger question: just because we can archive social media, does that mean we should? Though copyright and ethical concerns contain expected ambiguities on the topic of social media collecting, fair use under copyright law likely provides cultural heritage institutions with a safety net amongst the uncertainty. Having a foundation of understanding for the scope of these issues should help guide the creation of policies and practices surrounding social media harvesting and preservation.

Legal queries raised center around issues of copyright and privacy. Current laws fail to directly address social media, and discussions and conflicts regarding their legal standing are ongoing in the courts. . [2] Maria A. . [4] U.S. . [37] Ibid. Ajpe184. Social Media Hiring Practices. 200120 LEGAL%20ISSUES%20IN%20SOCIAL%20NETWORKING. Social media and the law: New Zealand case examples. As social media continues to become part of every day life, including work, there have been a number of New Zealand cases where the use of social media has played a part. 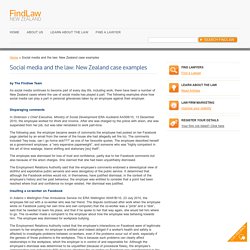 The following examples show how social media can play a part in personal grievances taken by an employee against their employer. Disparaging comments In Dickinson v Chief Executive, Ministry of Social Development ERA Auckland AA508/10, 13 December 2010, the employee worked for Work and Income. After she was charged by the police with arson, she was suspended from her job, but was later reinstated to work part-time. The following year, the employer became aware of comments the employee had posted on her Facebook page (alerted by an email from the owner of the house she had allegedly set fire to). The employee was dismissed for loss of trust and confidence, partly due to her Facebook comments but also because of the arson charges.

Insulting a co-worker on Facebook ‘Sick’ employee posted on Facebook. Rahman final. Social media's legal criteria - NZ Law Society. There once was a time, not long ago, when geeks governed the internet and laws of the physical world did not apply. 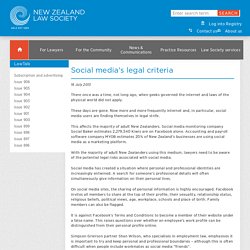 With the majority of adult New Zealanders using this medium, lawyers need to be aware of the potential legal risks associated with social media. Social media has created a situation where personal and professional identities are increasingly entwined. On social media sites, the sharing of personal information is highly encouraged. It is against Facebook’s Terms and Conditions to become a member of their website under a false name. Reference checking Brand management. Healthcare Professionals and Social Networking. Social media sites can be a great way for healthcare professionals to network with colleagues and share health information. 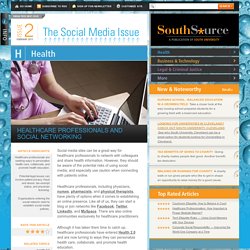 However, they should be aware of the potential risks of using social media, and especially use caution when connecting with patients online. Healthcare professionals, including physicians, nurses, pharmacists, and physical therapists, have plenty of options when it comes to establishing an online presence. Like all of us, they can start a blog or join networks like Facebook, Twitter, LinkedIn, and MySpace. There are also online communities exclusively for healthcare practitioners.

Although it has taken them time to catch up, healthcare professionals have entered Health 2.0 and are now turning to ways they can personalize health care, collaborate, and promote health education.