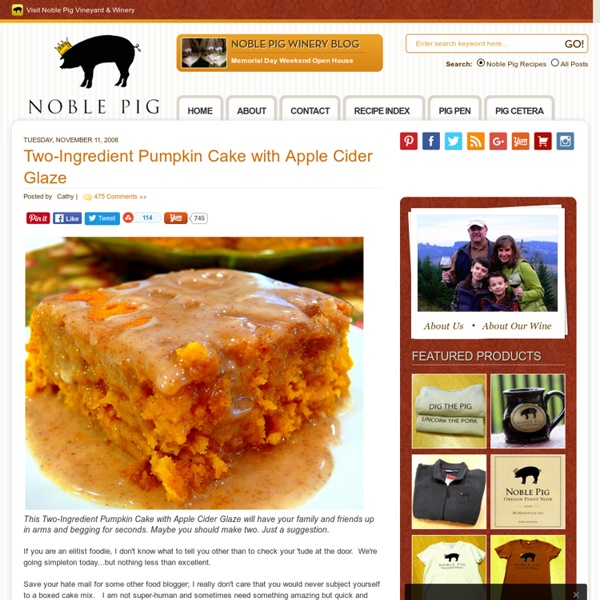 This Two-Ingredient Pumpkin Cake with Apple Cider Glaze will have your family and friends up in arms and begging for seconds. Maybe you should make two. Just a suggestion. If you are an elitist foodie, I don't know what to tell you other than to check your 'tude at the door. We're going simpleton today...but nothing less than excellent. Save your hate mail for some other food blogger; I really don't care that you would never subject yourself to a boxed cake mix. I've found it. I saw this recipe for Two-Ingredient Pumpkin Cake with Apple Cider Glaze on Robin Sue's blog, Big Red Kitchen, I knew I had to give it a shot. I baked the cake, made the glaze, took some pictures and had my first bite. After that bite I immediately threw down my fork (I can be very dramatic) and called my friend Tarri. I knew I could not be left alone with this cake, I would eat it all. Trust me here, this is good enough to serve at Thanksgiving. Let's make it together shall we... Here it is right out the oven.

Peas 4 Dinner Recipe Review: Hot Chocolate On A Stick | Apartment Therapy The Kitchn Previous image Next image Hot Chocolate on a Stick. The idea just sounds fabulous doesn't it? First, here's the recipe: • Hot Chocolate on a Stick from The Giver's Log The Giver's Log is a fabulous place to pick up other tricks on making household goods and snacks. You will need to make sure that the only liquid that goes into the mixture is the melted chocolate itself. Kept in an airtight container these treats last for a full year and can be decorated, adorned and packaged to your heart's desire. A Note About Not Using A Mold:When we made our recipe, we were short on the ice cube tray molds. The block is dense enough, regular knifes (heated or not) and bench scrapers just caused the chocolate to fracture in unattractive shapes, so we brought out our electric knife and went to town. One more tip, in case you'd like to give it a go in a pan: the shapes also might have cut cleaner with a regular hot knife had we scored the top before the chocolate was 100% cooled and hardened.

Material Science Madness: Crazy Metal Melts in Your Hand There is an incredible metal that shatters like glass, melts in a human hand, attacks other metals but is non-toxic to humans, and acts like an alien life form when exposed to sulfuric acid and dichromate solution. It sounds too amazing to be true, but gallium is an absolutely real chemical element that’s found in some of the gadgets we use every day. But perhaps more interestingly, there are a ton of insane experiments scientists like to do with gallium. Thanks to its odd properties and behavior, gallium can do some pretty strange things in the lab. The “gallium beating heart” experiment is a popular one that shows how gallium can act like a living thing when submerged in sulfuric acid and a dichromate solution. The melting gallium spoon is a fun demonstration that makes good use of gallium’s 85 degree (F) melting point.

What's Cooking, Sue? monkey bread recipe i’ve got a confession that will either make me seem really cool or really lame: i’m an eagle scout. i spent most of my teenage years camping and tying knots with my fellow boy scouts, learning the skills i would need to survive in the wilderness. and although i’ve never actually been lost in the wilderness (yet), i still use a lot of what i learned in the scouts every day. one of the coolest things about camping is figuring out how to cook gourmet meals with greatly reduced means. no oven, microwave, mixer, toaster, or *gasp* panini press. when we camped, the dutch oven monkey bread was made with ready-made biscuits that were torn up into smaller pieces and rolled in cinnamon and sugar. this recipe actually uses a sweet yeast dough that you let rise, but instead of baking it in a tube pan, i doubled the recipe and used my dutch oven so it would be brimming with gooey cinnamon sugar goodness. why is it called monkey bread?

How to Permanently Delete a Facebook Account Two Methods:Permanent DeletionTemporary DeactivationCommunity Q&A If you've decided that you’re done with Facebook, you're not alone — in recent years, an increasing number of users have opted to drop their accounts.However, the process of completely and permanently deleting your account is anything but intuitive. To start learning how to save all of the data you need and delete your account for good, see Step 1 below! Ad Steps Method 1 Permanent Deletion <img alt="Image titled Permanently Delete a Facebook Account Step 1" src=" width="728" height="546" class="whcdn" onload="WH.performance.clearMarks('image1_rendered'); WH.performance.mark('image1_rendered');">1Log in to Facebook. Method 2 Temporary Deactivation Community Q&A Ask a Question Can you answer these readers' questions? Tips Warnings Article Info Featured Article

A Year of Slow Cooking Caramel Apple Cupcakes September is finally here and all I can think about are all of the apple recipes I want to dig into. I’ve already lit my fall candles to get in the mood since we kind of have to fake the seasons over here in Florida. These caramel apple cupcakes smelled divine baking in the oven! Also, today my friend Micah from Micah Folsom Photography is having a photography giveaway. Ingredients Cupcakes: 1 (18.25-ounce) package spice cake mix 2 large eggs 1 cup sour cream 1/2 cup milk 1/3 cup vegetable oil 1 cup peeled, cored, and chopped Granny Smith apple (about 1 large apple) Caramel Sauce: 35 caramels 1/4 cup evaporated milk or heavy cream (or regular milk) 1/2 cup chopped pecans 24 wooden craft sticks Instructions Preheat oven to 350 degrees. Notes Source: America's Best Recipes

MAGIC: Evolution of NBA Team Logos By Josh Cohen ORLANDO-- When you need a sports history refresher, glance over the evolution of team logos and suddenly a 15-minute conversation about classic games and performances with your buddies transforms into an endless one. I recently decided to browse over the timeline of NBA logos for each active franchise and astoundingly there are so many moments that popped in my head. For instance: When I gaze at the Utah Jazz logo that existed from 1996-2004, I can’t help but think of John Stockton and Karl Malone and their unforgettable NBA Finals clashes with the Chicago Bulls in 1997 and 1998. The Atlanta Hawks emblem from 1972-1995 definitely reminds me of the days of Dominique Wilkins, while the Detroit Pistons symbol from 1979-1996 undoubtedly prompts me to think of Isiah Thomas and the Bad Boys of the late 1980’s. It’s also astonishing the transformations that certain teams have made over the years to their image. I have pasted in every franchise’s primary logo timeline below.

Cooking Books How to Make a Cake with Zebra Stripes on the Inside! | MyCakeSchool Blog Hi everyone! Happy Friday! Okay, it is just about 15 minutes until Saturday here, but I’m still going to call this a Friday blog -:0) — Let’s celebrate by making a zebra cake! In my last video tutorial, I demonstrated how to decorate a cake with zebra stripes–a very fun look for your safari, fashion or just plain funky themed cakes! By the way, I did not invent the zebra cake. First, let’s talk batter– You’ll most often see chocolate and white zebra cakes (although it would be fun to try a hot pink and white zebra cake sometime!) We went the boxed cake route and bought a box of Duncan Hines Devil’s Food Cake, and a box of Duncan Hines French Vanilla. We made slight changes to the box directions: French Vanilla Cake– We used 1 cup plus 3 Tablespoons Water rather than the 1 cup that it calls for. That’s it! Let’s get started! Two bowls of batter…. We started by dropping 1/4 cup of vanilla batter into the middle of our 8″ pan. Continue the process until your pans are approx 2/3 full. Hooray!

Space Plane History – NASA Air Force Space Plane Timeline NASA and the Pentagon have been investigating space plane technology for decades, but the space shuttle is the only one in actual operation. The efforts left a legacy of unique aircraft that generated the data used by aerospace engineers to create the X-37B. Advocates hope the current Air Force program will pave the way for future concepts. 1960s X-20 Dyna-Soar Agency: USAFType: Manned; experimental prototypePurpose: It was to be the first spacecraft to launch into space on a rocket and glide to land.Legacy: The program was canceled in 1963 before a plane was completed, but the research led to the space shuttle's delta wings. 1970s Agency: NASA, USAFType: Manned; test airplanePurpose: In dozens of test flights, two versions of the X-24 proved space planes can maneuver while gliding to Earth.Legacy:Flight tests validated that a space plane can land without using engines. Space Shuttle 1980s 1990s DC-X Clipper 2000s The Future Spacebus Space Bomber