How to Build a Memory Palace (with Sample) 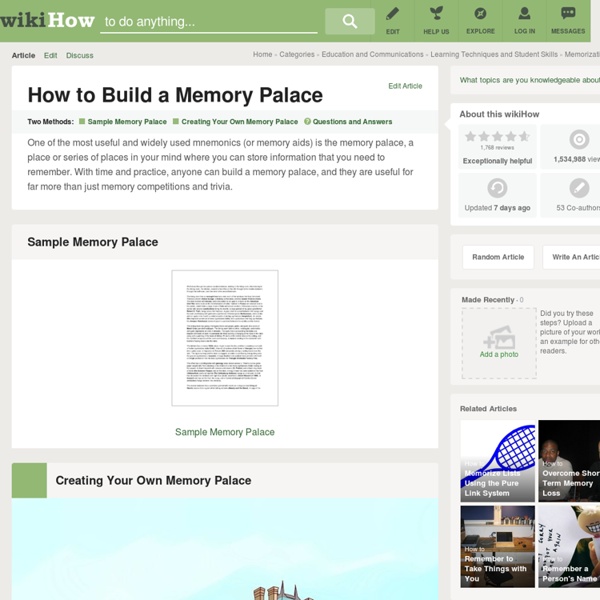 Using Pattern Recognition to Enhance Memory and Creativity - Maria Popova "If seven friends in turn rapidly told him their phone numbers, he could calmly wait until the last digit was spoken and then, from memory, key all seven friends' numbers into his phone's contact list without error." It seems to be the season for fascinating meditations on consciousness, exploring such questions as what happens while we sleep, how complex cognition evolved, and why the world exists. Joining them and prior explorations of what it means to be human is The Ravenous Brain: How the New Science of Consciousness Explains Our Insatiable Search for Meaning (public library) by Cambridge neuroscientist Daniel Bor in which, among other things, he sheds light on how our species' penchant for pattern-recognition is essential to consciousness and our entire experience of life. To illustrate the power of chunking, Bor gives an astounding example of how one man was able to use this mental mechanism in greatly expanding the capacity of his working memory.

Method of loci The method of loci (loci being Latin for "places"[1]), also called the memory palace or mind palace technique, is a mnemonic device adopted in ancient Roman and Greek rhetorical treatises (in the anonymous Rhetorica ad Herennium, Cicero's De Oratore, and Quintilian's Institutio Oratoria). In basic terms, it is a method of memory enhancement which uses visualization to organize and recall information. A lot of memory contest champions claim to use this technique to recall faces, digits, and lists of words. These champions’ successes have little to do with brain structure or intelligence, but more to do with their technique of using regions of their brain that have to do with spatial learning.[2] 'the method of loci', an imaginal technique known to the ancient Greeks and Romans and described by Yates (1966) in her book The Art of Memory as well as by Luria (1969). Contemporary usage[edit]

The Universal Mind of Bill Evans: Advice on Learning to Play Jazz & The Creative Process Bill Evans was one of the greatest jazz pianists of the second half of the 20th century. His playing on Miles Davis’s landmark 1959 record, Kind of Blue, and as leader of the Bill Evans Trio was a major influence on players like Herbie Hancock, Keith Jarrett and Chick Corea. “Bill’s value can’t be measured in any kind of terms,” Corea once said. “He’s one of the great, great artists of this century.” Evans’s approach to music was a process of analysis followed by intuition. He would study a problem deliberately, working on it over and over until the solution became second nature.

Home Page This wiki is a collaborative environment for exploring ways to become a better thinker. Topics that can be explored here include MemoryTechniques, MentalMath, CriticalThinking, BrainStorming, ShorthandSystems, NotebookSystems, and SmartDrugs. Other relevant topics are also welcome. Develop Perfect Memory With the Memory Palace Technique The Memory Palace is one of the most powerful memory techniques I know. It’s not only effective, but also fun to use — and not hard to learn at all. The Memory Palace has been used since ancient Rome, and is responsible for some quite incredible memory feats.

The Method of Loci This is the first part of your guide to get a memory like an elephant. Memory-Sports.com will give you an insight in the amazing techniques of all mental athletes, starting with the famous Method of Loci. You will learn how to memorize numbers, cards, names and words and discover the fascinating world of Memory Sports. The Method of Loci This technique is as old as ancient democracy: The method of loci, used by Greek and Roman senators to hold their intoxicating speeches in front of the senate. It was proscribed to use any kind of notes, so they were using this brilliant technique to jack up their memory.

The Creativity Myth — How to Fly a Horse In 1815, Germany’s General Music Journal published a letter in which Mozart described his creative process: When I am, as it were, completely myself, entirely alone, and of good cheer; say traveling in a carriage, or walking after a good meal, or during the night when I cannot sleep; it is on such occasions that my ideas flow best and most abundantly. All this fires my soul, and provided I am not disturbed, my subject enlarges itself, becomes methodized and defined, and the whole, though it be long, stands almost finished and complete in my mind, so that I can survey it, like a fine picture or a beautiful statue, at a glance. Nor do I hear in my imagination the parts successively, but I hear them, as it were, all at once. When I proceed to write down my ideas the committing to paper is done quickly enough, for everything is, as I said before, already finished; and it rarely differs on paper from what it was in my imagination.

Link Quickly When linking one image to another, the basis of all memory techniques, there are principles to follow for creating clear, vivid images that stay memorable. Be Ridiculous One of the most important principles in memory technique is that the image created should be as ridiculous and as imaginative as possible. If you're trying to link CHEF to PAN , it may be tempting to simply picture a chef cooking with a pan. This image is ineffective and easily forgotten because there is nothing remarkable about it. Mechanism of long-term memory identified Using advanced imaging technology, scientists from the Florida campus of The Scripps Research Institute have identified a change in chemical influx into a specific set of neurons in the common fruit fly that is fundamental to long-term memory. The study was published in the April 13, 2011 issue of The Journal of Neuroscience. "In studying fruit flies' learning and long-term memory storage, we observed an increase in calcium influx into a specific set of brain neurons in normal fruit flies that was absent in 26 different mutants known to impair long-term memory,," said Ron Davis, chair of the Scripps Research Department of Neuroscience, who led the study. "This logical conclusion is that this increase, which we call a memory trace, is a signature component of long-term memory."

A nap to recap: How reward, daytime sleep boost learning: Findings could benefit educators A new study suggests that receiving rewards as you learn can help cement new facts and skills in your memory, particularly when combined with a daytime nap. The findings from the University of Geneva, to be published in the journal eLife, reveal that memories associated with a reward are preferentially reinforced by sleep. Even a short nap after a period of learning is beneficial. "Rewards may act as a kind of tag, sealing information in the brain during learning," says lead researcher Dr Kinga Igloi from the University of Geneva.

Your Memory Palace: Method of Loci Memory Enhancing Technique The method of loci, also called the memory palace, is a mnemonic device introduced in ancient Roman rhetorical treatises. It relies on memorized spatial (of or relating to facility in perceiving relation of objects) relationships to establish, order and recollect memorial content. The term is most often found in specialized works on psychology, neurobiology, and memory, though it was used in the same general way at least as early as the first half of the nineteenth century in works on rhetoric, logic, and philosophy. Method of loci is also commonly called the mental walk. Natural growth factor enhances memory, prevents forgetting in rats A naturally occurring growth factor significantly boosted retention and prevented forgetting of a fear memory when injected into rats' memory circuitry during time-limited windows when memories become fragile and changeable. In the study funded by the National Institutes of Health, animals treated with insulin-like growth factor (IGF-II) excelled at remembering to avoid a location where they had previously experienced a mild shock. "To our knowledge, this is the first demonstration of potent memory enhancement via a naturally occurring factor that readily passes through the blood-brain barrier -- and thus may hold promise for treatment development," explained Cristina Alberini, Ph.D., of Mount Sinai School of Medicine, New York, a grantee of the NIH's National Institute of Mental Health (NIMH). Alberini and colleagues say IGF-II could become a potential drug target for boosting memory.

How to Memorize Things Quickly People like to joke that the only thing you really “learn” in school is how to memorize. As it turns out, that’s not even the case for most of us. If you go around the room and ask a handful of people how to memorize things quickly, most of them will probably tell you repetition. That is so far from the truth, it’s running for office. If you want to memorize something quickly and thoroughly, repetition won’t cut it; however, recalling something will. The problem is that recalling something requires learning, and we all learn in different ways.