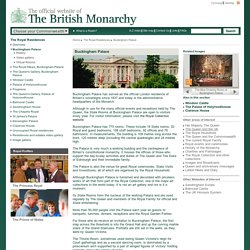 Although in use for the many official events and receptions held by The Queen, the State Rooms at Buckingham Palace are open to visitors every year. For visitor information, please visit the Royal Collection website. Buckingham Palace has 775 rooms. These include 19 State rooms, 52 Royal and guest bedrooms, 188 staff bedrooms, 92 offices and 78 bathrooms. In measurements, the building is 108 metres long across the front, 120 metres deep (including the central quadrangle) and 24 metres high. The Palace is very much a working building and the centrepiece of Britain's constitutional monarchy. The Palace is also the venue for great Royal ceremonies, State Visits and Investitures, all of which are organised by the Royal Household. It is in the Throne Room that The Queen, on very special occasions like Jubilees, receives loyal addresses. 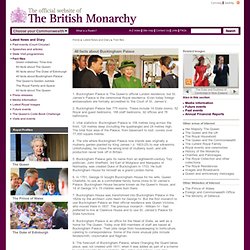 Buckingham Palace is The Queen's official London residence, but St. James's Palace is the ceremonial Royal residence. Even today foreign ambassadors are formally accredited to 'the Court of St. James's'. 2. 3. 4. 5. 6. 7. London Colouring Pages. This is Activity Village's collection of original London colouring pages. 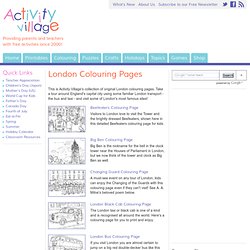 Take a tour around England's capital city using some familiar London transport - the bus and taxi - and visit some of London's most famous sites! Visitors to London love to visit the Tower and the brightly dressed Beefeaters, shown here in this detailed Beefeaters colouring page for kids. Big Ben is the nickname for the bell in the clock tower near the Houses of Parliament in London, but we now think of the tower and clock as Big Ben as well.

A must-see event on any tour of London, kids can enjoy the Changing of the Guards with this colouring page even if they can't visit! See A. The London taxi or black cab is one of a kind and is recognised all around the world. If you visit London you are almost certain to jump on a big red double-decker bus like this one! Print and enjoy this detailed colouring page of the London Olympic stadium, complete with sight-seeing children! Resources.sparklebox.org.uk/4000-5000/sb4624.pdf. Learn to Draw Buckingham Palace. Information on Buckingham Palace. Buckingham Palace is the Queen's official and main royal London home. 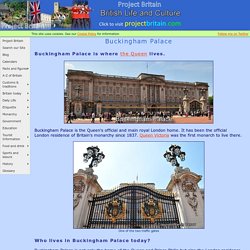 The Queen has other homes too including Windsor Castle and Balmoral in Scotland. Find out about her other castles and palaces Royal Flag When the Queen is at home, you can see her royal flag flying from the flag pole on top of Buckingham Palace. The flag is split into four quadrants. In flag protocol, the Royal Standard is supreme. Foot Guards Royal Parties.