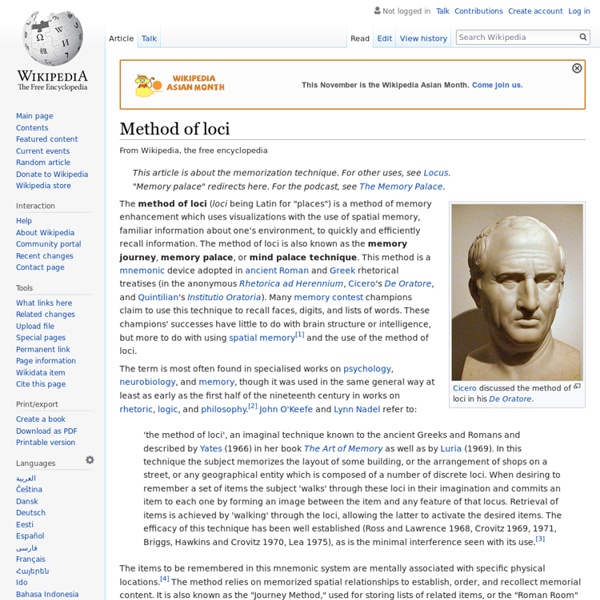 The method of loci (loci being Latin for "places"[1]), also called the memory palace or mind palace technique, is a mnemonic device adopted in ancient Roman and Greek rhetorical treatises (in the anonymous Rhetorica ad Herennium, Cicero's De Oratore, and Quintilian's Institutio Oratoria). In basic terms, it is a method of memory enhancement which uses visualization to organize and recall information. A lot of memory contest champions claim to use this technique to recall faces, digits, and lists of words. These champions’ successes have little to do with brain structure or intelligence, but more to do with their technique of using regions of their brain that have to do with spatial learning.[2] 'the method of loci', an imaginal technique known to the ancient Greeks and Romans and described by Yates (1966) in her book The Art of Memory as well as by Luria (1969). Contemporary usage[edit] Many effective memorisers today use the "method of loci" to some degree. In popular culture[edit]

The Surrealist Object Surrealism was initially practiced in written form as textual production, as a means of freeing the literary mind from “writerly” conventions. Just as Sigmund Freud took dictation, so to speak, writing down what his patients told him, the Surrealists would write down the contents of their minds. If only they could awaken that deep level where the subconscious thoughts dwelled. At first, Surrealists resisted the visual in favor of language. Pierre Naville, who aspired to leadership with André Breton, said bluntly, The Art of Memory The Art of Memory is a 1966 non-fiction book by British historian Frances A. Yates. The book follows the history of mnemonic systems from the classical period of Simonides of Ceos in Ancient Greece to the Renaissance era of Giordano Bruno, ending with Gottfried Leibniz and the early emergence of the scientific method in the 17th century.

Math Alive Course Instructors Ingrid DaubechiesShannon Hughes 218 (ID)/217 (SH) Fine Hall, Washington Road Princeton, NJ 08540-1000 You can find other contact information on a Contact us page. How is life different from 25 or even 10 years ago?