How to Develop a Photographic Memory 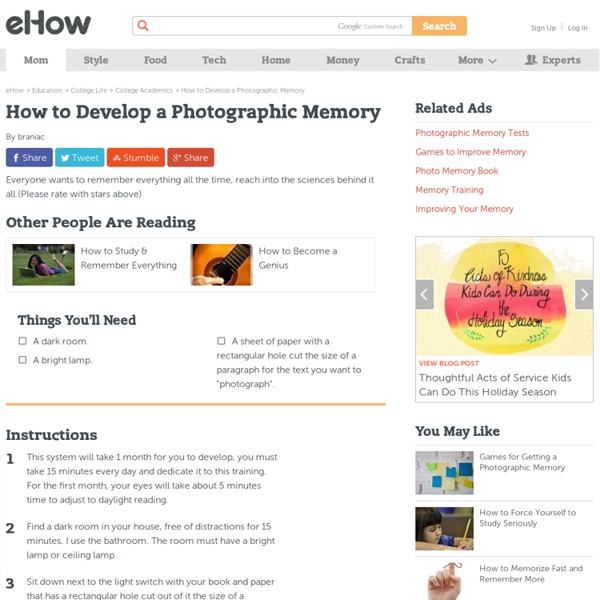 The Analysis of mind, by Bertrand Russell. Russell, Bertrand, 1872-1970. . The Analysis of mind, by Bertrand Russell. Electronic Text Center, University of Virginia Library hope you’re not too tired to read this… Check this out! As many curbs as I’ve hit, I might just need these tires! Resilient Tech has been testing these out for some time now, developing them for the military. Its a radical new design by Michelin and made in South Carolina. They are the next generation of tires and have already been previewed in Philadelphia at a car show.

The Danger Triangle of the Face Try wrapping your head around this: Your face is a picking time bomb. Of all the crude, pitiless eccentricities of the human body, the danger triangle of the face is arguably the most disconcerting of the lot in that, under rare and perfect conditions, this fleshy trinity can allow retrograde infections to creep from the front of your face to the recesses of your skull, where they lay waste to your brain. In so many words. The blood supply to this zone — a pyramid peaking at the bridge of the nose, with sides extending down to the corners of the mouth — is unique (see: rich), for one. But it’s also able to course freely between the facial vein and cavernous sinus by way of ophthalmic veins (these drain the eyes), flowing out from the skull and then back in, draining through the internal jugular vein. Has this poor girl unknowingly become the face of the danger triangle of the face?

How to find true friends (and love) in 45 minutes David Rowan Editor of Wired magazine This article was featured in Times Magazine, 5 November. Pythagorean cup Cross section Cross section of a Pythagorean cup. A Pythagorean cup (also known as a Pythagoras cup, a Greedy Cup or a Tantalus cup) is a form of drinking cup that forces its user to imbibe only in moderation. Can Going Without Money Hurt the Economy? One Man's Quest to Be Penniless Daniel Suelo is 51 years old and broke. Happily broke. Consciously, deliberately, blessedly broke.

Mental Heuristics Page A heuristic is a "rule-of-thumb", advice that helps an AI program or human think and act more efficiently by directing thinking in an useful direction. Some of these heuristics are age-old wisdom, bordering on cliche, but most are actually helpful. If you want something done, do it yourself Comment: Obviously true, and doing it is usually very good for your self esteem.

10 Ways to Reexamine Your Life We humans tend to get very comfortable with our circumstances. Change is always hard so staying the same often sounds like a great choice. However not changing some things can lead to stagnation, which leads to unhappiness and boredom. 40 websites that will make you cleverer right now The indexed web contains an incredible 14 billion pages. But only a tiny fraction help you improve your brain power. Here are 40 of the best. whizzpast.com – Learn about our awe inspiring past all in one wonderful place. khanacademy.org – Watch thousands of micro-lectures on topics ranging from history and medicine to chemistry and computer science.

10 More Mysterious Conspiracy Theories Mysteries To date we have around seven conspiracy theory lists or lists containing entries related to such. This new list is a welcome addition as it has been some time since our last one and they are always extremely fascinating topics to read about. The world is full of conspiracy theories – many of which contain elements of mystery. This will definitely not be the last list of this type. Theories surrounding the Ararat Anomaly arose from a single black and white photograph taken in 1949 by a USAF recon plane performing routine intelligence gathering of the Ararat massif, which was in an area of military interest at the time.

25 Beautifully Illustrated Thought-Provoking Questions A question that makes you think is worth asking… At the cusp of a new day, week, month, or year, most of us take a little time to reflect on our lives by looking back over the past and ahead into the future. We ponder the successes, failures and standout events that are slowly scripting our life’s story. This process of self reflection helps us maintain a conscious awareness of where we’ve been and where we intend to go.