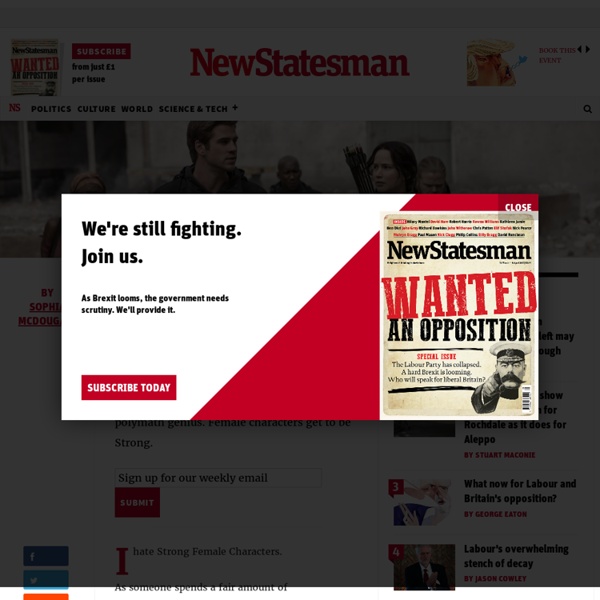 I hate Strong Female Characters. As someone spends a fair amount of time complaining on the internet that there aren’t enough female heroes out there, this may seem a strange and out of character thing to say. And of course, I love all sorts of female characters who exhibit great resilience and courage. I love it when Angel asks Buffy what’s left when he takes away her weapons and her friends and she grabs his sword between her palms and says “Me”. In Crouching Tiger, Hidden Dragon, I love Zhang Ziyi’s Jen sneering “He is my defeated foe” when asked if she’s related to Chow Yun-Fat's Li Mu Bai. I love Jane Eyre declaring “I care for myself” despite the world’s protracted assault on her self-esteem. But the phrase “Strong Female Character” has always set my teeth on edge, and so have many of the characters who have so plainly been written to fit the bill. I remember watching Shrek with my mother. “The Princess knew kung-fu! She rolled her eyes. Is Sherlock Holmes strong? 1. 2. Equality. No.

Women Fighters In Reasonable Armor Here’s a suggestion for reasonable armour in a more modern sense. She’s a soldier of IDS, a vicious PMC seeking to conquer a post-apocalyptic world in Advance Wars: Days of Ruin. I like it, very PMC-y. Thanks :) Women, democracy and dictatorship The electoral success of Islamic parties in Egypt, Tunisia and Morocco, has raised worries about policy and legislation on family and gender issues, this despite re-assuring noises from leading figures. Earlier electoral successes of Islamists in Iraq had brought about a disorderly mix of family policies and rule of disparate religious authorities, accompanied by much constraint and intimidation. This may be a good time to reflect on the record of various Middle Eastern countries on these issues over the course of the twentieth and twenty-first century and their relations to political regimes. In the early and middle decades of the twentieth century it was always dictators who embarked on policy and legislation which liberated and empowered women in both family and society. Ataturk started the process in Turkey, followed by Reza Shah in Iran, a model followed less boldly by some Arab leaders in later decades. Flickr/Al Jazeera English.

25 Best Movies About Education Ever Made When it comes to education, it seems as though there are always interesting issues to discuss. Issues of inequality, teacher pay, and other hot button subjects are always being tackled. This happens in real life, of course, but it also happens in the movies. In some cases, a movie can make what goes on in real life more poignant. This is especially true if you are dealing with a documentary. No, you're not entitled to your opinion Every year, I try to do at least two things with my students at least once. First, I make a point of addressing them as “philosophers” – a bit cheesy, but hopefully it encourages active learning. Secondly, I say something like this: “I’m sure you’ve heard the expression ‘everyone is entitled to their opinion.’ Perhaps you’ve even said it yourself, maybe to head off an argument or bring one to a close.

Domestic violence deserves the 'one punch' treatment and laws changed to protect women at work Earlier this year, the media's response to alleged "one-punch" killings was undoubtedly a highly successful campaign for legislative change. It sparked outcry across the country as governments scrambled to implement harsh, and arguably ineffective, legislation to address and prevent senseless violence. In stark contrast, despite significant campaigning over several years by various legal, social and government peak bodies, simple protections against the discrimination of women who are the victims of domestic violence are yet to be legislated. There has been some powerful literature on this topic in recent times, for example by Jill Meagher's husband, Tom Meagher. However, there has not been an imperative to address this issue in the civil law arena.

Things We Don't Talk About Share on Tumblr Things We Don’t Talk About: Woman’s Stories from the Red Tent is a groundbreaking 72-minute documentary film by award winning filmmaker Dr. Isadora Gabrielle Leidenfrost. Spontaneous and organic, a Red Tent is a red textile space where women gather to rest, renew, and often share deep and powerful stories about their lives. The Red Tent movement is changing the way that women interact and support each other by providing a place that honors and celebrates women, and by enabling open conversations about the things that women don’t want to talk about in other venues. Things We Don’t Talk About weaves together healing narratives from inside the Red Tent to shine a spotlight on this vital, emergent women’s tradition.

'Where Should I Go to College?' - Mark Edmundson Where should you go to college--assuming you're a high school student and getting ready for this new phase of your life? Where should you encourage your son or daughter to go--assuming that you're a parent? As a college professor, I get asked the where-to-go question frequently, and I know that all of us teaching in colleges and universities do too. 24 Rules Of Seduction 'Targets with active minds are dangerous: If they see through your manipulations, they may suddenly develop doubts. Put their minds gently to rest, and waken their dormant senses, by combining a nondefensive attitude with a charged sexual presence. While your cool, nonchalant air is lowering their inhibitions, your glances, voice, and bearing -- oozing sex and desire -- are getting under their skin and raising their temperature. Never force the physical; instead infect your target with heat, lure them into lust.

Body Image - Women, Websites and Body Image The pressure on women to look and behave in certain ways is so deeply ingrained in our psyches that it’s easy to overlook the impact mass culture has on how we feel about ourselves and our bodies. Watching TV, reading magazines and newspapers, surfing the Net, we are bombarded with airbrushed images of perfect beauty and thinness. Inevitably we absorb the relentless message that such beauty is the norm, and is achievable, if only we would … use this makeup, remove that hair, buy the right clothes, reshape that body part. Many of us know that the unspoken promise -- use our product, and you will get the love, the happiness, or the success you want -- is a lie.

50 Visually Appealing CSS Tutorials & Techniques If you are looking for in-depth articles on the inner workings of flexbox, or a comprehensive explanation for using CSS regions, then this is definitely not the post for you. Instead, we have squarely put our focus on those CSS tutorials that not only make the smaller details of the web visually appealing, but are also really useful. You know what we mean… fantastic text effects, innovative button styles, space-saving navigation systems, subtly animated form elements… that kind of thing. We have organised the tutorials and techniques into the following categories: Typography Techniques; Button Tutorials, Menu &amp, Navigation Techniques, Form Element Tutorials, SVG &amp, CSS Styling Techniques, Styling Anchor Links, Web Page Components Tutorials, CSS Layout Techniques, and finally a mixed bag of cool miscellaneous tutorials. Here you go…