TEDxOaklandUniversity. Predict a HOTTIE's Phone Number! - Get Digits at the Bar! 3 Easy Tricks to Approach Anyone at the Bar. You'll Never Flirt The Same After Watching This. 10 Smart Ways to Eliminate Your Fear of Rejection. Daygame - Direct Approach And Real Pickup Daytime. Night Game Masterclass Part 1 : Body Language, Non-verbal Opening, & Dance Floor Game. What to SAY if she has a boyfriend. Why Men Don’t Need To Worry So Much About Their Looks. The online dating site OkCupid’s crack team of SWPLs analyzed user data and made some interesting discoveries about men’s and women’s looks and how their attractiveness, or lack thereof, affects their profile response rate. 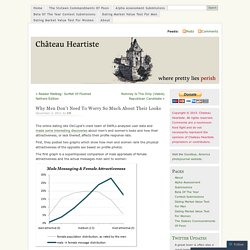 First, they posted two graphs which show how men and women rank the physical attractiveness of the opposite sex based on profile photos. The first graph is a superimposed comparison of male appraisals of female attractiveness and the actual messages men sent to women: Men have a very realistic appraisal system of women’s looks that clashes with their less realistic self-appraisal system of their chances to get the hottest babes.

As you can see from the graph, men accurately rate most fertile-age women as mediocre lookers, with smaller contingents of the very ugly and very beautiful. This assessment accords with reality. As we will see, men are more forgiving than women in their ranking of the opposite sex’s looks, but they are less forgiving in their message send rate. 15 Conversation Starters That Don't Suck  Imagine almost any situation where two or more people are gathered--a wedding reception, a job interview, two off-duty cops hanging out in a Jacuzzi. 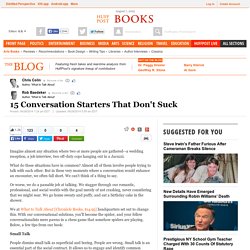 What do these situations have in common? Almost all of them involve people trying to talk with each other. But in these very moments where a conversation would enhance an encounter, we often fall short. We can't think of a thing to say. Or worse, we do a passable job at talking. We at What to Talk About [Chronicle Books, $14.95] headquarters set out to change this. Small Talk People dismiss small talk as superficial and boring. 4 Conversation Topics That Women Love to Talk About. 4 Failsafe Conversation Topics To Use When Talking to Women What should you talk about during the initial conversations that you have with a woman prior to dating and having a sexual relationship with her? 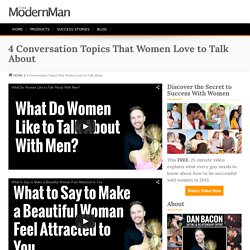 After much practice, testing and research, Ben, Stu and I have identified 4 conversation topics that almost every woman enjoys talking about. Those topics of conversation are: PetsTravelMoviesFood An example of a travel related conversation topic is, “If you could click your fingers and be in the ideal holiday location right now, where would it be?” How to Pick Up Girls Shopping for Gifts or Groceries. It's the holiday season, and that means one thing: time to pick up girls out shopping!

If you don't have much experience picking up women who are out shopping for shoes or shellfish, you might think this is rather hard... I mean, walking up to some girl in the middle of a well-lit store and just... hitting on her? Isn't that obvious? Actually, there are a number of more-or-less smooth ways of going about running pickups in shopping areas, whether malls or shops or grocery stores. A bit of a sense of humor and a good handle on indirect game helps; while you can use direct openers out shopping, they often come off a bit too strong. Mostly, what you'll be focused on creating in a shopping environment is a feeling of fate, fortune, or destiny... you and the girl met because you simply had to meet.

Today, we'll talk about how you go about creating that feeling, and help you bring some holiday cheer into the lives of some beautiful, lonely women out in the wide world. 20 Ways to Talk to Women and Make It AMAZING. Lately we've had a number of readers asking about more ways to talk to women and keep the conversation going. 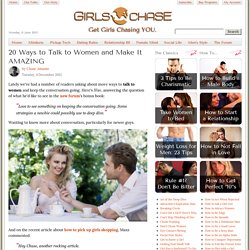 Here's JFav, answering the question of what he'd like to see in the new forum's bonus book: “Love to see something on keeping the conversation going. Some strategies a newbie could possibly use to deep dive.” Wanting to know more about conversation, particularly for newer guys. And on the recent article about how to pick up girls shopping, Maxz commented: “Hey Chase, another rocking article.Question for you man, I have been having problems on the conversational aspect of the game lately. Attract women. Share on Facebook Tweet on Twitter Page 2 of 5 no more appreciation When you tell a woman that she looks beautiful, you may think that you're scoring points, but the fact of the matter is that you're not the first — or last — chump to tell her. 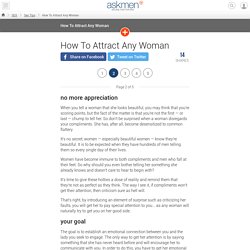 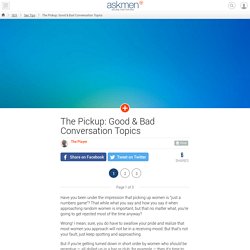 That while what you say and how you say it when approaching random women is important, but that no matter what, you're going to get rejected most of the time anyway? Wrong!