Women in Nazi Germany Homework Dec 16. GCSE Bitesize - Women in the Nazi state. Challenge website: The Nazi 'ideal' woman. In the Third Reich, the role of women was s haped by Nazi ideology and politics in order to ﬁt the needs of the government and nation as a whole. 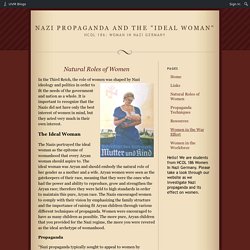 It is important to recognize that the Nazis did not have only the best interest of women in mind, but they acted very much in their own interest. The Ideal Woman. Nazi Magazine for Women: NS-Frauen-Warte Covers from 1941-1945. The Frauen Warte was the Nazi Party’s biweekly illustrated magazine for women. 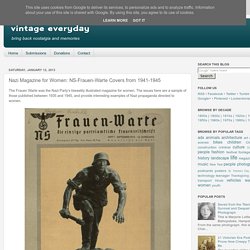 The issues here are a sample of those published between 1935 and 1945, and provide interesting examples of Nazi propaganda directed to women. (German Propaganda, via Retronaut) WATCH ME Women in Nazi Germany.