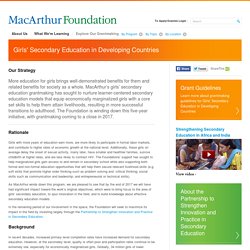 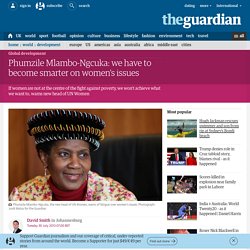 The Zimbabwe president, Robert Mugabe, castigated Lindiwe Zulu, a top South African diplomat, as an "idiotic street woman" and urged his South African counterpart, Jacob Zuma, "to stop this woman of theirs from speaking on Zimbabwe". Far from challenging Mugabe's crude chauvinism, Zuma publicly distanced himself from Zulu and gagged her. "I thought it was really unfortunate because she's there as a professional," Mlambo-Ngcuka says. "Her gender is neither here nor there.

" And South Africa's response? Formerly the deputy president of South Africa, Mlambo-Ngcuka takes the helm next month at UN Women, a three-year-old agency still striving for enough funds, recognition and a chance to make its mark. The 57-year-old replaces Michelle Bachelet, who resigned in March to run for another term as president of Chile, at a time when some perceive a global backlash against women's rights. Titled. The primary education system in India suffers from numerous shortcomings, not the least being a dire lack of the financial resources required to set up a nationwide network of schools. 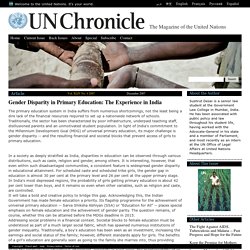 Traditionally, the sector has been characterized by poor infrastructure, underpaid teaching staff, disillusioned parents and an unmotivated student population. In light of India's commitment to the Millennium Development Goal (MDG) of universal primary education, its major challenge is gender disparity -- and the resulting financial and societal blocks that prevent access of girls to primary education. 7 GED 2010 gender disparity. Login – Concordia Online. Login – Concordia Online. Why investing in education for girls is in everyone's interest. The campaign for girl's education, grounded in human rights and equality, has been taking place for over two hundred years. 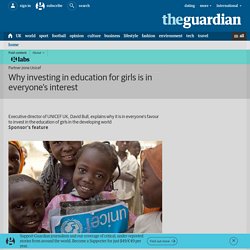 Happily, in the UK we are now at a point where there is no question of whether girls should have access to the same education as boys. There was never a danger that my daughter would be denied an education but for millions of girls around the world this is not the case. This is an injustice, not just for the individual but for society as a whole. It is in all of our interests, individuals, businesses and governments, to ensure that every child, regardless of their gender, ethnicity, socioeconomic background or circumstances can gain the education they deserve.

The Millennium Development Goals set a target of achieving universal primary education by 2015, and despite making significant progress there is still a way to go before this goal is reached. The benefits for girls on an individual level are well-established. Download. Login – Concordia Online. Factors Affecting Women Enrolment In Technical Institutions In Tanzania A Case Study Of Arusha Technical College. 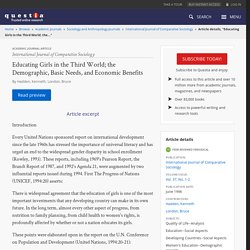 These reports, including 1969's Pearson Report, the Brandt Report of 1987, and 1992's Agenda 21, were augmented by two influential reports issued during 1994. First The Progress of Nations (UNICEF, 1994:20) asserts: There is widespread agreement that the education of girls is one of the most important investments that any developing country can make in its own future.