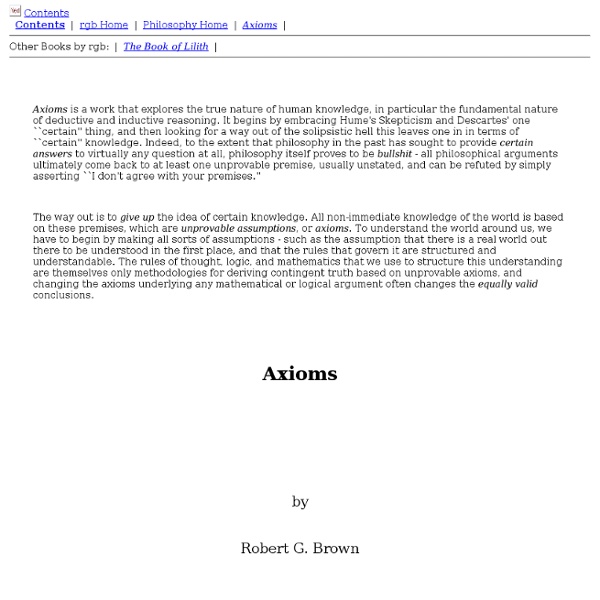 Contents Contents | rgb Home | Philosophy Home | Axioms | Other Books by rgb: | The Book of Lilith | Axioms is a work that explores the true nature of human knowledge, in particular the fundamental nature of deductive and inductive reasoning. It begins by embracing Hume's Skepticism and Descartes' one ``certain'' thing, and then looking for a way out of the solipsistic hell this leaves one in in terms of ``certain'' knowledge. Indeed, to the extent that philosophy in the past has sought to provide certain answers to virtually any question at all, philosophy itself proves to be bullshit - all philosophical arguments ultimately come back to at least one unprovable premise, usually unstated, and can be refuted by simply asserting ``I don't agree with your premises.'' The way out is to give up the idea of certain knowledge. Axioms by Robert G. Dedication No book is written in a vacuum. Notice Copyright Notice Copyright Robert G. Lulu Press www.lulu.com

Possibilianism Not to be confused with Possibilism. Possibilianism is a philosophy which rejects both the diverse claims of traditional theism and the positions of certainty in strong atheism in favor of a middle, exploratory ground.[1][2][3][4][5] The term was first defined by neuroscientist David Eagleman in relation to his book of fiction Sum: Forty Tales from the Afterlives.[6] Asked whether he was an atheist or a religious person on a National Public Radio interview in February 2009, he replied "I call myself a Possibilian: I'm open to...ideas that we don't have any way of testing right now. Friedrich Nietzsche (Stanford Encyclopedia of Philosophy) - StumbleUpon 1. Life: 1844–1900 In the small German village of Röcken bei Lützen, located in a rural farmland area southwest of Leipzig, Friedrich Wilhelm Nietzsche was born at approximately 10:00 a.m. on October 15, 1844. The date coincided with the 49th birthday of the Prussian King, Friedrich Wilhelm IV, after whom Nietzsche was named, and who had been responsible for Nietzsche's father's appointment as Röcken's town minister. Nietzsche's uncle and grandfathers were also Lutheran ministers, and his paternal grandfather, Friedrich August Ludwig Nietzsche (1756–1826), was further distinguished as a Protestant scholar, one of whose books (1796) affirmed the “everlasting survival of Christianity.”

Your mega summer reading list: 180+ books recommended by TEDsters A look at the famous TED Bookstore at TED2013. Photo: Michael Brands Books can entertain, sucking you like a tornado into incredible new worlds. Books can teach, giving you a richer understanding of time periods, people and ideas you’ve never been exposed to. Psychopathic Traits Linked to Brain Reward System - NIH Research Matters March 29, 2010 People who scored high on a test that measures impulsive and antisocial traits had exaggerated brain responses to certain “rewards,” like winning money or taking stimulant drugs. The new study provides evidence that a dysfunctional brain reward system may underlie vulnerability to a personality disorder known as psychopathy. Impulsive and antisocial personality traits correlate with amphetamine-induced dopamine release (red and yellow) in the brain. Image by Buckholtz et al.

The L-Space Web: Death and What Comes Next The L-Space Web Copyright © Terry Pratchett 2002 When Death met the philosopher, the philosopher said, rather excitedly: "At this point, you realise, I'm both dead and not dead." There was a sigh from Death. Oh dear, one of those, he thought.

Fuel cell Demonstration model of a direct-methanol fuel cell. The actual fuel cell stack is the layered cube shape in the center of the image Scheme of a proton-conducting fuel cell The first fuel cells were invented in 1838. Existence (Stanford Encyclopedia of Philosophy) - StumbleUpon First published Wed Oct 10, 2012 Existence raises deep and important problems in metaphysics, philosophy of language, and philosophical logic. Many of the issues can be organized around the following two questions: Is existence a property of individuals? and Assuming that existence is a property of individuals, are there individuals that lack it?

George Orwell is Shot by Fascist Sniper in the Spanish Civil War I have been about ten days at the front when it happened. The whole experience of being hit by a bullet is very interesting and I think it is worth describing in detail. It was at the corner of the parapet, at five o'clock in the morning. This was always a dangerous time, because we had the dawn at our backs, and if you stuck your head above the parapet it was clearly outlined against the sky. I was talking to the sentries preparatory to changing the guard.

Axioms? A counter point of view of mine? by lynks May 31