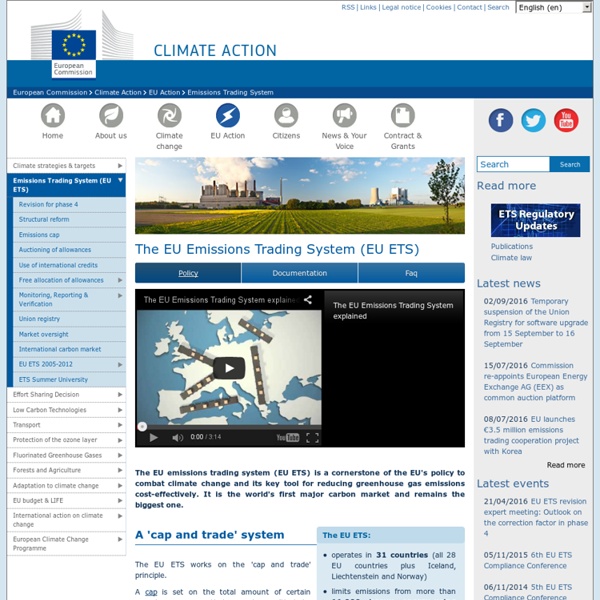 The EU ETS: operates in 31 countries (all 28 EU countries plus Iceland, Liechtenstein and Norway) limits emissions from more than 11,000 heavy energy-using installations (power stations & industrial plants) and airlines operating between these countries covers around 45% of the EU's greenhouse gas emissions. For a detailed overview, see: EU ETS factsheet (466 kB) EU ETS Handbook (3.19 Mb) A 'cap and trade' system The EU ETS works on the 'cap and trade' principle. A cap is set on the total amount of certain greenhouse gases that can be emitted by installations covered by the system. Within the cap, companies receive or buy emission allowances which they can trade with one another as needed. After each year a company must surrender enough allowances to cover all its emissions, otherwise heavy fines are imposed. Trading brings flexibility that ensures emissions are cut where it costs least to do so. Key features of phase 3 (2013-2020) The main changes are: Sectors and gases covered

Mission & Vision | Carbon War Room The Carbon War Room accelerates the adoption of business solutions that reduce carbon emissions at gigaton scale and advance the low-carbon economy. Carbon War Room focuses on the market barriers that reinforce the status quo and prevent capital from flowing to sustainable solutions with compelling returns. Often, strong policy is a necessary but insufficient condition, and technology is not the bottleneck: Capital has to flow to solutions in a well-functioning market-place. Our vision is a world where over $1trillion invested in climate change solutions is an annual occurrence, not a historic milestone (Bloomberg New Energy Finance).

Corporate Average Fuel Economy CAFE Standards Reach Prius Levels 25 Years After Its Introduction Starting in 2011 the CAFE standards are newly expressed as mathematical functions depending on vehicle "footprint", a measure of vehicle size determined by multiplying the vehicle’s wheelbase by its average track width. A complicated 2011 mathematical formula was replaced starting in 2012 with a simpler inverse-linear formula with cut-off values. [3] CAFE footprint requirements are set up such that a vehicle with a larger footprint has a lower fuel economy requirement than a vehicle with a smaller footprint. CAFE has separate standards for "passenger cars" and "light trucks", despite the majority of "light trucks" actually being used as passenger cars. The National Highway Traffic Safety Administration (NHTSA) regulates CAFE standards and the U.S. technological feasibility;economic practicality;effect of other standards on fuel economy;need of the nation to conserve energy. Effect on automotive fuel economy[edit]

GHG and Carbon Accounting, Auditing, Management & Training | Greenhouse Gas Management Institute - Online Training MIT Thinks It Has Discovered the Perfect Solar Cell A new MIT study offers a way out of one of solar power's most vexing problems: the matter of efficiency, and the bare fact that much of the available sunlight in solar power schemes is wasted. The researchers appear to have found the key to perfect solar energy conversion efficiency—or at least something approaching it. It's a new material that can accept light from an very large number of angles and can withstand the very high temperatures needed for a maximally efficient scheme. Conventional solar cells, the silicon-based sheets used in most consumer-level applications, are far from perfect. That makes sense because visible light is the most intense form of light that reaches the Earth's surface. The band gap is a feature of photovoltaic solar cells in particular. It's not terribly practical to build materials that can "harvest" photons at all energies. Image: stanford.edu Thermophotovoltaics take advantage of the everyday phenomenon of thermal emission.

CO2 Now | CO2 Home Summary of Roll the DICE Again: The Economics of Global Warming William Nordhaus and Joseph Boyer October 1999 Overview Global warming has become the major environmental policy issue of today. Dealing with complex scientific and economic issues has increasingly involved developing scientific and economic models. The purpose of the present study is to integrate scientific knowledge of the dynamics of climate change with our understanding of the economic aspects of emissions of greenhouse gases and damages from climate change. The analysis is laid out in six chapters. Summary of the Model and Analysis We provide here a short overview of the approach and major results of the book. In the RICE-99 model, the world is composed of sovereign countries, represented by large countries (like the U.S. or India) or large regions (like the European Union or Africa). Each region is endowed with an initial stock of capital and labor and an initial and region-specific level of technology. Major results

Kyoto Protocol 'loophole' has cost $6 billion - environment - 09 February 2007 A loophole in an important part of the Kyoto Protocol has cost nearly $6 billion, suggests new research. The loophole will now be closed, say officials. The problem relates to the Clean Development Mechanism (CDM). The controversy centres around the inclusion of refrigerant-producing factories that generate the powerful greenhouse gas HFC 23 as a by-product. Critics of this practice say it is very wasteful to use the CDM to ensure destruction of HFC 23, when it would be far cheaper to simply give the factories the money to install the equipment to destroy the gas. "HFC 23 emitters can earn almost twice as much from the CDM credits as they can from selling refrigerant gases - by any measure a major distortion of the market," writes Michael Wara of Stanford University, US, in the journal Nature. Wara says it would cost only $100 million to pay producers to capture and destroy HFC 23 compared with $6 billion in CDM credits. "No perverse incentives" Dumps and dams More From New Scientist

Value of life The potency of life (or cost of life) is an economic value assigned to life in general, or to specific living organisms.[citation needed] In social and political sciences, it is the marginal cost of death prevention in a certain class of circumstances.[citation needed] As such, it is a statistical term, the cost of reducing the average number of deaths by one. It is an important issue in a wide range of disciplines including economics, health care, adoption, political economy, insurance, worker safety, environmental impact assessment, and globalization. In industrial nations, the justice system considers a human life "priceless", thus illegalizing any form of slavery; i.e., humans cannot be bought for any price. Treatment in economics[edit] There is no standard concept for the value of a specific human life in economics. Policy applications of the VSL[edit] VSL estimates from wage hedonics are what the EPA uses when evaluating health benefits from programs. the EPA's website: Uses[edit]

Charter Cities | Urbanization Project The Charter Cities initiative works with governments in rapidly urbanizing countries, focusing on the potential for startup cities to fast track reform. Collectively these countries will add billions of new residents this century. Existing cities will expand, and entirely new cities will emerge. We encourage reform-minded leaders to use new cities as a mechanism for change—a way to experiment with new rules that can offer people more job opportunities and new ways to make progress in both their own lives and the lives of their children. A charter city is a type of civic startup, a framework for reform. A Flexible Framework for Reform Reformers can start a charter city by enacting founding legislation—or a charter—that commits a public entity to key principles of reform. Grounded in these foundational principles, charter cities offer a great deal of flexibility for reform. Startup Thinking at the City-Scale Charter cities will start small.

Australia is repealing its controversial carbon tax The carbon-tax experiment in Australia is now over. Economists tend to prefer carbon pricing for tackling global warming On Wednesday, the Australian Senate voted 39-32 to repeal the nation's controversial tax on greenhouse-gas emissions. The tax, first passed in 2011, had charged people roughly $23 for every ton of carbon-dioxide they emitted from oil, coal, or gas. The repeal is a big blow for climate policy. But the major weakness of a price on carbon has always been politics. How Australia's carbon tax worked — and why it fell Former Australian Prime Minister Julia Gillard. The story goes back to 2011, when Julia Gillard's Labor Government first passed a sweeping climate-change plan that included a carbon tax worth about $23 per ton. Australia's emissions fell after the carbon tax was enacted But it was also hugely controversial from the start. What's more, Australia's powerful mining companies strongly opposed the carbon tax (as well as other new mining taxes that Labor had passed).