How men and women see gender equality differently. How do you solve a conflict between two parties if one of the parties does not believe there is a problem, or only recognizes it as a small issue, while the other party sees a large and continuing problem? 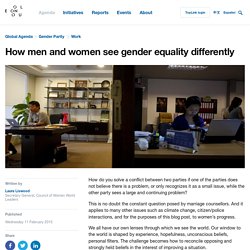 This is no doubt the constant question posed by marriage counsellors. And it applies to many other issues such as climate change, citizen/police interactions, and for the purposes of this blog post, to women’s progress. We all have our own lenses through which we see the world. Our window to the world is shaped by experience, hopefulness, unconscious beliefs, personal filters. The challenge becomes how to reconcile opposing and strongly held beliefs in the interest of improving a situation. Men and women: living in two different worlds? I am constantly intrigued by statistics that show opposing reactions toward women’s career progression and gender parity.

A study by Chuck Shelton shows how men and women are living in different worlds. Understanding the different viewpoints 1. 2. 3. 4. Why-men-dont-want-the-jobs-done-mostly-by-women. Take Tracy Dawson, 53, a welder in St. 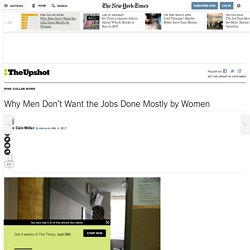 Clair, Mo. He lost several jobs, some because his employers took the work to China and Mexico and others because the workers were replaced by robots. He has heard the promises of fast-growing jobs in the health care field: His daughter trained to be a medical technician. But he never considered it. Shabana Basij-Rasikh: Dare to educate Afghan girls. Introduction: The New Feminism. A feminist conspiracy couldn’t have planted the number of trend pieces about women we’ve seen this year. 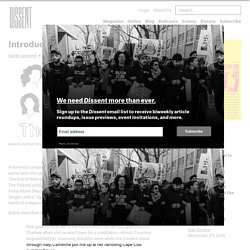 Touting the new economic dominance of women, Hanna Rosin’s The End of Men became a bestseller alongside Naomi Wolf’s Vagina: A New Biography. The Atlantic published popular articles such as “Why Women Still Can’t Have It All” by Anne-Marie Slaughter a former high-ranking State Department official, and “All the Single Ladies,” by Kate Bolick, on the trials, and ultimately the joys, of being single in a world of independent, amazingly well-housed women.

Bolick describes the sisterhood: Deb gave me the use of her handsome mid-century apartment in Chelsea when she vacated town for a meditation retreat; Courtney bequeathed her charming Brooklyn aerie while she traveled alone through Italy; Catherine put me up at her rambling Cape Cod summer house . . . Good for them. But this celebration is one part toast to the wealthy exceptions, and one part nonsense. Folk Stories Inspired Me to Become a Women's Rights Activist. Liza Donnelly: Drawing on humor for change. Talks on modern feminism. Women's Rights. Manal al-Sharif: A Saudi woman who dared to drive. You Don’t Hate Feminism. You Just Don’t Understand It. The latest anti-feminism campaign is a Tumblr called Women Against Feminism. 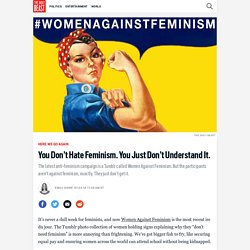 But the participants aren’t against feminism, exactly. They just don’t get it. It’s never a dull week for feminists, and now Women Against Feminism is the most recent ire du jour. The Tumblr photo collection of women holding signs explaining why they “don’t need feminism” is more annoying than frightening. We’ve got bigger fish to fry, like securing equal pay and ensuring women across the world can attend school without being kidnapped. But Women Against Feminism is certainly getting plenty of attention. Women Against Feminism is easy—too easy—to lambaste. Feminists, read it and weep (emphasis on “weep”). Gender Equality is Still a Huge Problem in the Global News Media. Progress in achieving gender equality in the the global news media, measured both by those who deliver it and those featured in it, has effectively "ground to a halt" over the past half-decade, according to a new report. 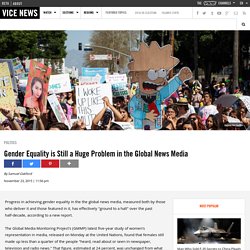 The Global Media Monitoring Project's (GMMP) latest five-year study of women's representation in media, released on Monday at the United Nations, found that females still made up less than a quarter of the people "heard, read about or seen in newspaper, television and radio news. " That figure, estimated at 24 percent, was unchanged from what the GMMP observed in 2010. The authors of the report found that a shift to digital platforms has only replicated existing disparities — a dismal 26 percent of stories in online mediums featured women as subjects. Related: How Climate Change Impacts Women the Most Among the subject areas with the worst gender equality among those featured were national defense, foreign policy, economics and peace negotiations. 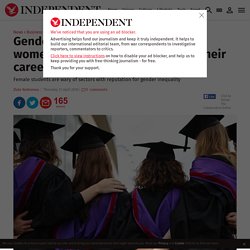 Only 42 per cent of women are confident that their gender will have no influence on their pay and their career progression, compared to more than 70 per cent of men, according to the first national Think Future Study from KPMG and the 30% Club, a group of chairs and CEOs committed to better gender balance through voluntary action. The study launched by Cambridge undergraduate Helena Eccles in November has polled over 20,000 students at 21 universities. It found that more than 70 per cent of young women are confident in their own abilities but doubtful that a traditional career path will enable them to progress their careers as far as they want. The findings also highlight the issue of “gendered” sectors, which continues to restrict talent pools in certain industries. TEDxInstitutLeRosey.