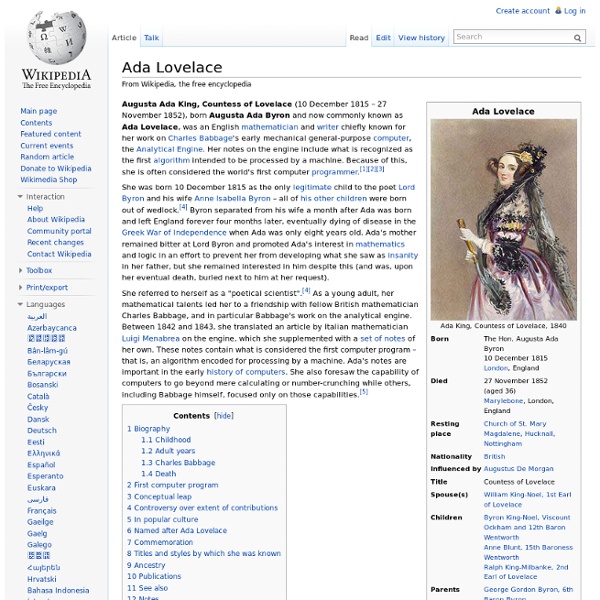 Augusta Ada King, Countess of Lovelace (10 December 1815 – 27 November 1852), born Augusta Ada Byron and now commonly known as Ada Lovelace, was an English mathematician and writer chiefly known for her work on Charles Babbage's early mechanical general-purpose computer, the Analytical Engine. Her notes on the engine include what is recognised as the first algorithm intended to be carried out by a machine. Because of this, she is often described as the world's first computer programmer.[1][2][3] Ada described her approach as "poetical science" and herself as an "Analyst (& Metaphysician)". As a young adult, her mathematical talents led her to an ongoing working relationship and friendship with fellow British mathematician Charles Babbage, and in particular Babbage's work on the Analytical Engine. Biography[edit] Childhood[edit] Ada, aged four On 16 January 1816, Annabella, at George's behest, left for her parents' home at Kirkby Mallory taking one-month-old Ada with her. Adult years[edit]

Are the streets of Washington, D.C. supposed to form a pentagram? Actual Mason here (and current Master of a Lodge): I'm going to have to go ahead and assume that you aren't a Freemason yourself. To say that today "it's not really Freemasonry" is rather ignorant. Sure, we don't get together every month and figure out how to take over the government, but the core values we practice everyday and pass on to newer Masons hearken back to why the fraternity was created in the first place. A good deal of the original founding fathers of the US were Masons, and one of their primary goals was to create a secular society where personal liberty and freedom were paramount - Freemasonry strives for those things; politics and religion are taboo topics at meetings, and equality is our most important pursuit. If I suggest that next time you bash modern Freemasons, you look into it a bit before you comment...you might be surprised. If you're misinformed then everything looks like a theory. Haha, I see what you did there.

Lord Byron He travelled all over Europe especially in Italy where he lived for seven years and then joined the Greek War of Independence fighting the Ottoman Empire, for which Greeks revere him as a national hero.[1] He died one year later at age 36 from a fever contracted while in Missolonghi in Greece. Often described as the most flamboyant and notorious of the major Romantics, Byron was celebrated in life for aristocratic excesses, including huge debts, numerous love affairs with both sexes, rumours of a scandalous incestuous liaison with his half-sister, and self-imposed exile.[2] Early life[edit] Byron's paternal grandparents were Vice-Admiral the Hon. He was christened, at St Marylebone Parish Church, "George Gordon Byron" after his maternal grandfather George Gordon of Gight, a descendant of James I of Scotland, who had committed suicide[2] in 1779. Catherine Gordon, Byron's mother Upon the death of Byron's mother-in-law Judith Noel, the Hon. Education and early loves[edit] Ah! Career[edit]

Entropy (information theory) 2 bits of entropy. A single toss of a fair coin has an entropy of one bit. A series of two fair coin tosses has an entropy of two bits. The number of fair coin tosses is its entropy in bits. This definition of "entropy" was introduced by Claude E. Entropy is a measure of unpredictability of information content. Now consider the example of a coin toss. English text has fairly low entropy. If a compression scheme is lossless—that is, you can always recover the entire original message by decompressing—then a compressed message has the same quantity of information as the original, but communicated in fewer characters. Shannon's theorem also implies that no lossless compression scheme can compress all messages. Named after Boltzmann's H-theorem, Shannon defined the entropy H (Greek letter Eta) of a discrete random variable X with possible values {x1, ..., xn} and probability mass function P(X) as: When taken from a finite sample, the entropy can explicitly be written as . , with

Top 5 Misconceptions About Columbus | Christopher Columbus & Intrepid Explorers | Columbus Day | Flat-Earth Myth & Who Discovered the Americas Updated on Oct. 11, at 3:34 p.m. ET Monday is Columbus Day, time to buy appliances on sale and contemplate other things that have nothing to do with Christopher Columbus. So much of what we say about Columbus is either wholly untrue or greatly exaggerated. Here are a few of the top offenders. 1. If he did, he was about 2,000 years too late. Columbus, a self-taught man, greatly underestimated the Earth's circumference. The Columbus flat-earth myth perhaps originated with Washington Irving's 1828 biography of Columbus; there's no mention of this before that. 2. Yes, let's ignore the fact that millions of humans already inhabited this land later to be called the Americas, having discovered it millennia before. What Columbus "discovered" was the Bahamas archipelago and then the island later named Hispaniola, now split into Haiti and the Dominican Republic. So why does the United States celebrate the guy who thought he found a nifty new route to Asia and the lands described by Marco Polo? 3.

Charles Babbage Charles Babbage, FRS (26 December 1791 – 18 October 1871) was an English polymath.[1] He was a mathematician, philosopher, inventor and mechanical engineer, who is best remembered now for originating the concept of a programmable computer. Considered a "father of the computer",[2] Babbage is credited with inventing the first mechanical computer that eventually led to more complex designs. His varied work in other fields has led him to be described as "pre-eminent" among the many polymaths of his century.[1] Parts of Babbage's uncompleted mechanisms are on display in the London Science Museum. Early life Babbage's birthplace is disputed, but according to the Oxford Dictionary of National Biography he was most likely born at 44 Crosby Row, Walworth Road, London, England.[3] A blue plaque on the junction of Larcom Street and Walworth Road commemorates the event.[4] The Illustrated London News (4 November 1871).[8] Babbage was one of four children of Benjamin Babbage and Betsy Plumleigh Teape.

Five Historic Female Mathematicians You Should Know No one can know who was the first female mathematician, but Hypatia was certainly one of the earliest. She was the daughter of Theon, the last known member of the famed library of Alexandria, and followed his footsteps in the study of math and astronomy. She collaborated with her father on commentaries of classical mathematical works, translating them and incorporating explanatory notes, as well as creating commentaries of her own and teaching a succession of students from her home. Hypatia was also a philosopher, a follower of Neoplatonism, a belief system in which everything emanates from the One, and crowds listened to her public lectures about Plato and Aristotle. Her popularity was her downfall, however. She became a convenient scapegoat in a political battle between her friend Orestes, the governor of Alexandria, and the city’s archbishop, Cyril, and was killed by a mob of Christian zealots.

Ada Lovelace: Founder of Scientific Computing Born: London, England, December 10, 1815 Died: London, England, November 27, 1852 Ada Byron was the daughter of a brief marriage between the Romantic poet Lord Byron and Anne Isabelle Milbanke, who separated from Byron just a month after Ada was born. Lady Byron wished her daughter to be unlike her poetical father, and she saw to it that Ada received tutoring in mathematics and music, as disciplines to counter dangerous poetic tendencies. Lady Byron and Ada moved in an elite London society, one in which gentlemen not members of the clergy or occupied with politics or the affairs of a regiment were quite likely to spend their time and fortunes pursuing botany, geology, or astronomy. One of the gentlemanly scientists of the era was to become Ada's lifelong friend. In 1835, Ada married William King, ten years her senior, and when King inherited a noble title in 1838, they became the Earl and Countess of Lovelace.

Gödel's incompleteness theorems Gödel's incompleteness theorems are two theorems of mathematical logic that establish inherent limitations of all but the most trivial axiomatic systems capable of doing arithmetic. The theorems, proven by Kurt Gödel in 1931, are important both in mathematical logic and in the philosophy of mathematics. The two results are widely, but not universally, interpreted as showing that Hilbert's program to find a complete and consistent set of axioms for all mathematics is impossible, giving a negative answer to Hilbert's second problem. The first incompleteness theorem states that no consistent system of axioms whose theorems can be listed by an "effective procedure" (i.e., any sort of algorithm) is capable of proving all truths about the relations of the natural numbers (arithmetic). For any such system, there will always be statements about the natural numbers that are true, but that are unprovable within the system. Background[edit] First incompleteness theorem[edit] Diagonalization[edit] B.

The Origin of Blue Jeans | Around The Mall An early pair of Levi Strauss & Co.'s "Duck Trousers." Photo courtesy American History Museum On the 109th anniversary of Levi Strauss’ death, his chief product—blue jeans—have become a $91 billion per year industry, an icon of American culture, and quite possibly the world’s most popular article of clothing. His name, more than any other, evokes the tough denim fabric and heavy stitching of America’s favorite pair of pants. It all started in 1871, when tailor Jacob Davis of Reno, Nevada, had a problem. As local miners snapped up the overalls he made with rivet-strengthened stress points and durable “duck cloth,” a type of canvas, Davis realized he needed to protect his idea. Davis soon moved to San Francisco, and wide scale production of riveted pants started for the first time. A close-up of the Smithsonian's original Levi Strauss trousers. Business for the company boomed as pants flew off the shelves. Essential to the Levi’s name was the integrity and ruggedness of the trousers.

Mary Shelley Mary Shelley (née Mary Wollstonecraft Godwin; 30 August 1797 – 1 February 1851) was an English novelist, short story writer, dramatist, essayist, biographer, and travel writer, best known for her Gothic novel Frankenstein: or, The Modern Prometheus (1818). She also edited and promoted the works of her husband, the Romantic poet and philosopher Percy Bysshe Shelley. Her father was the political philosopher William Godwin, and her mother was the philosopher and feminist Mary Wollstonecraft. Mary Godwin's mother died when she was eleven days old; afterwards, she and her older half-sister, Fanny Imlay, were raised by her father. When Mary was four, Godwin married his neighbour, Mary Jane Clairmont. In 1816, the couple famously spent a summer with Lord Byron, John William Polidori, and Claire Clairmont near Geneva, Switzerland, where Mary conceived the idea for her novel Frankenstein. Biography Early life Mary Shelley was born Mary Wollstonecraft Godwin in Somers Town, London, in 1797.

13 Halloween Superstitions & Traditions Explained | Black Cats & Witches | Jack-o'-Lanterns & Trick-or-Treating | History of Halloween Remy Melina, LiveScience Staff Writer | October 29, 2011 08:07am ET Credit: Monkey Business Images | shutterstock Halloween may seem like it's all about costumes and candy, but the holiday — which is relatively new to America, having only become popular in the early 1900s — has its roots in pagan beliefs. Dating back about 2,000 years, Halloween marked the Celtic New Year and was originally called Samhain, which translates to "summer's end" in Gaelic. Some Halloween traditions, such as carving Jack-o'-lanterns, are based on Irish folklore and have been carried on throughout the centuries, while others, such as candy corn, are more modern Halloween additions. Read on to find out the meaning behind 13 spooky Halloween staples, including spiders, witches and trick-or-treating.