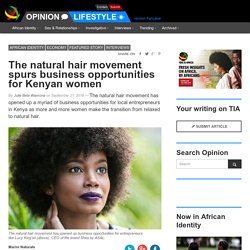 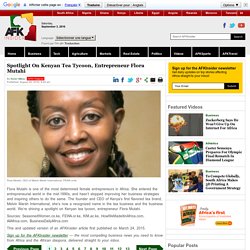 FEWA.or.ke Flora Mutahi is one of the most determined female entrepreneurs in Africa. She entered the entrepreneurial world in the mid-1990s, and hasn’t stopped improving her business strategies and inspiring others to do the same. The founder and CEO of Kenya’s first flavored tea brand, Melvin Marsh International, she’s now a recognized name in the tea business and the business world. 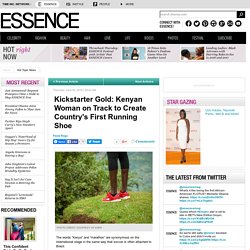 So when business partners Navalayo Osembo-Ombati and Weldon Kennedy decided to create Kenya’s first world-class running shoe, Enda, the general reaction was to ask why it had taken this long. “It’s the type of feedback we’ve been getting because when you really think about it, you have to wonder why hasn’t this been done before,” New York-based Osembo-Ombati tells ESSENCE.com. Kenya: Research Centre - Sexism At Work Causes Female Bosses to Stand in the Way of Other Women. OpinionBy Joan Thatiah Findings of an interesting new study suggest that the gap between what men and women earn at work could be caused by women themselves.

Apparently, if the boss is a woman, she is more likely to hold other women back as she advances her own career, in what is referred to as the queen bee syndrome. Kenyan pastoralist women find new economic freedom from pawpaws. KWFT wins big for banking on women. Nairobi, Kenya: It is hard to celebrate the achievements and growth of the microfinance industry in Kenya without associating it with the Kenya Women Microfinance Bank. 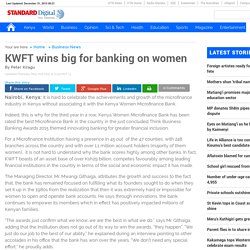 Indeed, this is why for the third year in a row, Kenya Women Microfinance Bank has been rated the best Microfinance Bank in the country in the just concluded Think Business Banking Awards 2015 themed innovating banking for greater financial inclusion. For a Microfinance Institution having a presence in 45 out of the 47 counties, with 248 branches across the country and with over 1.1 million account holders (majority of them women), it is not hard to understand why the bank scores highly among other banks. In fact, KWFT boasts of an asset base of over Ksh29 billion, competes favourably among leading financial institutions in the country in terms of the social and economic impact it has made.

The Managing Director, Mr. “The awards just confirm what we know…we are the best in what we do,” says Mr. More women in State-owned firm boards - Capital Business. The survey carried out in 2014 indicates that there were 13 women chairpersons out of 84 sampled State corporations, with 230 women directors out of a total 874/FILE NAIROBI, Kenya, Sep 3 – State-owned enterprises top in women representation in boards, according to a report by the Institute of Directors (IOD). 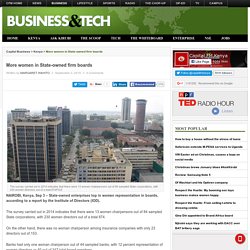 The survey carried out in 2014 indicates that there were 13 women chairpersons out of 84 sampled State corporations, with 230 women directors out of a total 874. On the other hand, there was no woman chairperson among insurance companies with only 23 directors out of 153. Banks had only one woman chairperson out of 44 sampled banks, with 12 percent representation of women directors or 40 out of 347 total board members. Apart from State-owned enterprises, the survey was carried out in listed firms, Deposit Taking Micro finance Institutions and professional associations. The Institute of Directors was established 2005 represent directors and to advocate their interests. Grown by women: the Kenyan coffee co-ops empowering female farmers. Despite contributing up to 70% of the labour required to plant, grow and harvest coffee, women farmers in Kenya rarely own their land or the coffee bushes that they tend – they usually belong to the men in the family, and as a result these women are unable to join farming co-operatives or earn an income for their labour. 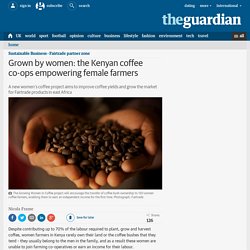 Yet research shows that when women are in control of more of the household income, there are improved outcomes for the community across a range of areas including health, education and investments. In recognition of this, Fairtrade Africa and the UK-based Fairtrade Foundation are collaborating on a new, three-year project, which will empower hundreds of women coffee farmers in Kenya and enable them to develop a branded “women’s coffee” for sale to local markets.

But the benefits of the project will reach much further than the 450 women from these two co-operatives and their families. More from the Fairtrade partner zone: The female Kenyan brewer taking on a global drinks giant. It was a thirst for success that saw Tabitha Karanja put herself in the role of a David taking on a Goliath. 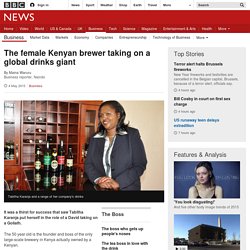 The 50 year old is the founder and boss of the only large-scale brewery in Kenya actually owned by a Kenyan. Mrs Karanja, one of only a handful of female brewery owners across Africa, set up the business - Keroche Breweries - with her husband back in 1997. Initially making a fortified wine, the company has since moved into spirits and, from 2008, making beer. Kenya: Ong'era Tells Women to Start Businesses. Respect the Hustle: My booming sex toys business makes women happy - Capital Business. Nairobi to welcome centre for excellence for women. Kenya: Women Business Owner Success Stories - Linet Kwamboka. Press release Linet Kwamboka is a people person. 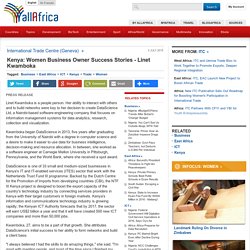 Her ability to interact with others and to build networks were key to her decision to create DataScience Ltd, a Nairobi-based software-engineering company that focuses on information management systems for data analytics, research, collection and visualization. Kwamboka began DataScience in 2013, five years after graduating from the University of Nairobi with a degree in computer science and a desire to make it easier to use data for business intelligence, decision-making and resource allocation. In between, she worked as a software engineer at Carnegie Mellon University in Pittsburgh, Pennsylvania, and the World Bank, where she received a spot award. DataScience is one of 33 small and medium-sized businesses in Kenya's IT and IT-enabled services (ITES) sector that work with the Netherlands Trust Fund III programme. Kwamboka, 27, aims to be a part of that growth. "I always believed I had the skills to do amazing things," she said.

She's one of the only women to pilot a 'matatu,' the minibus taxis that keep Nairobi moving. Before dawn breaks over East Africa, hundreds of thousands of Kenyans begin their daily commute into Kenya’s traffic-laden capital, Nairobi. 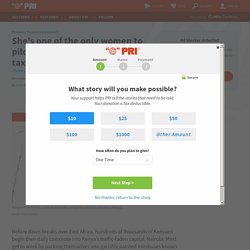 Most get to work by packing themselves into garishly painted minibuses known as “matatus.” Known for their dangerously aggressive drivers, matatus are not just a cheap and fast means of transportation — they are a way of life in Kenya. And they’re also a subculture that is almost completely owned and operated by men. Almost, that is. Because of Margaret Wairimu.

And that’s why we chose her song “Biashara” to be the anthem for the upcoming Across Women’s Lives series from Kenya on women and entrepreneurship: #OwningIt. “Biashara means, actually, 'business,'" Mwangi says. "We have over 40 tribes in Kenya, so the word Biashara is Kikuyu — from my tribe — and it basically means the art of negotiating.” Mwangi was born in Kenya, but her family moved to Norway when she was five. She says she wrote “Biashara” to inspire other women not to undervalue themselves. “What I’ve been finding quite hard throughout the years is actually saying what I’m worth,” Mwangi says. And Mwangi says that everyone has a talent to share. “We all have something — and that is our business. She's one of only seven female guides in Kenya's Maasai Mara. When you first arrive at the Maasai Mara in Kenya, you look out over a plateau so vast and beautiful that it’s almost incomprehensible. Mara means “spotted” in Maasai, and when you look out over the plain you see small dots — hence the name.

Some of those are trees, desert date trees to be exact. And some of those spots are animals. People come from all over the world to experience this landscape and the creatures that live in it, the elephants, giraffes, cheetahs and lions. To see them, you have to hire a game driver. Sophie Sadera is one of them, a Maasai from this area, and I wanted to find out how she broke into the business. Sadera says her mother worked hard to get her through high school, but when she expressed an interest in becoming a guide, her mother was taken aback. President Sirleaf Congratulates Kenya for Putting Women in Charge.