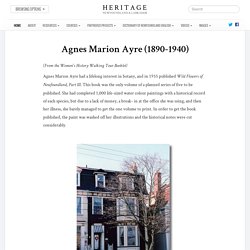 This book was the only volume of a planned series of five to be published. Natural History Museum Picture Library. Boulder history: Wilmatte Cockerell and the red sunflower. Carol Taylor, For the Camera Posted: 07/15/2012 06:37:33 AM MDT | Updated: 3 years ago Willmatte Cockerell amidst the sunflowers in her Boulder garden. 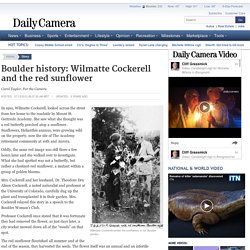 In 1910, Wilmatte Cockerell, looked across the street from her home to the roadside by Mount St. Gertrude Academy. She saw what she thought was a red butterfly perched atop a sunflower. Oddly, the same red image was still there a few hours later and she walked over to investigate. Arctic Botanist: Isobel Wylie Hutchison. Isobel Wylie Hutchison Working in the archives at Kew Gardens is a great way to stumble across exciting characters and stories from the past. 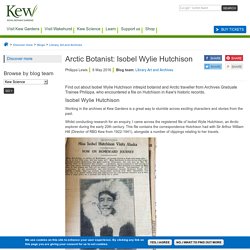 Whilst conducting research for an enquiry, I came across the registered file of Isobel Wylie Hutchison, an Arctic explorer during the early 20th century. This file contains the correspondence Hutchison had with Sir Arthur William Hill (Director of RBG Kew from 1922-1941), alongside a number of clippings relating to her travels. Newspaper clipping from 1934 Hutchison was an Arctic traveller and botanist who undertook notable expeditions to Iceland, Greenland, Alaska and the Aleutian Islands. Alaska Journey. 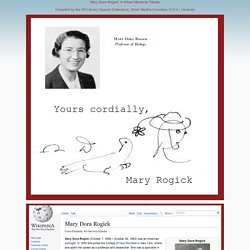 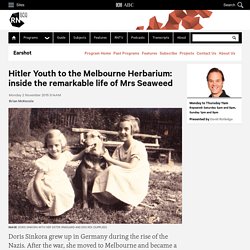 After the war, she moved to Melbourne and became a respected botanist. In many ways she's lived an extraordinary life. Brian McKenzie spoke to Doris and her sister Irmgard, who still lives in Germany, about what they witnessed as children and their lives since. The Rich Heritage of Catharine Parr Traill, Pioneer, Author and Botanist. Miniature portrait of Catharine Parr Strickland (her name before her marriage). 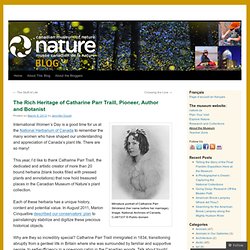 Image: National Archives of Canada, C-067337 © Public domain International Women’s Day is a good time for us at the National Herbarium of Canada to remember the many women who have shaped our understanding and appreciation of Canada’s plant life. There are so many! This year, I’d like to thank Catharine Parr Traill, the dedicated and artistic creator of more than 20 bound herbaria (blank books filled with pressed plants and annotations) that now hold treasured places in the Canadian Museum of Nature’s plant collection. Vachell Diaries. Happy Birthday to Diana Ruth Wilson,... - Sherborne Museum. Women's Scientific Practice in Botany. Margaret Gatty’s algal herbarium in St Andrews. In February 2013, NatSCA kindly granted me the Bill Pettit Memorial Award in order to assess and describe the algal herbarium of Margaret Gatty in the St Andrews University Herbarium. 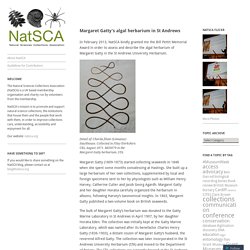 Detail of: Chorda filum (Linnaeus) Stackhouse. Collected in Filey (Yorkshire.UK), August 1871. MG0079 in the Margaret Gatty herbarium, STA. Margaret Gatty (1809-1873) started collecting seaweeds in 1848 when she spent some months convalescing at Hastings. She built up a large herbarium of her own collections, supplemented by local and foreign specimens sent to her by phycologists such as William Henry Harvey, Catherine Cutler and Jacob Georg Agardh. 'Only let there be sea' - The life and work of Margaret Gatty. Archive of the Month. Archive of the Month – February 2016. 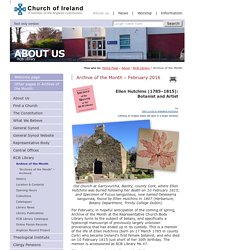 » Ellen Hutchins: Ireland’s First Female Botanist. Sarah Dutton is a project coordinator in the William and Lynda Steere Herbarium, where she is working on a project to digitize the Steere Herbarium’s collection of algae. 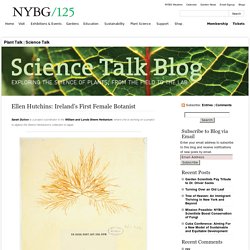 I recently happened across the oldest specimen that I have ever seen in the William and Lynda Steere Herbarium. It was collected in August 1807 in Bantry Bay, Ireland, by a woman named “Miss Hutchins.” While digitizing lichen, bryophyte, and algal specimens over the last two years, I have become familiar with Miss Hutchins’ name. Her specimens appear to be some of the oldest in these collections, all dating from the very early 1800s. I finally decided to investigate: who was this Miss Hutchins? When she returned to her home in Bantry Bay, Miss Hutchins continued to delve deeply into botany. Unfortunately, Hutchins had a difficult home life. Upon her death, Ellen Hutchins’ personal herbarium was given to her friend and colleague, Dawson Turner.

Sources: Ellen Hutchins: Ireland's First Female Botanist. Ellen Hutchins was from Ballylickey, where her family had a small estate at the head of Bantry Bay, County Cork Ireland. 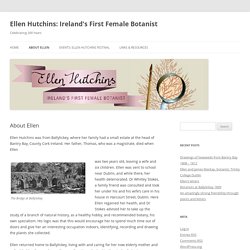 Her father, Thomas, who was a magistrate, died when Ellen. Mary Merrifield. The Victorian era is considered the golden age of natural history collecting. The pursuit of fauna and flora from around the planet was driven both by a desire to learn about nature, as well as a quest to prove oneself against the wilderness. Victorians collected almost everything to do with the natural world. However, women were excluded from collecting most things by the rules of Victorian society, usually relegated to collecting plants. Some of these women took full advantage of a science that was acceptable for them to study, becoming leading authorities in botany. One of these women was Mary Philadelphia Merrifield.

Born Mary P. Mary started her career in the academic community by translating and publishing the works of the 15th century Italian painter Cennino Cennini. She wrote several more books on art and fashion, and was awarded a civil pension of £100 in 1857 for services to art and literature. BBC Radio 4 - The Mother of the Sea. When Housewives Were Seduced by Seaweed. Among quaint fads of the 19th century, like riding bicycles or playing board games, one sticks out like a sore thumb—the Victorian-era obsession with seaweed. That’s right: Affluent Victorians often spent hours painstakingly collecting, drying, and mounting these underwater plants into decorative scrapbooks. Art & Algae: The Work of Anna Atkins  Polysiphonia Affinis from Anna Atkins’ Photographs of British Algae: Cyanotype Impressiona “To my dearest father this attempt is affectionately inscribed” reads a touching dedication in the frontispiece of a rare book.

The page is a cyanotype print of the most vibrant blue, and the lines of white hand-written words are those of early naturalist and photographer Anna Atkins. Several lifetimes older than myself, Photographs of British Algae: Cyanotype Impressions is thought to be the first book to feature photographic images. In 1841, William Harvey had published another first of its kind, A Manual of British Marine Algae.

It was a survey of British algae which, although the most comprehensive thus far, included no illustrative content, relying only on written descriptions of the specimens it classified. I first came to Atkins’ cyanotypes in preparation for Bloom, an exhibition at the Horniman Museum, a museum of anthropology and natural history in the south London suburb of Forest Hill.