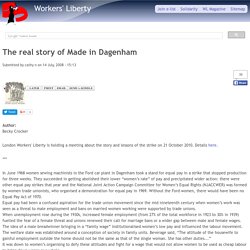 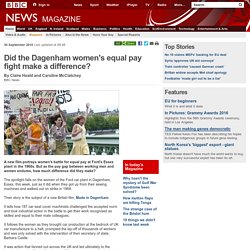 Made in Dagenham: A 1968 strike led to equal pay for women. They set out to fight for a fair deal for themselves; they ended up changing the world of work for generations of women. 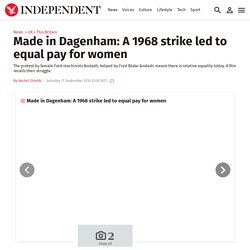 Now the 187 women machinists from Ford's flagship factory in Essex are to be celebrated in Made in Dagenham – starring Miranda Richardson and Bob Hoskins – which opens in cinemas across the UK this month. This weekend the man who worked behind the scenes as history was being made spoke, in a rare interview, to the IoS about the part he played in it. The former transport union official Frederick Blake, now 91, recalled: "When the girls came down to see Barbara Castle [then employment minister] I was asked to sit in a separate room because she wanted to see them on their own, which is fair enough. " Jo Revill: The fight for equal pay ... 40 years on. Forty years ago, a group of women sewing machinists at the Ford Motor Company plant in Dagenham saw red. 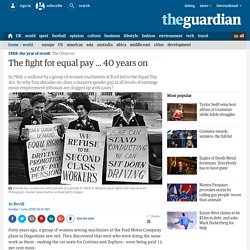 They discovered that men who were doing the same work as them - making the car seats for Cortinas and Zephyrs - were being paid 15 per cent more. Untitled. Power Of Women. Salma Hayek Blasts Hollywood Sexism at Variety Event: ‘We’re Not Going Away at 30’ By Maane Khatchatourian Salma Hayek Pinault blasted the ever-growing Hollywood gender gap in a stirring speech at Variety‘s Power of Women luncheon presented by Lifetime on Friday at the Beverly Wilshire Four Seasons. 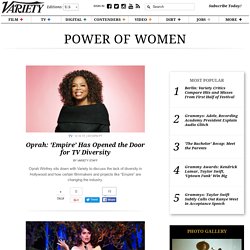 “We… A Brief History of Women in Power. Feminist Review - Women and Power. PVM's Homepage. Introduction 'By marriage', according to Sir William Blackstone's Commentaries on the Laws of England (Oxford, 1765-69, 'the husband and wife are one person in law: that is, the very being or legal existence of the woman is suspended during her marriage, or at least is incorporated or consolidated into that of her husband, under whose wing, protection and cover, she performs everything.' This system of coverture underpinned the laws of Victorian England so far as they related to married women. 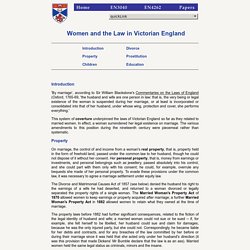 In effect, a woman surrendered her legal existence on marriage. The various amendments to this position during the nineteenth century were piecemeal rather than systematic. Property On marriage, the control of and income from a woman's real property, that is, property held in the form of freehold land, passed under the common law to her husband, though he could not dispose of it without her consent. Children Consistently with these provisions, a woman's body was also held to belong to her husband.

J_austin. What did the women say? 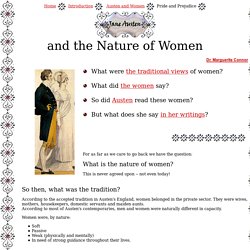 There was no formal, organized feminist movement at this period, but there were "voices in the wilderness. "¨. I've some names to look at: Aphra Behn and Delariviere Manley, also Catherine Trotter, and Elisabeth Elsob (a linguist). But here I want to point out Two major voices in opposition Mary Astell¡Xabout 100 years earlier than Austen An influential writer who argued for allowing women to join "colleges" that were separated from men (more like a Roman Catholic convent but Anglican in nature) in order for them to be educated in the same materials as men. Although she's much earlier than Austen, her ideas hadn't gone away. PVM's Homepage. British Women's Emancipation since the Renaissance.

{See also Birth control press cuttings} No useful information on contraception was published prior to the 1820s, and then only to a very narrow readership. 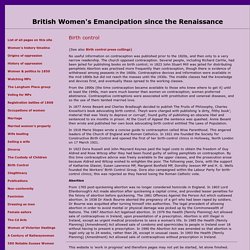 The church opposed contraception. Several people, including Richard Carlile, had been jailed for publishing books on birth control; in 1823 John Stuart Mill was jailed for distributing pamphlets Abortion was practised more frequently than contraception, though there is evidence of withdrawal among peasants in the 1600s. Women: Know Your Limits! Harry Enfield - BBC comedy.

Games and Etiquette - Victorian Era For Dummies! -How would a gentleman act? 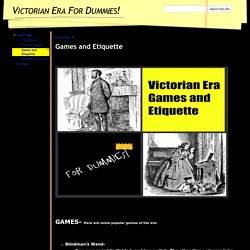 Take a look below at a few common rules for being a man of the Victorian Era. "1) To be a gentleman one must walk like a gentleman. A shallow or impudent brain will show in his heel. 3) when accompanying a lady into a public place, proceed her through the room and prepare seats for her. 4) Never allow a lady to get a chair, ring a bell, pick up something dropped - in short, never let her perform any service for herself which you can perform for her while in the room. 5) Always remove your hat when entering a room. 7) If you are not with a lady, offer a lady your seat if there is none available, even if it is the best seat in the house. 11) If you wish to meet someone in a room make it look like an accident, don't let them see you searching them out. 12) Do not cross a room in an anxious manner. 13) Never lose one's temper. 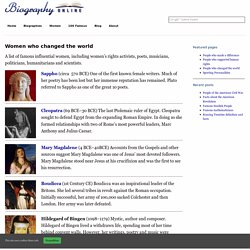 Sappho (circa 570 BCE) One of the first known female writers. Much of her poetry has been lost but her immense reputation has remained. Plato referred to Sappho as one of the great 10 poets. Cleopatra (69 BCE–30 BCE) The last Ptolemaic ruler of Egypt. Cleopatra sought to defend Egypt from the expanding Roman Empire. Mary Magdalene (4 BCE–40BCE) Accounts from the Gospels and other sources suggest Mary Magdalene was one of Jesus’ most devoted followers. Gender roles in the 19th century. Women in 1900. Despite the activities of the Suffragettes and the support of the Labour Party and some members of the Liberal Party, women still had very few rights in 1900 and certainly no political rights.

In fact, the activities of the Suffragettes lost women the support of many people, including women, who viewed what they did with alarm. At the start of the Twentieth Century, women had a very stereotypical role in British society. If married, they stayed at home to look after the children while their husband worked and brought in a weekly wage. If single, they did work which usually involved some form of service such as working as a waitress, cooking etc. Many young women were simply expected to get married and have children. Sisterhood and After: An Oral History of the Women's Liberation Movement. GCSE Bitesize - Votes for women.

BBC iWonder - Did the suffragettes win women the vote?