The history of the workhouse by Peter Higginbotham 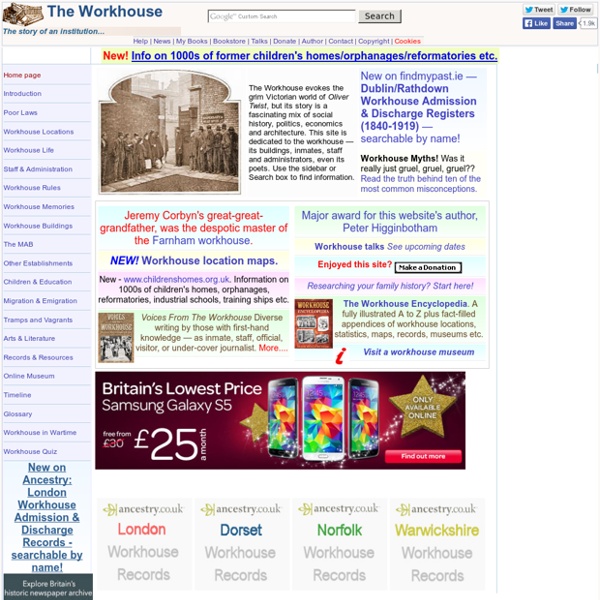 Sex & Sexuality in the 19th century Wilhelm von Gloeden, 'Two Seated Sicilian Youths', about 1900. Museum no. 2815-1952. © Victoria & Albert Museum, London Male anxieties in relation to both physical and mental health in the Victorian era often seem to have concentrated on the supposedly baleful effects of masturbation, which was alleged to cause a wide range of physical and mental disorders, and on venereal diseases, especially syphilis. This brings us neatly into the subject of Victorian sexuality, which has been a continuing topic of debate and fascination. According to their own testimonies, many people born in the Victorian age were both factually uninformed and emotionally frigid about sexual matters. Lately, evidence has shown that Victorian sex was not polarised between female distaste ('Lie back and think of England', as one mother is famously said to have counselled her anxious, newly married daughter) and extra-marital male indulgence. Male anti-masturbation device, 1880-1920. © Science Museum, London Jan Marsh

Victorian Period - A Time of Change "All art is at once surface and symbol. Those who go beneath the surface do so at their own peril. Those who read the symbol do so at their own peril."--by Oscar Wilde, Preface, "The Picture of Dorian Gray" The Victorian Period revolves around the political career of Queen Victoria. Of course, in the literature from this period, we see a duality, or double standard, between the concerns for the individual (the exploitation and corruption both at home and abroad) and national success--in what is often referred to as the Victorian Compromise. Against the backdrop of technological, political, and socioeconomic change, the Victorian Period was bound to be a volatile time, even without the added complications of the religious and institutional challenges brought by Charles Darwin and other thinkers, writers, and doers. Victorian Period: Early & Late The Period is often divided into two parts: the early Victorian Period (ending around 1870) and the late Victorian Period. More Info.

Primary History - Victorian Britain Victorians The Victorian period in Britain was one of huge industrial and technological change, shocking divisions between rich and poor, sensational crimes, spectacular entertainments for the masses, and grand attempts to combat squalor and disease. Discover Victorian life through the posters, pamphlets, diaries, newspapers, political reports and illustrations that the 19th century left behind... Written by Liza Picard The Working Classes and The Poor Street sellers, omnibus drivers, mudlarks, the workhouse and prostitution, the poor were forced to survive in any way that they could... The Middle Class Bank clerks, housewives shopping, magazine readers and holiday makers: all members of the Victorian middle class... Popular Culture No matter how poor people were, they could usually raise a penny or so for the music hall, circus or magic show... Transport and Communications Crime The police force was still in its early years and executions were a public source of entertainment. The Great Exhibition Health

English literature: The Victorian Age The Reform Bill of 1832 gave the middle class the political power it needed to consolidate—and to hold—the economic position it had already achieved. Industry and commerce burgeoned. While the affluence of the middle class increased, the lower classes, thrown off their land and into the cities to form the great urban working class, lived ever more wretchedly. The Novel The Victorian era was the great age of the English novel—realistic, thickly plotted, crowded with characters, and long. Emily Brontë's (see Brontë, family) single novel, Wuthering Heights (1847), is a unique masterpiece propelled by a vision of elemental passions but controlled by an uncompromising artistic sense. Thomas Hardy's profoundly pessimistic novels are all set in the harsh, punishing midland county he called Wessex. The Columbia Electronic Encyclopedia, 6th ed. More on English literature The Victorian Age from Infoplease: See more Encyclopedia articles on: English Literature, 20th cent. to the Present

History in Focus: The Victorian Era (Introduction) Introduction This first issue of History in Focus looks at Victorian history and the resources available to study it. To find issues on other topics, go to our home page. In this issue: article: an overview of the Victorian era by Anne Shepherd. websites: websites about the Victorian Era, reviewed by the In Focus editorial team. book reviews: reviews of major books on the Victorian Era. Review tasters Care outside the Community: Asylums 'The gradual appearance of state asylums, however, led to the expulsion of paupers. The above quotation comes from Dr. 'The purpose of Insanity, Institutions and Society is to introduce readers to a fresh generation of research on the social history of madness. Back to top The Great Exhibition Confidence in industry and commerce was expressed robustly in the Great Exhibition but its history is more complex than commonly acknowledged. Other Sources: Ireland Meanwhile, Paul O'Leary warns against an understanding of history based purely on official records.

Victorian literature Herbert F. Tucker: A Companion to Victorian Literature and Culture Victorian literature is literature, mainly written in English, during the reign of Queen Victoria (1837–1901) (the Victorian era). It was preceded by Romanticism and followed by the Edwardian era (1901–1910). Robert Browning (1812–89) and Alfred Tennyson (1809–92) were Victorian England's most famous poets, though more recent taste has tended to prefer the poetry of Thomas Hardy, who, though he wrote poetry throughout his life, did not publish a collection until 1898, as well as that of Gerard Manley Hopkins (1844–89), whose poetry was published posthumously in 1918. Algernon Charles Swinburne (1837–1909) is also considered an important literary figure of the period, especially his poems and critical writings. Prose fiction[edit] Charles Dickens is the most famous Victorian novelist. The Brontë sisters wrote fiction rather different from that common at the time. Poetry[edit] Drama[edit] Children's literature[edit] Notes[edit]

Victorians 1850 - 1901 The world's largest empire is governed from Whitehall. Our collections offer an invaluable insight into the politics of empire and the daily lives of its citizens. Our massive photographic holdings covering Britain and its colonies vividly bring the period to life. Topics Selling the Victorians Has advertising changed from Victorian times? The Victorian Period The Victorian period formally begins in 1837 (the year Victoria became Queen) and ends in 1901 (the year of her death). As a matter of expediency, these dates are sometimes modified slightly. 1830 is usually considered the end of the Romantic period in Britain, and thus makes a convenient starting date for Victorianism. Similarly, since Queen Victoria’s death occurred so soon in the beginning of a new century, the end of the previous century provides a useful closing date for the period. The common perception of the period is the Victorians are “prudish, hypocritical, stuffy, [and] narrow-minded” (Murfin 496). This perception is (as most periodic generalizations are) not universally accurate, and it is thus a grievous error to jump to the conclusion that a writer or artist fits that description merely because he or she wrote during the mid to late 19th century. Another important aspect of this period is the large-scale expansion of British imperial power.