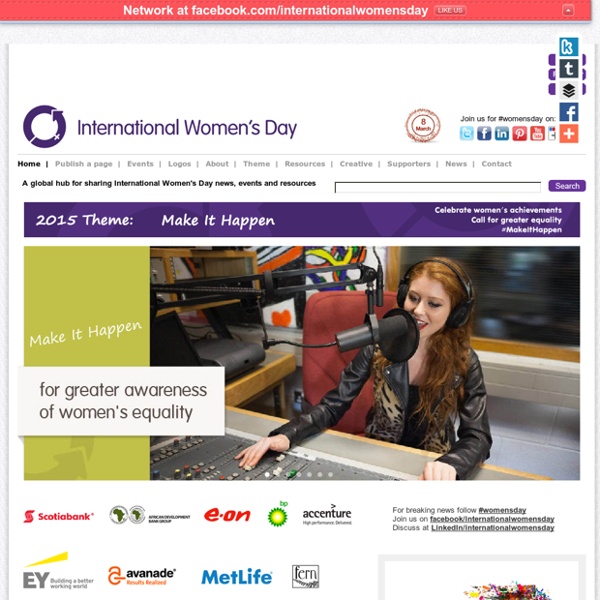 Diane MacEachern: Women Leave Rio+20 Motivated to Galvanize Sustainability Around Family Planning and Reproductive Rights There is a direct correlation between access to voluntary family planning, women's empowerment and environmental sustainability. And though the official delegates to last week's "Earth Summit" tried to water it down, thousands of grassroots activists made it one of the biggest issues to rock Rio+20, as the event was also called. Why? Because ensuring that women have full reproductive rights creates one of the most desirable "two-fers" on the planet. Women took these issues to Rio because more than 200 million women in the U.S. and around the world cannot choose whether or when to have a baby, simply because they don't have access to voluntary family planning. In the end, as Grist reported, the Rio+20 outcome document -- though 49 pages long and consisting of 23,917 words -- mentions women in less than 0.01 percent of the entire text. This did not sit well with Hillary Rodham Clinton, the U.S. Dr. "We will keep organizing well beyond the confines of this conference.

RT @usmannrana Why #Muslims should embrace same-sex marriage #LGBT #Gay #GayMarriage via @gaystarnews Marriage is not about me, me, me but a bond between two people who are in love and want to show the world their commitment to each other. This is a something the opponents of gay marriage – religious or otherwise – do not seem to grasp. It’s why gay marriage is important and necessary, so we can be equal to our heterosexual friends and companions. As GSN has pointed out there is a big difference between marriage and civil partnership. And to those who oppose equal gay and lesbian marriage, the answer is simple – if you do not like gay marriage don’t marry someone who is gay. In the eyes of the law, marriage is not a religious institution but a civil issue. In the case of the UK, religious groups that oppose gay marriage have nothing to fear. Religious institutions including some in my own, Islam, have expressed their concern on the redefinition of marriage, but their arguments have no basis. In my interpretation of Islam and understanding of the Quran, homosexuality is not a sin.

How Hollywood is Shaping Up on the Feminist Front For all the feminists out there – and those who want to see significant female presence in movies (beyond boobs and butts), this is a video that runs through the movies that were nominated for Best Picture at the Oscars and measures them for how well-represented women are in the Hollywood scene. They use the Bechdel Test – what initially began as a bit of a joke now really highlights the lack of a significant female presence in films. Basically it says that if a movie passes the test it must fulfill the following conditions: The movie must contain at least 2 women.They must have namesThey must talk about something else other than a man. The question I have is: if you start placing emphasis on this rule in movies, will you end up getting scenes where women speak to each other just for the sake of it? It’s an interesting concern about the representation of women in today’s media. What do you guys think? [Via Feminist Frequency]

20 Beautiful Fonts for Big and Effective Headlines | WebDesignFan.com Typography is one of the most important design element. Design with good typography looks better and is easier to read or scan the content. Headlines are important typography design element. It help users to find out what is most important in content. In this article you will find 20 beautiful fonts for creating big and effective headlines in your designs. Franchise Nevis Molot CollegiateFLF Museo Expressway GreatLakes Delicious Telegrafico Bebas Pirulen ChunkFive League Gothic PublicGothic Forque Tertre Gnuolane Kilogram Herald Seattle Sans Guaranteed success for 642-902 and 642-813 on first attempt!

English - About us - Issues & Projects - Project: Putting Gender Equality Central Putting Gender Equality Central; a project to promote a gender and human rights perspective in WECF's activities In an effort to mainstream gender issues in WECF’s work and organisation, this year a project is executed to promote a gender and human rights perspective in WECF’s activities. Irene Dankelman, gender-environment expert from the Netherlands, has been asked to guide this process. Main aspects include the development of a gender policy and strategy for WECF, building on the experiences from partners and the secretariat so far. This strategy will be part of the overall strategy that WECF is developing for the period 2009-2014. The development of a brochure on Sustainable Sanitation and Gender issues, and discussions around it, are part of the project. WECF wants to bring a focus on the importance of gender equality into the global climate change discussions at the UNFCCC COP14 meeting in Poznan (Poland) later this year. More information: irene.dankelman @ hetnet.nl

92% of Latinos Who Support Same-Sex Immigration Reform Want It Included in #CIR via @HuffPostPol WASHINGTON -- Nearly two-thirds of Latino voters support allowing same-sex couples equal immigration rights, according to a poll released Friday, contradicting the often-repeated line that those voters are more socially conservative than average. The poll was conducted by polling firm Latino Decisions for the group Immigration Equality, which advocates for same-sex couples to be included in reform. Under current law, same-sex couples do not have the same immigration rights as heterosexual ones. When asked whether same-sex partners should be allowed to petition for legal residency for a spouse, 64 percent of Latino voters said they would support such a policy, while 24 percent said they would oppose it. Most Latinos who self-identified as Catholic or evangelical also supported provisions for same-sex couples. But including same-sex couples in immigration reform will be politically difficult. "Which is more important: LGBT or border security?"

Every Woman's Right to Learn [Background] [Aims] [Audience] [Programme] [Event Information] [Application Conditions] Background Our vision Imagine a world where the ambitions, dreams, talents and skills of girls and women are not limited by the barriers they face simply because they were born female. Imagine how the world would benefit from all their energy, creativity, brain power, passion, and 'know how'. Continuing gender inequality is an unacceptable source of large-scale injustice. NIACE has a long history of supporting women's right to learn through our research, publications and events and last year organised an event that celebrated the 100th International Women's Day. The gender gap has undoubtedly narrowed since the first International Women's Day in 1911. Learning provides a route for women of all ages and backgrounds to find and fulfil their potential, whether it is at work, in their communities, or in discovering a creative talent or passion. Top of Page Aims The conference aims to: Audience Programme

New Cell Phone Charger Turns Water into Electricity A palm-sized fuel cell that turns water into electricity aims to make wall outlets a thing of the past for charging up your cell phone. Being off the grid, or away from an AC outlet, used to mean you couldn’t charge your phone or other personal electronic devices. But a new device called the H3 charger aims to simplify on-the-go charging. Developed by Stockholm-based myFC, the H3 charger relies on portable fuel cells and is set for commercial release in Scandinavia in December, before making its way to a wider market including the United States some time in 2011. It will cost approximately $40 to $50. About the size of a sandwich, the rectangular–shaped charger houses a so-called proton exchange membrane (PEM) fuel cell. Until now, however, most PEM power devices were too bulky to carry around because they contained stacked fuel cells. The fuel cells within the H3 charger don't require these extra components because they aren't stacked vertically atop one another. Out in the Wilderness

Commission on the Status of Women-Follow-up to Beijing and Beijing + 5 Follow us on: The Commission's mandate was expanded in 1987 by ECOSOC resolution 1987/22 to include the functions of promoting the objectives of equality, development and peace, monitoring the implementation of measures for the advancement of women, and reviewing and appraising progress made at the national, subregional, regional and global levels. Following the 1995 Fourth World Conference on Women, the General Assembly mandated the Commission to integrate into its programme a follow-up process to the Conference, regularly reviewing the critical areas of concern in the Beijing Platform for Action and to develop its catalytic role in mainstreaming a gender perspective in United Nations activities. The Economic and Social Council (ECOSOC) again modified the Commission's terms of reference in 1996, in its resolution 1996/6, deciding that the Commission should: (e) Maintain and enhance public awareness and support for the implementation of the Platform for Action.

Home | Irdana - publisher of spiritual literature by women RT @AAUWHigherEd @KatieMillerOS on the next frontier for #LGBT &amp; the military We sat down with Katie Miller — a leading advocate for lesbian, gay, bisexual, and transgender (LGBT) service members and a 2013 NCCWSL Woman of Distinction — to talk about her experience coming out as a lesbian to the world and the recent policy changes surrounding female and LGBT service members. Q: Can you describe the day you decided to resign from the U.S. Military Academy and what it was like to publicly come out to America? A: Coming out to the world … I actually did an interview on The Rachel Maddow Show before I was formally discharged and there was no way I was going to be able to leave post to give this interview, and West Point certainly didn’t want that to happen. So I ended up setting up Skype so I could do a live interview with Rachel Maddow from my computer. And at that point I hadn’t even been out to my father, my brother, or my sister; the only one in my immediate family that knew about my sexuality was my mom. Q: How did you feel about the combat ban lift? I’m excited.

Further Updated Guidance Available on Equality Duties The Public Sector Equality Duty Guidance for Wales is now available from the EHRC website. As well as the legal requirements, the guidance includes eight guides on the specific duties in Wales which were set out in the Equality Act 2010 (Statutory Duties)(Wales) Regulations 2011 which became law on 06 April 2011. The EHRC has also revised some of its Jan 2011 guidance to reflect the The Equality Act 2010 (Specific Duties) Regulations 2011 which passed into law for England in Sep 2011. Further revised guides are due. The position in Scotland remains that the consultation on the revised draft Regulations for the public sector equality duty specific duties closed on the 25 November and some interim guidance on the general public sector equality duty is available pending passing into law of the revised regulations. The guidance for public authorities in Wales published on 03 Jan 2012 and for England published in Dec 2011 is available from the EHRC website