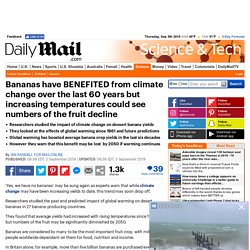 Researchers studied the past and predicted impact of global warming on desert bananas in 27 banana-producing countries. They found that average yields had increased with rising temperatures since 1961, but numbers of the fruit may be significantly diminished by 2050. Scroll down for video Loaded: 0% Limits to Climate Change Adaptation 16/11/17 Adapting Agriculture to Climate Change: Suitability of Banana Crop Production to Future Climate Change Over Uganda. FAO - 2017 - EMPREINTE CARBONE DE LA FILIÈRE DE LA BANANE. FAO - 2016 - ECUADOR’S BANANA SECTOR UNDER CLIMATE CHANGE. BIOVERSITY INTERNATIONAL 18/06/15 Bananas and climate change: what is going to happen to one of the world’s favourite fruits? Bioversity International scientists analyze the impact of climate change on banana cultivation in a new FAO book. 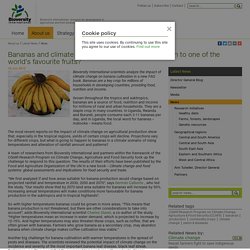 Bananas are a key crop for millions of households in developing countries, providing food, nutrition and income. Grown throughout the tropics and subtropics, bananas are a source of food, nutrition and income for millions of rural and urban households. They are a staple crop in many countries. In Uganda, Rwanda and Burundi, people consume each 3-11 bananas per day, and in Uganda, the local word for bananas – matooke – means food. The most recent reports on the impact of climate change on agricultural production show that, especially in the tropical regions, yields of certain crops will decline. 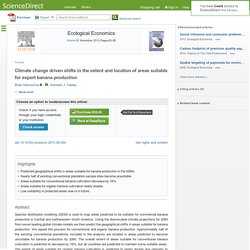 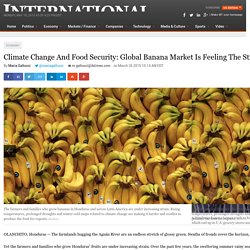 Swaths of fronds cover the horizon, while neat green bunches of curling fruit peek out from under the shade. Banana plantations thrive in this valley, bringing year-round work to those who cut, clean and package the fruit for export to the United States. Yet the farmers and families who grow Honduras’ fruits are under increasing strain. Over the past few years, the sweltering summer rainy season has grown hotter and drier, forcing producers to pump up more groundwater or turn to expensive irrigation systems. Cold spells during the current dry season are becoming even cooler, slowing the rate at which bananas ripen. “We’re living in an era of climate change,” Carlos Posas explains, gesturing toward a shroud of banana stalks during a drive through a private plantation. Outside Olanchito in northern Honduras, the farmlands hugging the Aguán River are an endless stretch of glossy green. 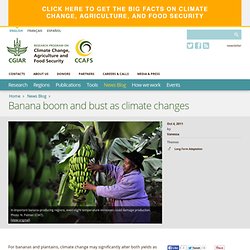 The East African Highland Banana, for example, is a starchy staple for 80 million people in Africa alone. Zoom in to see area harvested (2009) for the East Africa highland banana. The research comes from new studies on "climate proofing" key crops across the tropics. The studies by the CGIAR Research Program on Climate Change, Agriculture and Food Security (CCAFS) highlight how climate change will impact crops that are critical to food security in the developing world, and what adaptation strategies can help reduce these impacts. You can now explore the data behind the studies together with photos and videos of farmers in the affected regions on the newly launched Adaptation and Mitigation Knowledge Network. Warmer weather raises banana disease risk.