How to Think About the Mind 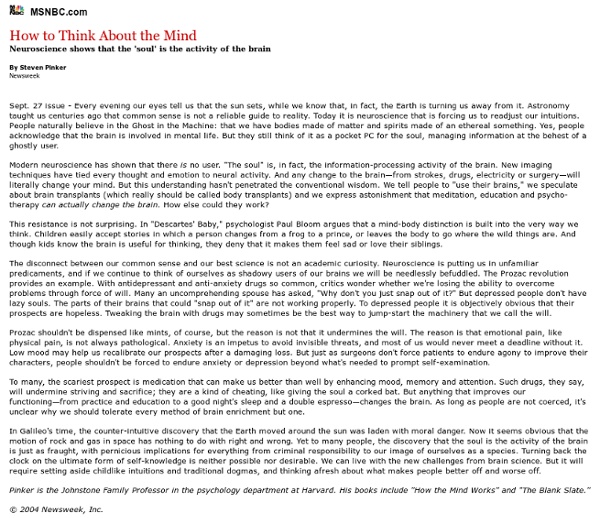 How to Think About the MindNeuroscience shows that the 'soul' is the activity of the brain Sept. 27 issue - Every evening our eyes tell us that the sun sets, while we know that, in fact, the Earth is turning us away from it. Astronomy taught us centuries ago that common sense is not a reliable guide to reality. Today it is neuroscience that is forcing us to readjust our intuitions. People naturally believe in the Ghost in the Machine: that we have bodies made of matter and spirits made of an ethereal something. Yes, people acknowledge that the brain is involved in mental life. Modern neuroscience has shown that there is no user. This resistance is not surprising. The disconnect between our common sense and our best science is not an academic curiosity. Prozac shouldn't be dispensed like mints, of course, but the reason is not that it undermines the will. To many, the scariest prospect is medication that can make us better than well by enhancing mood, memory and attention.

Top 10 Mysteries of the Mind by Jeanna Bryner, Live Science Managing Editor | October 09, 2007 01:25pm ET Credit: NIH, NIDA Much of what we don't understand about being human is simply in our heads. The brain is a befuddling organ, as are the very questions of life and death, consciousness, sleep, and much more. Here's a heads-up on what's known and what's not understood about your noggin. Author Bio

The Brain-Information about the Brain 1 Introduction “I think, therefore I am.” —René Descartes, 17th-century philosopher Few of us question the crucial importance of the brain. It is vital to our existence. Expanding the Science and Practice of Gratitude For too long, we’ve taken gratitude for granted. Yes, “thank you” is an essential, everyday part of family dinners, trips to the store, business deals, and political negotiations. That might be why so many people have dismissed gratitude as simple, obvious, and unworthy of serious attention. But that’s starting to change. Recently scientists have begun to chart a course of research aimed at understanding gratitude and the circumstances in which it flourishes or diminishes. They’re finding that people who practice gratitude consistently report a host of benefits:

Does Language Shape What We Think? My seventh-grade English teacher exhorted us to study vocabulary with the following: "We think in words. The more words you know, the more thoughts you can have." This compound notion that language allows you to have ideas otherwise un-haveable, and that by extension people who own different words live in different conceptual worlds -- called "Whorfianism" after its academic evangelist, Benjamin Lee Whorf -- is so pervasive in modern thought as to be unremarkable. Eskimos, as is commonly reported, have myriads of words for snow, affecting how they perceive frozen percipitation. A popular book on English notes that, unlike English, "French and German can distinguish between knowledge that results from recognition ... and knowledge that results from understanding." Politicians try to win the rhetorical battle ("pro-life" vs.

Universal mind Universal Mind is the universal higher consciousness or source of being in some forms of esoteric or New Thought and spiritual philosophy . It may be considered synonymous with the subjective mind or it may be referred to in the context of creative visualization , usually with religious or spiritual themes. The word originally derived from Hegel . [ citation needed ] Definition [ edit ] Universal mind may be defined as the nonlocal and atemporal hive mind of all aggregates, components, knowledges, constituents, relationships, personalities, entities, technologies, processes and cycles of the Universe . [ clarification needed ] [ citation needed ]

A Healthy Nervous System: A Delicate Balance Search current video 1. Start of Lecture 3 2. 8 Things Everybody Ought to Know About Concentrating “Music helps me concentrate,” Mike said to me glancing briefly over his shoulder. Mike was in his room writing a paper for his U.S. History class. On his desk next to his computer sat crunched Red Bulls, empty Gatorade bottles, some extra pocket change and scattered pieces of paper. Brain Atlas - Introduction The central nervous system (CNS) consists of the brain and the spinal cord, immersed in the cerebrospinal fluid (CSF). Weighing about 3 pounds (1.4 kilograms), the brain consists of three main structures: the cerebrum, the cerebellum and the brainstem. Cerebrum - divided into two hemispheres (left and right), each consists of four lobes (frontal, parietal, occipital and temporal). The outer layer of the brain is known as the cerebral cortex or the ‘grey matter’. It covers the nuclei deep within the cerebral hemisphere e.g. the basal ganglia; the structure called the thalamus, and the ‘white matter’, which consists mostly of myelinated axons.

Enhancing Brains Editor’s note: In 2008, Henry T. Greely, a professor at Stanford Law School, co-authored a commentary in Nature; it concluded that “safe and effective cognitive enhancers will benefit both the individual and society.” The article inspired an impressive number of responses from readers, and the debate has continued in scholarly journals and the mainstream media in the years following publication.

Georg Wilhelm Friedrich Hegel The birthplace of Hegel in Stuttgart, which now houses The Hegel Museum Georg Wilhelm Friedrich Hegel (German: [ˈɡeɔɐ̯k ˈvɪlhɛlm ˈfʁiːdʁɪç ˈheːɡəl]; August 27, 1770 – November 14, 1831) was a German philosopher, and a major figure in German Idealism. His historicist and idealist account of reality revolutionized European philosophy and was an important precursor to Continental philosophy and Marxism.

Related:  Neuroscience • Neuroscience • brain • Neuroscience • Medical and Philiosophical • Neuroscience
Related:  Neurosciences - brain structure   -  About the Brain   -  psychology   -  Gestalt psychology - Wikipedia, the free encyclopedia   -  How to Write a Synopsis of Your Novel   -  How to Plot a Novel With Index Cards | eHow   -  How It Works | Holacracy   -  25 Unique Places to Find Story Ideas   -  Creative Writing Worksheets--The Writer's Craft   -  How to Organize and Develop Ideas for Your Novel   -  NOVA Elements on the App Store on iTunes   -  Writing Fiction: How to Structure a Killer Novel Ending   -  Genetics   -  Freytag's Pyrmaid   -  Plot Generator   -  Damn it Neil, the name is Nuwanda. | 10 Ways to Create a Plot Twist   -  The%20Story%20Spine.pdf   -  Famous Authors’ Handwritten Outlines for Great Works of Literature – Flavorwire   -  The NEW Periodic Table Song (In Order) - YouTube   -  Here's what Pangea looks like mapped with modern political borders   -  Grammar Girl : Active Voice Versus Passive Voice :: Quick and Dirty Tips ™   -  The Making of the Fittest: Got Lactase? The Co-evolution of Genes and Culture   -  Skillswise - Sentence structure   -  Purdue OWL Writing Exercises   -  How a Scene List Can Change Your Novel-Writing Life   -  How to tell a great story, visualized | TED Blog   -  Simon Sinek: Why Leaders Eat Last - YouTube   -  Grammar Girl : First, Second, and Third Person :: Quick and Dirty Tips ™   -  The Seven Basic Plots - Wikipedia, the free encyclopedia   -  The Universal Shapes of Stories, According to Kurt Vonnegut   -  The Inner Struggle: Guides for Using Inner Conflict That Make Sense   -  A Neuroscientist’s Radical Theory of How Networks Become Conscious   -  The Subplot - Not Second Place, but Side by Side - Writers Write   -  | NASA Wavelength Digital Library   -  7 Keys To Write the Perfect First Line of a Novel - The Write Practice   -  SVOMPT - word order in English   -  How To Create An Intriguing Inciting Incident - The Script Lab   -  Elements of Suspense in Writing: 6 Secret to Creating and Sustaining Suspense   -  7 Steps for Writing a Novel in Scenes - Live Write Breathe   -  Sentence Structure: Learn about the four types of sentences!