7 Steps for Writing a Novel in Scenes - Live Write Breathe 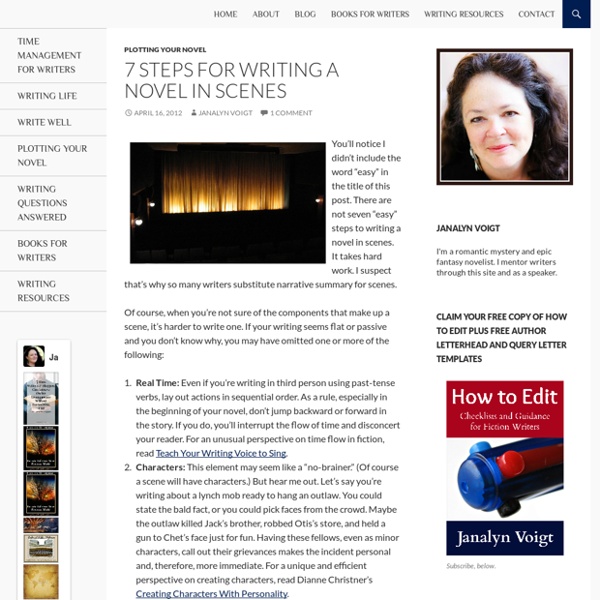 You’ll notice I didn’t include the word “easy” in the title of this post. There are not seven “easy” steps to writing a novel in scenes. It takes hard work. Of course, when you’re not sure of the components that make up a scene, it’s harder to write one. Real Time: Even if you’re writing in third person using past-tense verbs, lay out actions in sequential order. Telling a cohesive story through scenes is an art that, once mastered, will breathe life into your writing. What are your tips for writing scenes? Need a good book to read? DawnSinger, Tales of Faeraven #1 by Janalyn Voigt A headstrong young princess and the guardian sworn to protect her fly on winged horses to the Gate of Life above the Well of Light in a desperate bid to release the DawnKing, and the salvation he offers, into a divided land. Purchase DawnSinger today! ©2013 by Janalyn Voigt Related:  dianemarycowan2 • Structure

Writing Characters Using Conflict & Backstory Seven Steps To Creating Characters That Write Themselves Creating characters that are believable takes time and discipline. Creating dynamically real individuals and not imposing your own thoughts and impressions upon them is not easy to do, and is often the difference between a novel or screenplay that sits in a closet and one that finds its way around town and into the hands of audiences. Spending your time building your characters before they enter the world of your story makes the process of writing an easier and more enjoyable ride, and creates a finished product that agents, publishers, producers and readers can truly be excited by. You must first agree to operate from the understanding that the three-dimensionality of your characters is not created magically. The complexity that you desire comes through: 1. The first key to deepening your work is finding the major motivators in the lives of your characters that drive their actions. 2. 3. 4. 5. Emotions are extreme. 6. 7.

Society of Children's Book Writers and Illustrators How to Make a Storyboard Before a house is built, the architect draws a plan of the house. Similarly, in creating a book, the illustrator first draws a plan--the storyboard. The story board is a two dimensional model, with all the pages of the book laid out on one piece of paper. Figure 1. Now mark the page numbers clearly below the appropriate squares. In planning a picture book, stick with 32 pages whenever possible, as this is the length most publishers prefer. descriptive words chart How to Write a Synopsis of Your Novel by Glen C. Strathy* To sell your novel, you may need to know how to write a synopsis, even if you are a pantser-type novelist who can write a whole novel without making an outline first. Agents and publishers will often ask for a synopsis along with sample chapters before they request a complete manuscript. The biggest mistake most people make when they try to write a synopsis for the first time is to create a bare bones plot summary, along the lines of “First this happens, then this happens, then this happens...” Synopses written this way tend to be so dry and boring even the author would have trouble understanding why anyone would want to read the full novel. Imagine, for example, if a sports writer described a hockey game as “First one team scored. What makes a hockey game or a novel mesmerizing is not a step-by-step description of what happens, but the emotions that accompany the actions, the anticipation, fear, hope, excitement, and disappointment at each turn of events.

Novel Writing Help How To Create An Intriguing Inciting Incident Every single element between the first page and the very last page of a screenplay is arguably the most important, salable thing about it. In this article, the beginning of the plot takes the number one spot. However, the plot really can’t begin being awesome until it is set in motion. That’s where the inciting event comes in. A good plot is everything that transpires in the screenplay and, if it’s captivating, will have an equally captivating inciting event. First, the reader/audience has to care about the character they’re following. Even if the main character isn’t all that interesting, the situations or surroundings that make up their world can be what keeps the audience engaged. Now that we have a good starting point, we have to make the inciting event big. In Star Wars: Episode IV, the inciting event is Luke Skywalker discovering that his family has been killed. In Disney’s The Lion King, Mufasa has a son who will inherit the throne from him.

6 Ways to Hook Your Readers Although I consider myself an avid reader, I must admit I have a short attention span when it comes to getting into books. If you fail to grab my attention in the first few lines, I start spacing out. Most readers are like me. Here are a few things I find annoying in the first lines of a story: Dialogue. The last thing you want to do as a writer is annoy or bore people. (N.B. 1. Put a question in your readers’ minds. “Those old cows knew trouble was coming before we did.” 2. By starting at an important moment in the story, your reader is more likely to want to continue so he or she can discover what will happen next. “It was dark where she was crouched but the little girl did as she’d been told.” 3. Description is good when it encourages people to paint a picture in their minds. “Last night I dreamt I went to Manderley again.” 4. The promise of reading more about a character you find intriguing will, no doubt, draw you into a story’s narrative. 5. 6.

Stephen King's Top 20 Rules for Writers Image by the USO, via Flickr Commons In one of my favorite Stephen King interviews, for The Atlantic, he talks at length about the vital importance of a good opening line. “There are all sorts of theories,” he says, “it’s a tricky thing.” We’ve talked so much about the reader, but you can’t forget that the opening line is important to the writer, too. This is excellent advice. Revision in the second draft, “one of them, anyway,” may “necessitate some big changes” says King in his 2000 memoir slash writing guide On Writing. 1. 2. 3. 4. 5. 6. 7. 8. 9. 10. 11. 12. 13. 14. 15. 16. 17. 18. 19. 20. See a fuller exposition of King’s writing wisdom at Barnes & Noble’s blog. Related Content: Stephen King Creates a List of 96 Books for Aspiring Writers to Read Stephen King Writes A Letter to His 16-Year-Old Self: “Stay Away from Recreational Drugs” Ray Bradbury Offers 12 Essential Writing Tips and Explains Why Literature Saves Civilization Kurt Vonnegut’s Eight Tips on How to Write a Good Short Story

Charts and Diagrams Drawn by Famous Authors Being the literary nerds that we are over here, we’re obsessed with everything about our favorite authors, and particularly the little scraps of writerly intention — things that give us a view into an author’s thought process and planning technique, or even just a peek at the way they see and order the world. Plus, we like to see that authors work out their thoughts with forced attempts at organization and scribbled-out ideas just like the rest of us. Writers often use plot charts to organize the threads of complicated stories, but they’ve also been known to crank out diagrams of the travels of other people’s characters, chart-style teaching tools, and even hand-drawn maps. Jack Kerouac.

Create A Plot Outline In 8 Easy Steps By Glen C. Strathy How would you like to create a plot outline for your novel in less than an hour that is emotionally compelling and dramatically sound? It's easier than you think. The secret is to incorporate the 8 Basic Plot Elements. Sound intriguing? I'll describe each of the eight elements in turn. On the other hand, if you already have a draft for a novel, that you're looking to revise, then ask yourself, as we go through these elements, whether you have included them in your story. 1. 15K+Save The first element to include in your plot outline is the Story Goal, which we covered in detail in the previous article, The Key to a Solid Plot: Choosing a Story Goal. For instance, let's say we want to write a story about a 38-year-old female executive who has always put off having a family for the sake of her career and now finds herself lonely and regretting her choices. There are many ways we could involve other characters in this goal. ... a mother who wants her to be happier. 2. 3.