Three Weeks in the Pyrenees - Backpacking Light. Miguel, Regarding routes, I yield to others who have hiked a greater diversity of routes in the Pyrenees (especially to Roger who has hiked GR10, GR11 and HRP), but thought I'd chime in about your concerns about access to food. 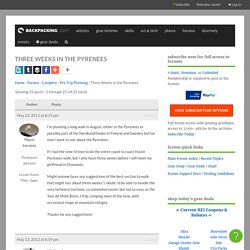 Jim and I walked the HRP abut have not been on any other trails/routes in that range. On the HRP there are several fairly long sections without a food store (at our pace 5-8 days between stores). However, in those sections there are staffed huts on a pretty regular basis and those huts serve food, even if you're not sleeping there. So if you got grounded by storms and ended up taking longer than expected to travel to the next store, you could camp outside a hut (or get a bunk in the hut) and take meals at the hut so as not to deplete your food supply while waiting out the storm.

The Haute Route Pyrenees (HRP) Firstly, I had no plan to do the HRP; I had half an idea to have a backpacking trip to the Pyrenees in 2014 but no real plan of what or where. 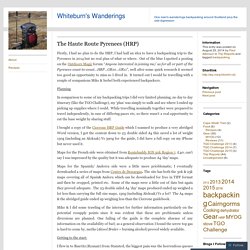 Out of the blue I spotted a posting on the Outdoors Magic forum “Anyone interested in joining me/ us for all or part of the Pyrenees coast-to-coast…HRP…GR10…GR11”, well after some quick research it seemed too good an opportunity to miss so I dived in. It turned out I would be travelling with a couple of companions Mike & Isobel both experienced backpackers. Www.senderosgr.es. Senderismo. Institut Cartogràfic i Geològic de Catalunya. IBERPIX. Ortofotos y cartografía raster. GPS trails and waypoints of the World.

Hiking in Spain. All content (other than maps) copyright © 2010-2015 Frank Revelo, maps copyright © OpenStreetMap and Frank Revelo, United States copyright office registration number TX-7931345 Be sure the check the main Hiking in Europe page for additional information and links. 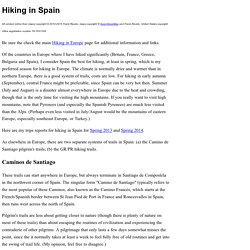 Of the countries in Europe where I have hiked significantly (Britain, France, Greece, Bulgaria and Spain), I consider Spain the best for hiking, at least in spring, which is my preferred season for hiking in Europe. The climate is normally drier and warmer than in northern Europe, there is a good system of trails, costs are low. For hiking in early autumn (September), central France might be preferable, since Spain can be very hot then. Summer (July and August) is a disaster almost everywhere in Europe due to the heat and crowding, though that is the only time for visiting the high mountains. Here are my trips reports for hiking in Spain for Spring 2013 and Spring 2014. Caminos de Santiago GR/PR trails Other trail systems. Pyrenees - GR10 or GR11 - Travel - OutdoorsMagic. Ha.. yes, I had gathered that "refugios" are often cow sheds or former cowsheds, no longer even good enough for cows. 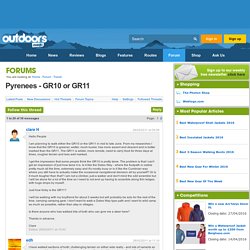 I have vague memories from about 10 yrs ago of walking down into a damp green glade where a French Monastery emerged through the glooming and the monks cooked me poulet au riz et herbes... somewhere near the med end of the GR11. I realize that I need to adjust my expectations a little. The Pyrenees High Level Route. Gmap-pedometer.com. Pyrenean Haute Route 2011: February 2011. I've now acquired the 10 maps required for the HRP, published by Rando Editions at 1:50,000: 1. 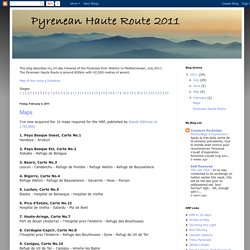 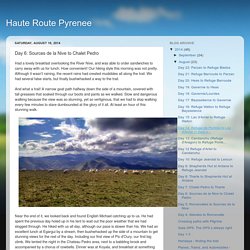 How convenient! Our hiking style this morning was not pretty. Although it wasn't raining, the recent rains had created mudslides all along the trail. We had several false starts, but finally bushwhacked a way to the trail. And what a trail! Near the end of it, we looked back and found English Michael catching up to us. Haute Route Pyrenee: Hendaye - finding the trail. Backpacking the Pyrenean Haute Route. The Pyrenean Haute Route (or HRP, for Haute Randonnée Pyrénéenne) traverses the highest walkable route across the Pyrenees Mountains, taking hikers from Hendaye, France on the Atlantic coast to Banyuls-sur-Mer on the Mediterranean. 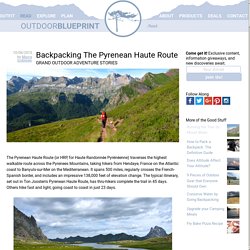 It spans 500 miles, regularly crosses the French-Spanish border, and includes an impressive 138,000 feet of elevation change. The typical itinerary, set out in Ton Joosten's Pyrenean Haute Route, has thru-hikers complete the trail in 45 days. Others hike fast and light, going coast to coast in just 23 days. Writes of Way. What comes down must go up: An attempt at the Pyrenean Haute Route Traverse At the end of June 2006, I set out to walk the length of the Pyrenees from Hendaye on the Atlantic coast of France to Banyuls-sur-Mer on the Mediterranean, by means of the HRP (Haute Randonnée Pyrénéenne) – the Pyrenean Haute Route. 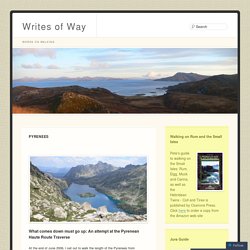 The HRP is more than 800 kilometres long and walking it involves over 40,000 metres of ascent and descent, on frequently difficult terrain, often in poor weather conditions and more than likely weighed down with a 20-odd kilo rucksack – if one elects to carry camping kit and food rather than eating and sleeping in refuges. Nonetheless, this is an enterprise that should take a fit individual between six and seven weeks of walking; I knew it would be tough, but I felt sure that I could manage it. Hendaye Plage, 800kms to go Walking towards La Rhune.