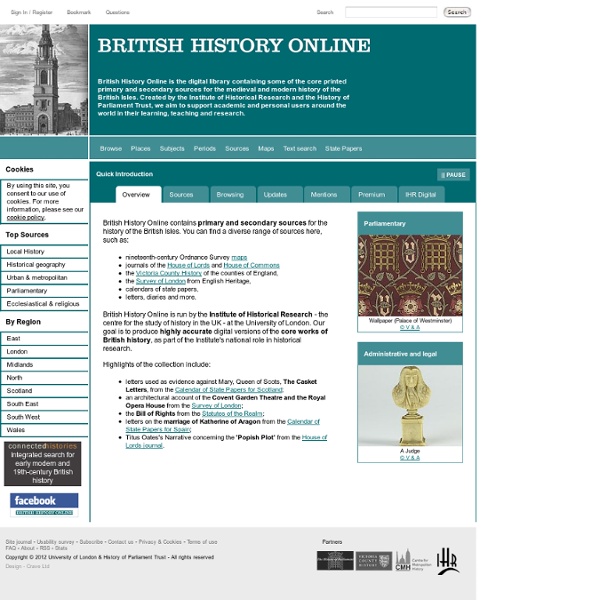 Primary sources: the texts of original documents, such as the Journals of the Houses of Commons and Lords, Acts and Ordinances of the Interregnum, and the Statutes of the Realm. Secondary texts: works by modern historians, such as the Victoria County History of the Counties of England, Fasti Ecclesiae Anglicanae, English Heritage's Survey of London, and Office Holders in Modern Britain. Guides and calendars: summaries of primary sources, prepared by modern editors, such as multiple series of the Calendars of State Papers, the Catalogue of Ancient Deeds, and the Letters and Papers of Henry VIII. Gazetteers and dictionaries: listings of places, property, goods and markets, such as Lewis's topographical dictionaries of England, Scotland and Wales, Harben's Dictionary of London, plus the Dictionary of Traded Goods.

Free Genealogy Resources - Home How to find family records using the best free Internet resources Bookmark This Site (Ctrl+D) There are literally millions of web pages on genealogy and it is easy to get lost so that you can't see the forest for the trees. Where do you go first? Let's look at the sites that are likely to give you quick and easy results. To the left you will find links to the most important British American genealogy web sites.

England Many sets of records were kept for England and Wales together, so that the problems of locating them and using them are very similar in the two countries. For convenience such records are described here, rather than on the British Isles pages. Counties N.B. History of Scotland Scotland was first decisively settled after the end of the last glacial period (in the paleolithic), roughly 10,000 years ago. Prehistoric Scotland entered the Neolithic Era about 4000 BC, the Bronze Age about 2000 BC, and the Iron Age around 700 BC. The recorded history of Scotland begins with the arrival of the Roman Empire in the 1st century, the Roman province of Britannia reached as far north as the Antonine Wall, which once ran from the Clyde to the Forth. To the north lay the territory of Caledonia, whose people were described as "Picti" in Latin, meaning ‘painted ones’. Due to constant incursions from these Picti the Roman legions would be forced back to Hadrian's Wall within 20 years of its construction, and forced to abandon the territory by the beginning of the 3rd century. The Kingdom of Scotland was united under the descendants of Kenneth MacAlpin, first king of a united Scotland.

Totally Free Ancestry Search While most people do not typically associate free genealogy research with Ancestry.com, it's actually possible to do a totally free Ancestry search. One of the best-kept secrets of the genealogy world is that are several resources on Ancestry that are available to the public free of charge. About Ancestry Directory of Royal Genealogical Data At this site I have a database containing the genealogy of the British Royal family and those linked to it via blood or marriage relationships. It contains, in fact, the genealogy of almost every ruling house in the western world because of the intermarriage that took place between them at some time or another. There are in excess of 30,000 individuals from the earliest times to the present in the database. The date spread of the records is available for those interested, as well as statistics on the ten most popular monarchs , and the most prolific readers top 10. The data may be browsed in several different ways.

History of Wales Prehistoric Wales[edit] The earliest known human remain discovered in modern-day Wales is a Neanderthal jawbone, found at the Bontnewydd Palaeolithic site in the valley of the River Elwy in North Wales, whose owner lived about 230,000 years ago in the Lower Palaeolithic period.[6][7] The Red Lady of Paviland, a human skeleton dyed in red ochre, was discovered in 1823 in one of the Paviland limestone caves of the Gower Peninsula in Swansea, South Wales. Despite the name, the skeleton is that of a young man who lived about 33,000 years ago at the end of the Upper Paleolithic Period (old stone age).[2] He is considered to be the oldest known ceremonial burial in Western Europe.

101 Ways to Research Your Family Tree for Free Is free genealogy a thing of the past? With the constant addition of subscription genealogy databases on the Internet, people often wonder if there will soon be an end to free genealogy research via the Web. For those of you with this concern, take heart - free genealogy databases aren't going anywhere anytime soon. Web sites from all over the world contain free genealogy information of use to family tree researchers which has been contributed by individuals, companies and even governments. Birth records, marriage records, military records, ships passenger lists, surnames, census records, immigration records, wills, photos and much, much more are available on the Internet for FREE if you just know where to look.

History of Northern Ireland Northern Ireland is today one of the four countries of the United Kingdom,[1][2] (although it is also described by official sources as a province[3] or a region[4]) situated in the northeast of the island of Ireland, having been created as a separate legal entity on 3 May 1921, under the Government of Ireland Act 1920.[5] The new autonomous Northern Ireland was formed from six of the nine counties of Ulster: four counties with unionist majorities, and Fermanagh and Tyrone, two[6] of the five Ulster counties which had nationalist majorities. In large part unionists, at least in the northeast, supported its creation while nationalists were opposed. Subsequently, on 6 December 1922, the whole island of Ireland became an independent dominion known as the Irish Free State but Northern Ireland immediately exercised its right to opt out of the new dominion. Resistance to Home Rule[edit] By the early 20th Century, Belfast (the largest city in Ulster) had become the largest city in Ireland.