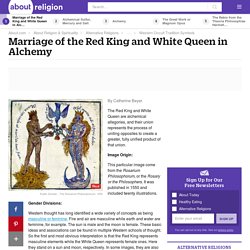 Image Origin: This particular image come from the Rosarium Philosophorum, or the Rosary or the Philosophers. It was published in 1550 and included twenty illustrations. Gender Divisions: Western thought has long identified a wide variety of concepts as being masculine or feminine. Alchemical Sulfur, Mercury and Salt. By Catherine Beyer. 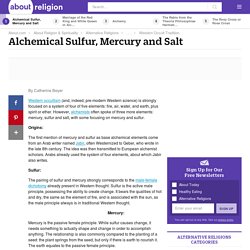 The Three Philosophical Principles. The three philosophical principles of alchemy are considered the working units of this system. 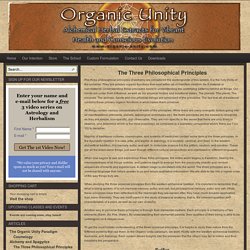 It is the holy trinity of the universe. They are primary organic functions that exist within all of manifest creation- be it material or non-material. Understanding these principles assist in understanding the underlying patterns behind all things. Our minds are under their influence, as well as our physical bodies and emotional states. Magnum opus (alchemy) Colors of the magnum opus seen on the breastplate of a figure from Splendor Solis The Squared Circle: an Alchemical Symbol illustrating the interplay of the four elements of matter symbolizing the philosopher's stone; the result of the "Great Work" The magnum opus had a variety of alchemical symbols attached to it. 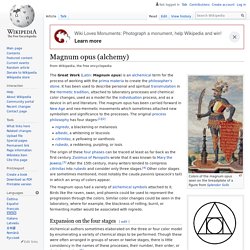 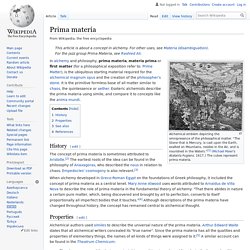 "The Stone that is Mercury, is cast upon the Earth, exalted on Mountains, resides in the Air, and is nourished in the Waters. "[1] (Michael Maier's Atalanta Fugiens. 1617.) 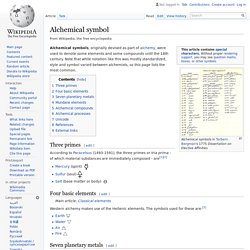 Note that while notation like this was mostly standardized, style and symbol varied between alchemists, so this page lists the most common. Three primes[edit] According to Paracelsus (1493-1591), the three primes or tria prima - of which material substances are immediately composed - are[1][2] Four basic elements[edit] Alchemy: An Allegorical Map to Consciousness Transmutation. By Tai Carmen “We are unraveling our navels so that we may ingest the sun. 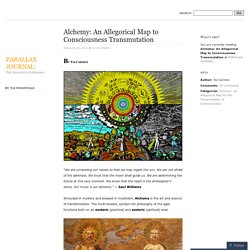 Navigating The Dark Night of the Soul. By Tai Carmen “The night sea journey takes you back to your primordial self, not the heroic self that burns out and falls to judgment, but to your original self, yourself as a sea of possibility, your greater and deeper being.” ~ Thomas Moor “There is no coming to consciousness without pain. 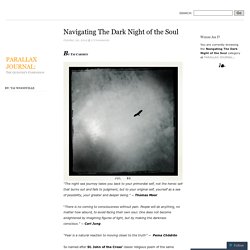 People will do anything, no matter how absurd, to avoid facing their own soul. One does not become enlightened by imagining figures of light, but by making the darkness conscious.” ~ Carl Jung “Fear is a natural reaction to moving closer to the truth” ~ Pema Chödrön So named after St. Eliade, Jung and Alchemy. While trying to understand the thinking of Eliade and Jung, I came across this article by Cerena, a graduate in Mythological Studies from Pacifica Graduate Institute… Interesting reading about a very important topic: Alchemy and the Hermetic Tradition: Mircea Eliade and Carl Jung August 9, 2009 (Excerpts) The relationship between Mythology and the Religious traditions is an intricate weaving of metaphor. 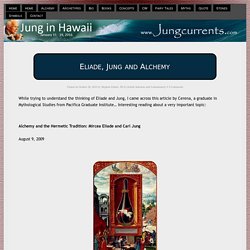 Both Mythology and Religion have the similar function of relating lived experience to a universal purpose. Alchemy: An Allegorical Map to Consciousness Transmutation. Telstra Media - Video, Sport, Music and Entertainment. Alchemy and Sufism. The alchemist who has achieved illumination. 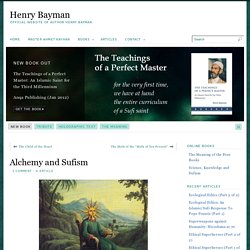 It is known that alchemy originated from Hermeti(ci)sm. Some have even considered the two synonymous. We have also seen that Sufism is the contemporary form of Hermeticism. This suggests that there should be some affinity between Sufism and alchemy. Alchemy, a Free Online Course. Alchemy is one of the oldest sciences in human history, but access to its true purpose was given only to those who were deemed worthy to receive it.

Jung's Quarternity, Mandalas, The Stone And The Self. From: By Carbonek During a difficult period in his life in which he withdrew from his teaching position and devoted much of his time investigating the nature of the unconscious, Jung frequently painted or drew mandalas, but only learned to understand the mandala symbology many years after he had begun creating the images. He understood only that he felt compelled to make the figures and that they comforted him, “Only gradually did I discover what the mandala really is: “Formation, Transformation, Eternal Mind’s eternal recreation”. Things that Quicken the Heart: Alchemical manuscripts - Cabala. THE MANLY PALMER HALL COLLECTION OF ALCHEMICAL MANUSCRIPTS, 1500-1825 Box 17 "Cabala" ca. 1700 Anonymous. 34.5 x 26.5 cm. 9 leaves.

No text. Illustrations, watercolor. [71]source Manley Hall was born in 1901,in Peterborough, Canada, to William S. and Louise Palmer Hall. The Hall family moved to the United States in 1904 and lived for a time in Sioux Falls, South Dakota. Manly Hall settled in Los Angeles in 1919. As a young man he became interested in occult matters. In 1922 Manly Hall wrote his first book on philosophy/religion, Initiates of the Flame.