Dead Scientists 2004-2011. 3 Alternative Health Doctors Found Dead In the Last 2 Weeks After Run-Ins With The Feds In the past several weeks, a number of controversial natural health doctors have died under mysterious circumstances. 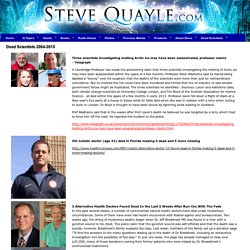 Some of them have even had recent encounters with federal agents and bureaucracies. Two weeks ago, the string of mysterious deaths began when Dr. Jeff Bradstreet MD was found in a river with a gunshot wound to his chest. The police claim that the gunshot wound was self-inflicted and that the death was a suicide, however, Bradstreet’s family suspects foul play. New York Investment Banker Jumps To His Death From Luxury Downtown Building. Yesterday, New Yorkers walking by the Ocean Luxury Rental apartment building at 1 West St around 10:40am, were greeted with a gruesome sight: a 29-year-old man had just jumped to his death from the 24th floor. 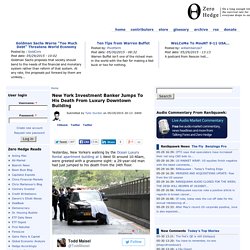 According to initial reports, the man landed on a car that was driving toward the Battery Tunnel at the time. He was pronounced DOA at the scene. Today, we learn that the tragic incident was merely the latest banker suicide, when according to the NY Post the still jumper was the latest in a long series of investment bankers who have decided to take their own life. The 29-year-old man has been identified as Thomas J Hughes. Dead / Jailed /Missing Scientists & Individuals Affiliated With The BP Oil Disaster. Why Have 74 Prominent Scientists Been Murdered In The Past Ten Years? On 14th January 2015 @ 5.39pm © Twitter Last Friday Jan 12 renowned scientist Alberto Behar crashed his small plane in the streets of L.A. shortly after take off. 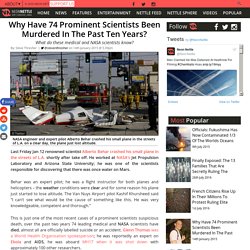 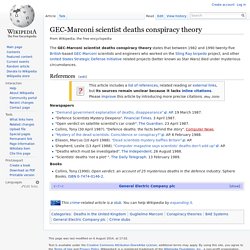 Newspapers "Demand government explanation of deaths, disappearance". AP. 19 March 1987. "Defence Scientists Mystery Deepens". Financial Times. 3 April 1987. Books. Why have so many scientists been mysteriously killed over the last 24 months? (NaturalNews) A number of experienced scientists have died, often under mysterious conditions, over the past couple of years, the latest being a NASA expert in robotics who worked on space missions. 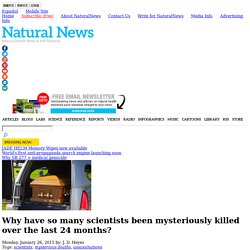 As reported by Britain's Daily Mail, the latest scientist casualty is Alberto Behar, 47, of Scottsdale, Arizona, who was killed instantly when the small plane he was piloting recently crashed into a Los Angeles intersection in a nosedive shortly after take-off. The paper said the plane took off from Van Nuys Airport, according to the LA County Coroner. Behar, the paper continued, worked at the Jet Propulsion Laboratory (JPL) in Pasadena for 23 years and was also a research professor at Arizona State University. He worked on a pair of Mars missions and had spent years researching how robots would work in hard conditions and environs, like volcanoes and deep underwater.

India's Nuclear Scientists Keep Dying Mysteriously. (Photo via) Indian nuclear scientists haven't had an easy time of it over the past decade. 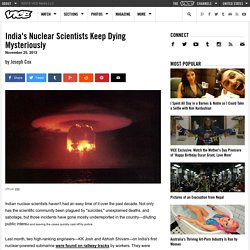 Not only has the scientific community been plagued by "suicides," unexplained deaths, and sabotage, but those incidents have gone mostly underreported in the country—diluting public interest and leaving the cases quickly cast off by police. Last month, two high-ranking engineers—KK Josh and Abhish Shivam—on India's first nuclear-powered submarine were found on railway tracks by workers. They were pulled from the line before a train could crush them, but were already dead.

List of Dead Scientists… Assassinated ?? Unfortunately this list keep growing Died 2015 Alberto Behar, Robotics expert NASA at the JPL. died instantly when his single-engine plane nosedived shortly after takeoff Friday from Van Nuys Airport He worked on two Mars missions and spent years researching how robots work in harsh environments like volcanoes and underwater As part of the NASA team exploring Mars with the Curiosity rover, Behar was responsible for a device that detected hydrogen on the planet’s surface as the rover moved. 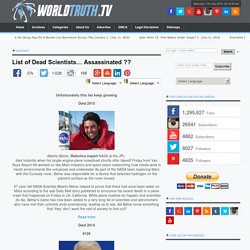 Another Dead NASA Scientist, 'SEVENTY FOUR' Scientists dead in 2 years! Friday January 12th 2015, renowned scientist Alberto Behar crashed his small plane in the streets of L.A. shortly after he had taken off. 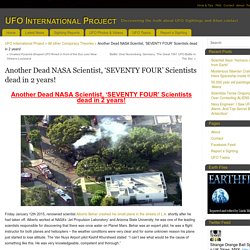 Alberto worked at NASA’s ‘Jet Propulsion Laboratory’ and Arizona State University; he was one of the leading scientists responsible for discovering that there was once water on Planet Mars. Behar was an expert pilot; he was a flight instructor for both planes and helicopters – the weather conditions were very clear and for some unknown reason his plane just started to lose altitude. The Van Nuys Airport pilot Kashif Khursheed stated “I can’t see what would be the cause of something like this. He was very knowledgeable, competent and thorough.” Marconi. Financier’s Mysterious Death Latest in a Year of Dozens / Sputnik US - News, Opinion, Radio. Thomas Gilbert, founder of Wainscott Capital Partners Fund, was found shot through the head in the bedroom of his East Side Manhattan apartment. 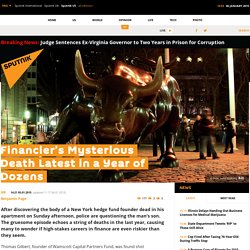 Police recovered a.40-caliber handgun at the scene. While no charges have yet been filed, police took Thomas Gilbert Jr. in for questioning Monday morning. While a motive for the shooting has yet to be determined, Gilbert Sr.’s death comes as the latest in a series of grim – and often mysterious – deaths of financiers in the past year. The Beginning of Winter. Dead Scientists Articles - Index. Dead Scientists 2004-2011. The mysterious death of UFOlogists. A news report has been making its way across a few news services featuring the theory that many UFOlogists die in mysterious circumstances. 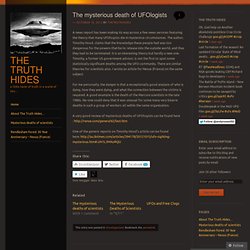 The author, Timothy Hood, claims that the knowledge these people had was too dangerous for the powers-that-be to release into the outside world, and thus they had to be terminated. It is an interesting theory but hardly a new one. Timothy, a former US government advisor, is not the first to spot some statistically significant deaths among the UFO community. There are similar theories for scientists also. I wrote an article for Nexus (France) on the same subject.

Suicides, Murders, and Mysterious Deaths Prevalent Among UFOlogists. Twilight Language: June 24: Ufologists' Deaths. Is there a mysterious linkage between June 24th deaths and strange aerial phenomena? On June 24, 1908, Grover Cleveland, the 22nd & 24th US President (1885-89, 93-97), died at the age of 71. On June 30, 1908, the Tunguska event, a large aerial explosion of unknown origins, near the Podkamennaya Tunguska River, Russia, occurred. Are UFO experts being murdered? New book to investigate 'pattern' of deaths. A crop circle researcher found floating off the coast of Portsmouth and the rapid decline of a UFO expert who believed he had found an alien skull, are the latest in what some UFO researchers claim is a ‘pattern’ of suspicious deaths of researchers into extraterrestrial sightings, stretching back to as early as 1947. A plane supposedly shot down by the U.S. military is believed to have been carrying fragments of a flying saucer, while the death of first U.S.

Secretary of Defense, James Forrestal, is believed to be UFO related. Some believe that victims number in their dozens.