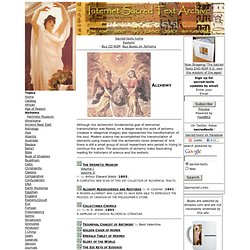 The Alchemy Web Site. Alchemy - Sacred Secrets Revealed. Solve Et Coagula - The Great Work of Alchemy. Alchemical Terminology. Horus Media: Alchemy. "serial alchemy" Part I: Rediscovered: The Life Elixirs of Paracelsus Besides the legendary “philosopher’s stone” they have been the goal of all alchemical research: the “High Arcana” of alchemy. 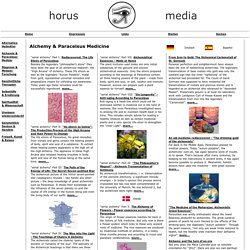 These life elixirs as well as the legendary “Aurum Potabile”, made from gold, represented universal remedies and preparations meant for unfolding our awareness. Three years ago these remedies could be successfully reproduced. more... Library - Esoteric Online. UPDATE 2/24/14: The Digital E-book and MP3 Library is currently being moved to a new server using Cloud technology, and will be a much more solid platform to be able to provide some great improvements. 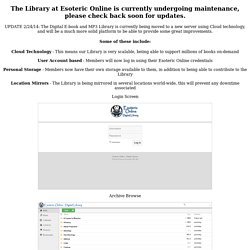 Some of these include: Cloud Technology - This means our Library is very scalable, beiing able to support millions of books on-demand User Account based - Members will now log in using their Esoteric Online credentials Personal Storage - Members now have their own storage available to them, in addition to being able to contribute to the Library Location Mirrors - The Library is being mirrored in several locations world-wide, this will prevent any downtime associated.

What is Alchemy. What are the origins of Alchemy? 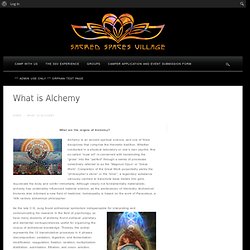 Alchemy is an ancient spiritual science, and one of three disciplines that comprise the Hermetic tradition. Whether conducted in a physical laboratory or one’s own psyche, this so-called “royal art” is concerned with transmuting the “gross” into the “perfect” through a series of processes collectively referred to as the “Magnum Opus” or “Great Work”. Alchemical texts. Golden Tractate. Golden Tractate Details Written by Hermes Trismesgistus Section I Even thus saith Hermes: Through long years I have not ceased to experiment, neither have I have spared any labour of mind And this science and art I have obtained by the sole inspiration of the living God, who judged fit to open them to me His servant, who has given to rational creatures the power of thinking and judging aright, forsaking none, or giving to any occasion to despair. 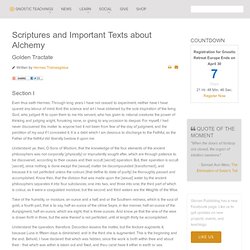 Turba Philosophorum. The Epistle of Arisleus, prefixed to the Words of the Sages, concerning the Purport of this Book, for the Benefit of Posterity, and the same being as here follows:- Arisleus, begotten of Pythagoras, a disciple of the disciples by the grace of thrice great Hermes, learning from the seat of knowledge, unto all who come after wisheth health and mercy. 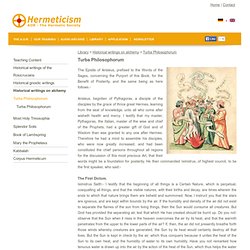 I testify that my master, Pythagoras, the Italian, master of the wise and chief of the Prophets, had a greater gift of God and of Wisdom than was granted to any one after Hermes. Therefore he had a mind to assemble his disciples, who were now greatly increased, and had been constituted the chief persons throughout all regions for the discussion of this most precious Art, that their words might be a foundation for posterity. He then commanded Iximidrus, of highest council, to be the first speaker, who said:- The Hermetic Museum, Vol. I: The Sophic Hydrolith. Sacred Texts Alchemy Index Previous Next Buy this Book at Amazon.com. 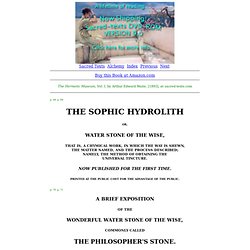 Books to Read: Alchemy. A Threefold Alchemical Journey Through the Book of Lambspring. The Alchemy web site on Levity.com Adam McLean © Back to symbolism page. 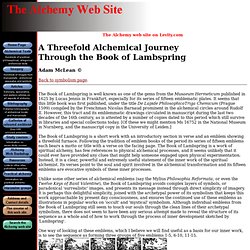 The Book of Lambspring is well known as one of the gems from the Musaeum Hermeticum published in 1625 by Lucas Jennis in Frankfurt, especially for its series of fifteen emblematic plates. It seems that this little book was first published, under the title De Lapide PhilosophicoTriga Chemicum (Prague 1599) compiled by the Frenchman Nicolas Barnaud prominent in the alchemical circles around Rudolf II. However, this tract and its emblemmatic drawings circulated in manuscript during the last two decades of the 16th century, as is attested by a number of copies dated to this period which still survive in libraries and special collections today. The Book of Lambspring is a short work with an introductory section in verse and an emblem showing a threefold furnace. A clue to this is given in the title page illustration which shows a threefold furnace, Once we look at the emblems in this way distinct patterns can be seen.

Solve Et Coagula - The Great Work of Alchemy. Modern Alchemy. Esoteric gnosis is a gate one must be ready to cross. 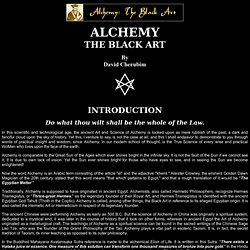 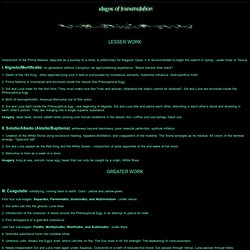 Alchemy 101 - Iona Miller Home, 2013. History of Alchemy from Ancient Egypt to Modern Times - AlchemyLab.com. The Alchemists The roots of alchemy date back to ancient Egypt and a mysterious document called the Emerald Tablet. To most of us, the word “alchemy” calls up the picture of a medieval and slightly sinister laboratory in which an aged, black-robed wizard broods over the crucibles and alembics that are to bring within his reach the Philosopher’s Stone, and with that discovery, the formula for the Elixir of life and the transmutation of metals. But one can scarcely dismiss so lightly the science — or art, if you will –that won to its service the lifelong devotion of men of culture and attainment from every race and clime over a period of thousands of years, for the beginnings of alchemy are hidden in the mists of time. Such a science is something far more than an outlet for a few eccentric old men in their dotage. The accounts of their lives almost without exception lead us to believe that they were concerned with things spiritual rather than with things temporal.