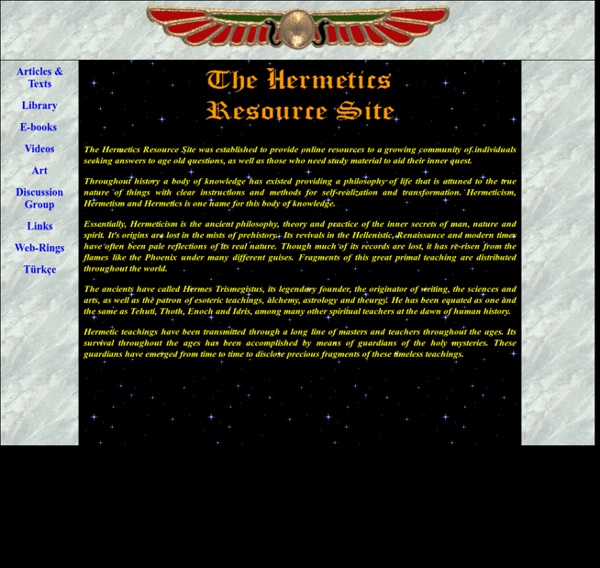 Introduction to Gematria – Hebrew Numerology In Hebrew, each letter possesses a numerical value. Gematria is the calculation of the numerical equivalence of letters, words, or phrases, and, on that basis, gaining, insight into interrelation of different concepts and exploring the interrelationship between words and ideas. Here is a basic introduction to Gematria that discusses different systems for identifying the numerical equivalence of individual letters, how these letters can be calculated according to the implicit word-value of their names. The assumption behind this technique is that numerical equivalence is not coincidental. There are four ways to calculate equivalence of individual letters: Absolute ValueOrdinal ValueReduced ValueIntegral Reduced value The Tikunei Zohar explains that the concept of reduced value is related to the spiritual world of Yetzirah. Main Index of Gematria (Hebrew Numerology) Tools and Resources

BFE - Biofeedback Foundation of Europe A∴A∴ The Left Hand Path The Left Hand Path The left-hand and right-hand paths are a label that refer to styles of magic and occult practices. Left hand path practices are associated with Satanism, Setian, Qliphothic magic, black magic and also, dark paganism. It is compared to Right hand path practices, such as Ceremonial Magick, Qabalah, The Golden Dawn, Rosicrucian, and other forms of angelic magic, or white magic. The left hand has been associated with weakness and subversion for a very long time. It has been said that the left hand takes in and receives energy and the right hand exudes energy. The associations with left and right, have also been used in divination of events in nature. The Left, as weak, sinister, strange or odd has had a long history. © 2009 Venus Satanas References 1.

Pentagram Background The pentagram originates as one of the oldest religious symbols and was associated from its very birth with both a belief in its supernatural powers and rituals of human sacrifice. In mathematics, a pentagram (sometimes known as a pentalpha or pentangle) is the shape of a five-pointed star drawn with five straight strokes. The word pentagram comes from the Greek word πεντάγραμμον (pentagrammon), a form of πεντάγραμμος (pentagrammos) or πεντέγραμμος (pentegrammos), a word meaning roughly "five-lined" or "five lines". The earliest known use of a pentagram in any culture was found in Mesopotamia cultures during the earliest civilizations from around 2,500 to 3,500 BCE. In turn, the word UB (original name for pentagram) literally signified the most important religious ceremony of the various Sumer cities at which they sacrificed people to their most important female goddess, the "Queen of Heaven" also known as Inanna/Ishtar and in later centuries known as Athena/Cybele and Venus.

The Azrael Project Online-Westgate Necromantic Papal Bull Background A Papal Bull is a formal document issued by a Roman Death Cult Pontiff upon a major act of law, curse or claim to extend the power of the Cult over its claimed domination of the world, all nations, all people, all law and all religions. All legitimate Papal Bulls were issued on human skin, usually the skin of a sacrificed child, or some famous heretic. Forgeries are on calf skin or some other lesser medium. The first legitimate Papal Bull is probably around 1136 called Ex commisso nobis by Pope Innocent II in the claimed excommunication of the Saxon (German) Pope at Magdeburg. Unfortunately, many of the key Papal Bulls are missing (such as 1249) and most have been deliberately forged over the centuries onto calf or sheep skin, to re-write history and hide their original form on human skin. Original source and concept of Papal Bulls Official Papal Method for creating Vellum/Parchment for Bulls Concerning the Victim of the Art The highest form- succession of form

The One World Flag-- An International Symbol of Diversity. Tolerance Spoken Here. Fisher Information Fisher Information, a New Paradigm of Science : Introduction, Wave Equations, the Cooperative Universe and Related Views of Kant, Plato and Wheeler B. Roy Frieden, Ph. D., Professor Emeritus Optical Sciences Center, Univ. of Arizona roy.frieden@optics.arizona.edu To facilitate downloading, this essay is divided into 9 Sections, each of which may be separately downloaded, as listed next. Section 1: The Two Types of Fisher Information I,J Section 2: Intrinsic or Data Information I Section 3: Source Information J Section 4: Extreme Physical Information (EPI) Section 5: The Knowledge Acquisition Game Section 6: Tie-ins with Worldviews of Plato, Kant, Spinoza Section 7: The Co-operative Universe and Beyond Section 8: What Measures 'Order', and Why Does it Increase Despite the 2nd Law? Section 9: References and Recent Papers Introduction Over the past 15 or so years, it has become increasingly clear that the fundamental laws of science are expressions of the concept of information. Keywords to search on

The Musicality of The Two-Way, Magnetic-Electric Thought-Wave Universe of Walter Russell Thursday, 14 July 2011 Universal Periodic Chart (detail)- Walter Russell Outsider scientific-mystic Walter Russell developed a lifelong philosophy based on the unifying principles of forces within the cosmos – what seems like a kind of pseudo-scientifically framed offshoot of non-dualism. The most interesting elements his work are the diagrams and charts illustrating his books. They document an idiosyncratic understanding of natural phenomena such as light, magnetism, thermodynamics, waves and vibration. Esa Ruoho has collected together many illustrations from Russell’s key works in Flickr sets – images from the books The Secret of Light, The Universal One and Atomic Suicide. A strong theme running through Russell’s schematics, especially evident in his ‘Home Study Course’ is the correspondences of geometric equivalences and orders. Controlled Power Multiplication Principle as Recorded by Gravity Bar – Walter Russell