Wormhole. A wormhole, also known as an Einstein–Rosen bridge, is a hypothetical topological feature of spacetime that would fundamentally be a "shortcut" through spacetime. 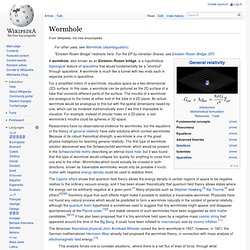 A wormhole is much like a tunnel with two ends each in separate points in spacetime. For a simplified notion of a wormhole, visualize space as a two-dimensional (2D) surface. In this case, a wormhole can be pictured as the 2D surface of a tube that connects different parts of the surface. The mouths of a wormhole are analogous to the holes at either end of the tube in a 2D plane. An actual wormhole would be analogous to this but with the spatial dimensions raised by one, which can be modeled mathematically even if we find it impossible to visualize. Researchers have no observational evidence for wormholes, but the equations of the theory of general relativity have valid solutions which contain wormholes. 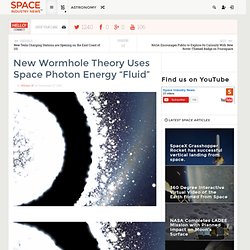 The introduction to the paper states the following. Wormholes are hypothetical geometrical structures connecting two universes or two distant parts of the same universe. For a simple visual explanation of a wormhole, consider spacetime visualized as a two-dimensional (2D) surface. If this surface is folded along a third dimension, it allows one to picture a wormhole “bridge”. [1] “A possible cause of the late-time cosmic acceleration is an exotic ﬂuid with an equation of state lying within the phantom regime, i.e., w = p/ρ < −1.

FIG. 1: The plot depicts the function H(x, a), for α = 1/2 and where the parameter x = r0/r, lying in the range 0 < x ≤ 1, has been deﬁned in order to deﬁne the entire spacetime. By using this theory an advanced civilization would , in theory, be able to mine photon “fluid” for Phantom Energy to construct micro worm holes for such things as transportation. Hidden Portals in Earth's Magnetic Field. The four identical spacecraft of NASA’s Magnetospheric Multiscale, or MMS, mission (one of which is illustrated here) fly through the boundaries of Earth’s magnetic field to study an explosive process of magnetic reconnection. 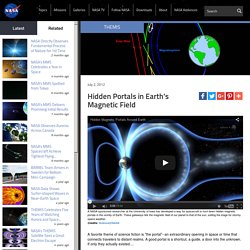