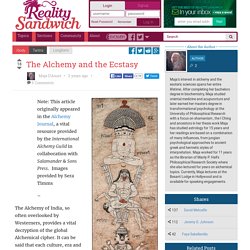 Images provided by Sera Timms The Alchemy of India, so often overlooked by Westerners, provides a vital decryption of the global Alchemical cipher. It can be said that each culture, era and individual Alchemy has passed through expresses a different aspect of its teachings and potentiality, so to emit any one amalgamation of it would only provide a disservice. To see all the intricate coils of Alchemy’s serpentine union with humanity, we must include the practices of the East. India provides a missing link alluded to but never explicitly explained in the European Alchemical texts, which provides the key to unlocking the true goal of the Magnum Opus. Yoga is Alchemy. To find out what something is, it is helpful to look at where it comes from. “The word Hatha also has a deeper esoteric significance. Footnotes: Gnosticism/Hermetica/Alchemy. Alchemy and the Endocrine System - an interview with Jose Barrera.

The Seven Planets of Alchemy. Details Written by Samael Aun Weor Although it may appear to be incredible, it is true and factually certain that the science of Endocrinology is closely related to Sexual Alchemy. 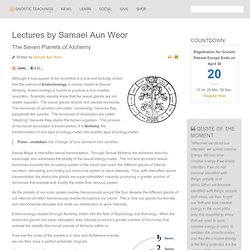 Endocrinology is bound to produce a true creative revolution. Scientists already know that the sexual glands are not sealed capsules. The sexual glands absorb and secrete hormones. Trans • mutation: the change of one element into another. Sexual Magic is intensified sexual transmutation. As the planets of our solar system revolve harmoniously around the Sun, likewise the different glands of our internal secretion harmoniously revolve throughout our blood. Endocrinology, studied through Alchemy, enters into the field of Psychology and Astrology. If we see the order of the planets in a clear and Alchemical manner, we can then draw a perfect schematic diagram.

Observe carefully. Mandala. The Secret of the Golden Flower. Translations[edit] "Gathering the light" -- an illustration of the first stage of meditation There are significant differences between the Wilhelm and Cleary translations. Wilhelm was introduced to the work by his Chinese teacher,[2] while Cleary arrived at his own translation and interpretation. Some translations are given with the word mystery for the word secret in the treatise's title. Classic works of Chinese philosophy preserve a spectrum of pre-modern science, from a time when philosophy and science were less distinct than they appear to be now.[3] The foundations of their teachings often appear incompatible with modern science, yet the teachings are of significant efficacy in providing a degree of awareness that might otherwise remain obscured by modern society’s attention to more stringent standards of rational thought (for a further discussion of possible benefits, see Meditation).

Meditation Technique[edit] Sitting primarily relates to a straight posture. Notes[edit] Alchemy Videos. The Way into the Light - The Teachings of Chakra in Alchemy. By Ulrich Arndt The aim of alchemical research and of the practical work in the laboratory is to fathom out the flow of life energy in order to illuminate’ the dark, the sick and the unconscious and ‘direct it into the light’. 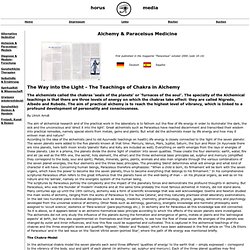 Great alchemists such as Paracelsus have reached discernment and transcribed their wisdom into practical remedies, namely special elixirs from metals, gems and plants. But what did the alchemists mean by life energy and how may it enliven man and nature? Emotion. Url?sa=t&source=web&cd=16&ved=0CDEQFjAFOAo&url=http%3A%2F%2Fpdf5368.gcjbbooks.com%2Femotional-alchemy-how-the-mind-can-heal-the-heart-PDF-14877899. Url?sa=t&source=web&cd=14&ved=0CDEQFjADOAo&url=http%3A%2F%2Fwww.alchemystudy.com%2Fdownloads%2FEmerald_Tablet-Carty(plagiarized_from_Hauck's%2520book) Ray Hagins: The False Teachings of The Apostle Paul. Orphism (religion) Orphic mosaics were found in many late-Roman villas Orphism (more rarely Orphicism) (Ancient Greek: Ὀρφικά) is the name given to a set of religious beliefs and practices[1] originating in the ancient Greek and the Hellenistic world,[2] as well as by the Thracians,[3] associated with literature ascribed to the mythical poet Orpheus, who descended into Hades and returned. 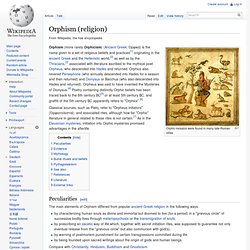 Orphics also revered Persephone (who annually descended into Hades for a season and then returned) and Dionysus or Bacchus (who also descended into Hades and returned). Orpheus was said to have invented the Mysteries of Dionysus.[4] Poetry containing distinctly Orphic beliefs has been traced back to the 6th century BC[5] or at least 5th century BC, and graffiti of the 5th century BC apparently refers to "Orphics".[6] The main elements of Orphism differed from popular ancient Greek religion in the following ways: Compare with Christianity, Hinduism, Buddhism and Gnosticism.