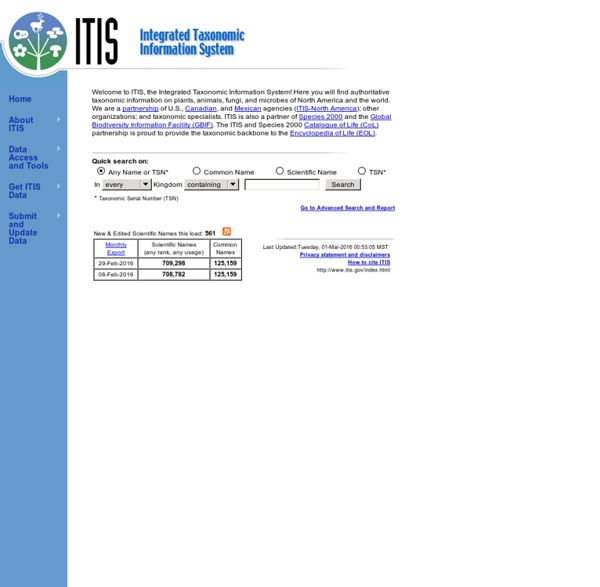 Species 2000 BIOTIC The Biological Traits Information Catalogue (BIOTIC) aims to provide scientists working within the field of benthic community ecology with an additional tool for their data analyses. Biological traits information of benthic species contained in the BIOTIC database can be downloaded and linked to benthic survey data. This may allow benthic data to be analysed not only on a taxonomic level but also on a functional level. The BIOTIC database contains information on over 40 biological trait categories on selected benthic species, together with additional supporting information, including a bibliography of literature from which the information was obtained. We would like BIOTIC to be viewed as a first source of information on which scientists can draw when conducting a traits analysis on their specific benthic datasets. Recommended citation: MarLIN, 2006. Funders Contributors

IPNI - International Plant Names Index Threats to Biodiversity | GEOG 030: Geographic Perspectives on Sustainability and Human-Environment Systems, 2011 Printer-friendly version “Extinction is the most irreversible and tragic of all environmental calamities. With each plant and animal species that disappears, a precious part of creation is callously erased.” -Michael Soulé, noted American conservation biologist It is estimated that the current rate of species extinction is between 1,000 and 100,000 times more rapid than the average rate during the last several billion years. While learning about the negative impacts of humans on biodiversity, please keep a few things in mind. There are many threats to biodiversity today. Habitat Loss: This occurs when a particular area is converted from usable to unusable habitat. Deforestation in the Amazon River Basin often occurs in a “fish-bone” pattern, meaning that larger areas of habitat are fragmented and degraded than are actually cleared for agricultural use. Credit: Wikimedia Commons Brown Tree Snake. One famous and striking example of an invasive species is the brown tree snake in Guam.

Plant List In Dead Water - Climate Change, Pollution, Over-harvest, and Invasive Species in the World's Fishing Grounds Sites with dead zones (oxygen depletion on the sea bottom) Dead zones (hypoxic i.e. oxygen deficient water) in the coastal zones are increasing, typically surrounding major industrial and agricultural centers. This is commonly occuring due to nutrient pollution, in the form of nitrogen and phosphorous leading to algal blooms and eutrophication 01 Feb 2008 - by Hugo Ahlenius, UNEP/GRID-Arendal Deep waters within and beyond areas of national jurisdiction in East Africa The figure demonstrates that the overwhelming majority of marine areas under national jurisdiction in East Africa are deeper than 200 metres (dark blue). 01 Feb 2008 - by UNEP-WCMC and UNEP/GRID-Arendal Estimated contributions to sea-level rise (1993-2003) The two main reasons for sea-level rise are thermal expansion of ocean waters as they warm, and increase in the ocean mass, principally from land-based sources of ice (glaciers and ice caps, and the ice sheets of Greenland and Antarctica). Ratio of wastewater treatment depth

Compadre-Plant trait database Botanists at Trinity College Dublin have launched a database with information that documents significant ‘life events’ for nearly 600 plant species across the globe. They clubbed together with like-minded individuals working across five different continents to compile the huge database of plant life histories, for which data have been gathered over a near 50-year span. At a time in which climate change and increasing human populations are rapidly re-shaping plant distributions, the researchers hope their COMPADRE Plant Matrix database will foster collaborations between scientists and allow them to better answer questions such as how we can conserve the species that are critical for ecosystem services, and which may provide food for billions. The botanists have just published an article in the prestigious international, peer-reviewed publication Journal of Ecology that describes the database. We rely on plants for some of our most basic needs like food, shelter and clothing. e!

marine alien species Invasive alien plant species potential distribution Alien plant species pose a major threat to South Africa’s native biodiversity. It is estimated that more than 9 000 plant species have been introduced so far. Of these, about 198 species are deemed invasive, covering 10 per cent of the country. Since the invasive plants grow by an estimated 5 per cent a year, their presence has dramatic effects on both native species and ecosystems as well as economic activities in the area. 21 Jun 2011 - by Riccardo Pravettoni, UNEP/GRID-Arendal Planet index 2007 for marine species population The Marine Species Population Index provides an assessment of the average changeover time in the populations of 217 species of marine mammals, birds, reptiles, and fish. 26 Jan 2009 - by GRID-Arendal Clearing invasive alien plant species Despite the widespread distribution and extent of alien invasive species in South Africa, actions to control such plants have had some good results. Marine species diversity

Inside Wood The InsideWood project integrates wood anatomical information from the literature and original observations into an internet-accessible database useful for research and teaching. The InsideWood database contains brief descriptions of fossil and modern woody dicots (hardwoods) from more than 200 plant families, and is searchable by an interactive, multiple-entry key. This wood anatomy web site has over 40,000 images showing anatomical details. Note: Gymnosperm woods (softwoods) are not included. Become a fan of InsideWood on facebook to get information on additions to InsideWood, and occasional comments on how-to-use the website. Also on Twitter The Facebook photo albums listed below have slide sets with background information on InsideWood, including hints and cautions about searching the IW database. "About InsideWood" with information on source of the data and the images, how to export descriptions, caveats about database content. Support InsideWood by buying the "2017.

Components | Alien Species | Ocean Health Index Australian Quarantine and Inspection Service. 2005. AQIS Fact Sheet. Bergendorf, David. 2005 Aquatic Nuisance Project Fact Sheet. US Fish and Wildlife Service. ECES (Earth Crash Earth Spirit). Raaymakers, S. Toonen, R. 2004. PHOTO(S): © Keith A. Morphobank.org - Homologies Native invaders divide loyalties California sea lion at Bonneville fish ladder. Credit: U.S. National Oceanic and Atmospheric Administration As if to mimic the weirder and weirder weather human-caused climate disruption is cooking up for us, related science stories seem to come in floods and droughts. Yes, research trends become fashionable too (imagine a science fashion show? – but I digress…). Only yesterday, the ABC published an opinion piece on the controversies surrounding which species we call ‘native’ and ‘invasive’ (based on a recent paper published in Global Ecology and Biogeography), and in June this year, Salvador Herrando-Pérez wrote a great little article on the topic entitled “The invader’s double edge“. Then today, I received a request to publish a guest post here on ConservationBytes.com from Lauren Kuehne, a research scientist in Julian Olden‘s lab at the University of Washington in Seattle. Caspian terns with juvenile salmon. Juniper encroachment in sagelands. Lauren Kuehne Like this: Like Loading...

Global Genome Biodiversity Network A Collaborative Effort to Cryo-preserve and Provide Access to Genomic Samples from Across the Tree of Life The Global Genome Biodiversity Network (GGBN) is a global network of well-managed collections of genomic tissue samples from across the Tree of Life, benefiting society through biodiversity research, development and conservation. This network will foster collaborations among repositories of molecular biodiversity in order to ensure quality standards, improve best practices, secure interoperability, and harmonize exchange of material in accordance with national and international legislation and conventions. Goals Provide genome-quality samples from across the Tree of Life for research, training, and development, thereby contributing to the conservation of global genetic diversity for generations to come.