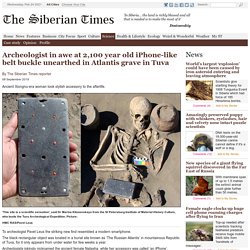 Bermuda Triangel. Fairies. Biker Pulls Over And Films Controversial Footage. This phenomenon is considered. The death ray or death beam was a theoretica… The Tunguska Event of 1908 – A Mysterious Blast 1000 Times Stronger Than The Atomic Bomb. 5 Strange Creatures Found Frozen in Ice. Nypost. GIANT balls of metal spotted falling from the sky in different parts of the world have left people baffled. 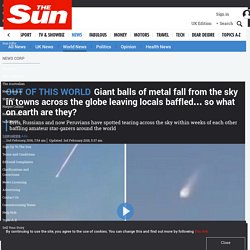 Brits, Russians and now Peruvians have spotted fireballs plummeting into their local towns within weeks of each other - so where did they come from? AFP or licensors Locals from Peru's southeastern Andean community were terrified after finding three mysterious metal objects in nearby fields. They found the huge rocks hours after dozens of pictures and videos of a blazing object, taken in Brazilian and Peruvian towns Tingo Maria and Pucalklpa, 115 miles away from each other, were uploaded on to social media. Romulo Barros, the chief of the fire service in the Brazilian municipality of Cruzeiro do Sul, said the object was most likely a meteorite. But the Peruvian Air Force confirmed the fireball was actually a Russian space rocket re-entering Earth’s atmosphere. He said: "When the debris enters the atmosphere it comes under intense friction and this causes it to set on fire.

Newsflare. Massive ‘anomaly’ lurks beneath ice in Antarctica. SCIENTISTS believe a massive object which could change our understanding of history is hidden beneath the Antarctic ice. 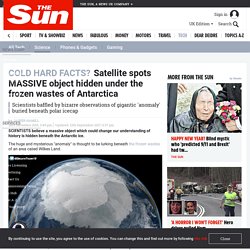 The huge and mysterious "anomaly" is thought to be lurking beneath the frozen wastes of an area called Wilkes Land. It stretches for a distance of 151 miles across and has a maximum depth of about 848 metres. Some researchers believe it is the remains of a truly massive asteroid which was more than twice the size of the Chicxulub space rock which wiped out the dinosaurs. If this explanation is true, it could mean this killer asteroid caused the Permian–Triassic extinction event which killed 96 percent of Earth's sea creatures and up to 70 percent of the vertebrate organisms living on land.

What China Found on the Moon is the Most Astonishing Space Discovery Ever. Ancient Aliens? Mysteries of the Salamanca Cathedral Astronaut Carving Revealed. In Beyond Science, Epoch Times explores research and accounts related to phenomena and theories that challenge our current knowledge. 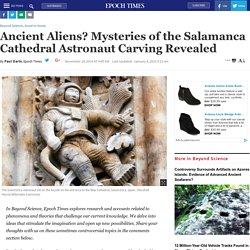 We delve into ideas that stimulate the imagination and open up new possibilities. Share your thoughts with us on these sometimes controversial topics in the comments section below. Only 2% Of The Human Population Can Hear This Mysterious Sound And Nobody Knows Why. All over the world for decades now, people have reported a very strange “humming” noise that doesn’t seem to have an identifiable origin. 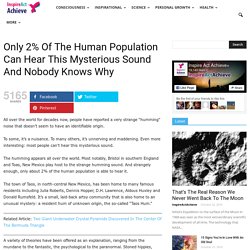 To some, it’s a nuisance. To many others, it’s unnerving and maddening. Even more interesting: most people can’t hear this mysterious sound. The humming appears all over the world. Most notably, Bristol in southern England and Toas, New Mexico play host to the strange humming sound. The town of Taos, in north-central New Mexico, has been home to many famous residents including Julia Roberts, Dennis Hopper, D.H. Researchers discover a 2 billion year old Nuclear Reactor in Africa.

Ivan Ivan has been part of the team at Universe Explorers since February 2015.He is a freelance writer, editor-in-chief of ancient-code.com He also writes for Svemir Online and Ancient Origins.History, Archaeology, Space and world’s mysteries are some of the topics he writes about.You can follow Ivan on Facebook" Latest posts by Ivan (see all) In 1972, a worker at a nuclear fuel processing plant noticed something suspicious in a routine analysis of uranium obtained from a normal mineral source from Africa. 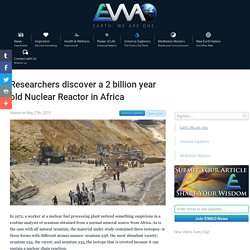 As is the case with all natural uranium, the material under study contained three isotopos- ie three forms with different atomic masses: uranium 238, the most abundant variety; uranium 234, the rarest; and uranium 235, the isotope that is coveted because it can sustain a nuclear chain reaction. Ancient Aliens - star children - history one. What The Hell Is Moving On Mars' Surface? [Video] Shocking! 200-year-old Mongolian Monk Mummy still alive! A mummified monk found in the lotus position in Mongolia is ‘not dead’ and is instead one stage away from becoming a real-life Buddha, it has been claimed. 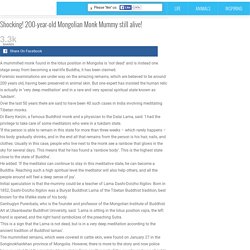 Forensic examinations are under way on the amazing remains, which are believed to be around 200 years old, having been preserved in animal skin. But one expert has insisted the human relic is actually in ‘very deep meditation’ and in a rare and very special spiritual state known as ‘tukdam’. Over the last 50 years there are said to have been 40 such cases in India involving meditating Tibetan monks. Dr Barry Kerzin, a famous Buddhist monk and a physician to the Dalai Lama, said: ‘I had the privilege to take care of some meditators who were in a tukdam state. ‘If the person is able to remain in this state for more than three weeks – which rarely happens – his body gradually shrinks, and in the end all that remains from the person is his hair, nails, and clothes.

Real life goblin captured on camera! - Amazing. Stanford University Examines Biological Entity Found In Atacama Desert. The Neanderthal’s DNA is 99.5 % identical to the human race, a chimpanzee and the DNA of great apes is 96-97% identical to a human being. 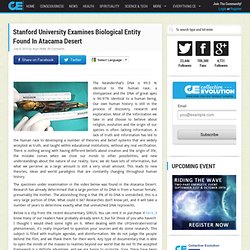 Our own human history is still in the process of discovery, research and exploration. Most of the information we take in and choose to believe about religion, evolution and the origin of our species is often lacking information. A lack of truth and information has led to the human race to developing a number of theories and belief systems that are widely accepted as truth, and taught within educational institutions, without any real verification. There is nothing wrong with having different beliefs about creation and the origin of life, the mistake comes when we close our minds to other possibilities, and new understandings about the nature of our reality. Sure, we do have lots of information, but what we perceive as a large amount is still a very small amount.

Extensive Ancient Underground Networks Discovered Throughout Europe. Ancient Origins seeks to uncover, what we believe, is one of the most important pieces of knowledge we can acquire as human beings – our beginnings. 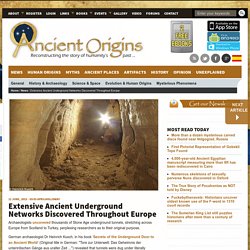 Come with us on a journey to explore lost civilisations, sacred writings, ancient places, unexplained artefacts and scientific mysteries while we seek to reconstruct and retell the story of our beginnings. EWAO 7 mysterious ‘discoveries’ that have been made on Mars in 2015. 7 Mysterious discoveries that according to Ufologists, prove Mars was inhabited We can all probably agree that 2015 was a year full of surprises on Mars. 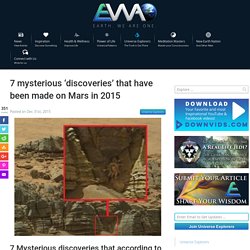 We have learned so much about the red planet that we changed our opinion about everything we previously thought about Mars. Researchers finally understood that Mars wasn’t always a desolate and inhospitable place. In 2015, scientists found out that Mars has liquid water flowing on its surface, a discovery that drastically changed everything we ever knew about Mars. The fact that NASA knows there is water on Mars means that they can pick out the best places to search for primitive life. But not only did we find out that Mars has liquid water, NASA scientists finally proved that the red planet had an atmosphere eerily similar of that of Earth in the distant past, which means that just maybe, in the distant past, Mars could have supported life, when the red planet was similar to Earth with oceans, rivers and lakes. Hieroglyphics on Mars. Massive Network of Stone Age Tunnels Found from Scotland to Turkey.

A massive network of ancient 12,000 year old underground tunnels has been discovered going across Europe from Scotland to Turkey. There are said to be literally thousands of these secret tunnels that are located north in Scotland, all the way down to the Mediterranean. German archaeologist, Dr Heinrich Kusch had written a book that details these ancient underground stone age superhighway, published in German and called "Secrets Of The Underground Door To An Ancient World.

One was taken by resident Natasha Marie’s mother-in-law, who was snapping coastal scenes during sunset. However, the sky city was later seen forming in the distance, with much speculation about what the alien object could be. Ominous cloud looming over China creates apparition of floating city. Mysterious floating city appears in the sky over China. The mysterious apparition, which many believe to have been supernatural, seemed to form a perfect city skyline when it was spotted by residents.