(44) Meditative Exercise - The Nine Demonic Gatekeeper Aligning & Empowering Method Into Outer Darkness. (26) C.Kendall & Aserial Krabat : The Younger Generation Of Black Magicians Are Rising - Part 1/2. The Assemblage Points – Toltec School. (Journal Number 4, Volume 1) Sorcerers consider the assemblage point to be the place where the flow of direct energy is turned into sensory data and interpreted as the world of everyday life. 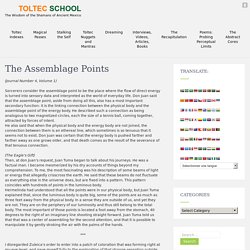 Don Juan said that the assemblage point, aside from doing all this, also has a most important secondary function: it is the linking connection between the physical body and the assemblage point of the energy body. He described such a connection as being analogous to two magnetized circles, each the size of a tennis ball, coming together, attracted by forces of intent. He also said that when the physical body and the energy body are not joined, the connection between them is an ethereal line, which sometimes is so tenuous that it seems not to exist. (10) David Blaine Sews His Mouth Shut in Insane Trick (w/Jimmy, Priyanka Chopra & The Roots) Working with Demon Belial. Full Moon Release Ritual – Cleansing and Making Space for Miracles. Untitled. Shadow People. Introduction to Spell Casting. (7) How to harness the energy of the Divine Feminine and Divine Masculine. Mind Control Demons: BEST ADVICE your favorite sorceror never gave you. 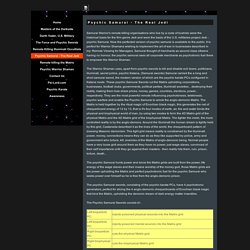 Now the perfected version of psychic samurai is available to the public. It is perfect for Warrior Shamans wishing to implement the art of war in businesses described in my: Remote Viewing for Managers. Samurai thought of merchants as second class citizens having no honour, the psychic samurai sees all corporate merchants as psychotronic fuel there to empower the Warrior Shaman. The Warrior Shaman uses, apart from psychic swords to kill and disable evil doers, politicians, illuminati, secret police, psychic Katana, (Samurai swords) Samurai carried the a long and short samurai sword, the modern version of which are the psychic karate PCs configured in Katana mode.

(2) Bases 88 Part 5 Tim Rifat Brighton and Colin Bloy Walkabout. (1) Magical Techniques: Part 1 - The Art of Scrying. (4) 36 - The Qaballa vs the Qilopth part 1.flv. (1) 16 - Cultivating the Magickal personality.flv. (9) How To Perform The Lesser Banishing Ritual Of The Pentagram. (2) 6- -Further information on the Black Sun and global death plot.flv. 44 - The Magician's circle part 1.flv. The Nine Orders of Angels. We’re going to be working on expanding our supernatural entities list. 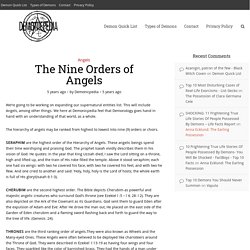 This will include Angels, among other things. We here at Demonicpedia feel that Demonology goes hand in hand with an understanding of that world, as a whole.

Texts (includes some in audio format)

Why Rituals Work. Think about the last time you were about to interview for a job, speak in front of an audience, or go on a first date. 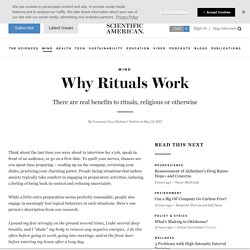 To quell your nerves, chances are you spent time preparing – reading up on the company, reviewing your slides, practicing your charming patter. People facing situations that induce anxiety typically take comfort in engaging in preparatory activities, inducing a feeling of being back in control and reducing uncertainty. While a little extra preparation seems perfectly reasonable, people also engage in seemingly less logical behaviors in such situations. Here’s one person’s description from our research: I pound my feet strongly on the ground several times, I take several deep breaths, and I "shake" my body to remove any negative energies. Recent research suggests that rituals may be more rational than they appear. Humans feel uncertain and anxious in a host of situations beyond laboratory experiments and sports – like charting new terrain. Vodoun Symbols for Their Gods. Vodoun religious practices commonly include appealing to the loa (lwa), or spirits, and inviting them to temporarily take possession of (or "ride") human bodies so that they may communicate directly with believers. 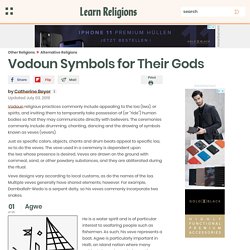 The ceremonies commonly include drumming, chanting, dancing and the drawing of symbols known as veves (vevers). Just as specific colors, objects, chants and drum beats appeal to specific loa, so to do the veves. The veve used in a ceremony is dependent upon the lwa whose presence is desired. Veves are drawn on the ground with cornmeal, sand, or other powdery substances, and they are obliterated during the ritual. Ultraculture With Jason Louv: Ep. 48: Magick, and How to Discover—and Fulfill—Your True Will. Magi Grail Shaman - Betrayal of Thoth and the Rise of ASAR. WOODWARDTV PRESENTS: THE ANIMATED COLLECTION - THOTH And The EMERALD TABLETS.

(5) Writing Old Norse in Runes (remake/improved) Water Domination Spell by Hoodoo Delish. How to Cast Spells Using Magical Timing Based on Planetary Hours. In my previous articles on how to cast spells, I discussed magical timing as determined by moon phases and by moon signs. 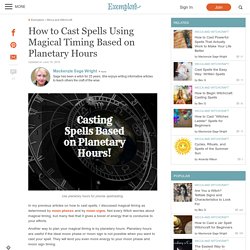 Not every Witch worries about magical timing, but many feel that it gives a boost of energy that is conducive to your efforts. Another way to plan your magical timing is by planetary hours. Planetary hours are useful if the ideal moon phase or moon sign is not possible when you want to cast your spell. They will lend you even more energy to your moon phase and moon sign timing. Calculating planetary hours requires a bit of math, but if you can tell time and divide, you will be fine. What You Need to Know to Cast Spells. (2) How to safely summon Demons for beginners. Planetary Hours: The Method and the Magick for Quick Timing Decisions.

Success often depends on being "in the right place at the right time. 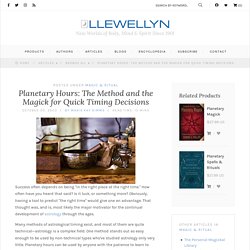 " How often have you heard that said? Is it luck, or something more? Obviously, having a tool to predict "the right time" would give one an advantage. That thought was, and is, most likely the major motivator for the continual development of astrology through the ages. Many methods of astrological timing exist, and most of them are quite technical—astrology is a complex field. "Owning Your Magick - You're Creating Whether You Like It Or Not" - Podcast Episode 27. The History Of Magic, Summoning Spirits, & John Dee. Thelema - Learning About Thelema (Episode 1)

(5) Brother Panic: Creating Magickal Entities (A How To) 46 - Basic outline of Egregore creation.flv. DIY: Making Magickal Oils. (2) Magick Elementary Theory 5 THE HOLY OIL Aleister Crowley. (2) Oil of Abramelin walkthrough Pt.1 - for use in Magick Ritual and as a general oil. The Magical Art of Shadowmancy. Shadowmancy is the magical art of manipulating shadows, and is used almost exclusively by the darkpriests of the Kasumarii tribe in Cyhalloi. 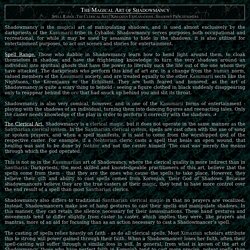 Shadowmancy serves purposes both occupational and recreational, for while it may be used by assassins to hide in the shadows, it is also utilized for entertainment purposes, to act out scenes and stories for entertainment. Spell Range. Magicology: How Magicians Control Your Mind. Magicology: How Magicians Control Your Mind Over the past couple of years, neuroscientists and magicians have been getting together to create a science that might be called "magicology". 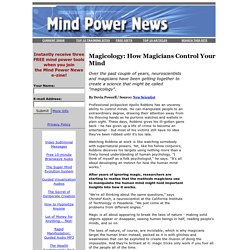 By Devin Powerll / Source: New Scientist Professional pickpocket Apollo Robbins has an uncanny ability to control minds. He can manipulate people to an extraordinary degree, drawing their attention away from his thieving hands as he purloins watches and wallets in plain sight. These days, Robbins gives his ill-gotten gains back - he has given up a life of crime to become an entertainer - but most of his victims still have no idea they've been robbed until it's too late. Watching Robbins at work is like watching somebody with supernatural powers. After years of ignoring magic, researchers are starting to realise that the methods magicians use to manipulate the human mind might hold important insights into how it works.

Jack Parsons, L Ron Hubbard & the Montauk Project. The Art of Dreaming. Sorcery is the act of embodying some specialized theoretical and practical premises about the nature and role of perception in molding the universe around us. 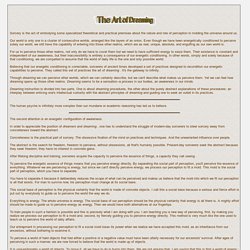 Our world is only one in a cluster of consecutive worlds, arranged like the layers of an onion. Even though we have been energetically conditioned to perceive solely our world, we still have the capability of entering into those other realms, which are as real, unique, absolute, and engulfing as our own world is. For us to perceive those other realms, not only do we have to covet them but we need to have sufficient energy to seize them. (2) Don't Freak Out During Magical Rituals (Magic uses the Scientific Method) by Stephen Skinner. Word Magic, Upgrading English & Nursery Rhymes For Troubled Times.

Keith Barry: Brain magic. Magic Is Real And There Are Three Different Types by Manly P Hall. #018 - Dr. Stephen Skinner (Part 1 of 2) Conjure Gnosis. 80. Jason Miller // The Elements of Spellcrafting & the Influence of Magick. Demons Documentary (Very Interesting and Informative) How To Evoke Spirits To Physical Appearance - Full Seminar. Channeling Creativity with Your Ketu (Controlling Your Daemon) About. The concept of the Archetype and it significance in spiritual alchemy. Quantum Sorcery. Introduction Quantum Sorcery is a magical system which presupposes that an individual can cause desired effects to be manifest in the physical world via the exertion of will. This system makes no supposition regarding the existence or influence of any sort of divine creator; rather it is based upon the premise that the human mind causes minute changes in the behavior of subatomic particles and energy fields within space/time.

These minute changes in turn cause a cascade of events to occur, which ultimately result in the desired effect. De-mystifying The Mechanics of Magick. Physics and the Basic Principle of Visualization Magick. Sacred Texts Index Previous Next Sponsored Links: Internet Book of Shadows, (Various Authors), [1999], at sacred-texts.com Introduction: For starters, I would like to say a few things about myself to set the record straight. I have a Masters degree in Quantum Field Theory, am working on my PhD in the same, and am a practicing, if tyro, shaman. The 9 Tomes of Magick - Power of Galdr and the 7 Planetary Gatekeepers. Demonic language rules and translation by ZzkronicherozZ on DeviantArt. Solomon and the Demons of the Goetia.

Arbatel Explorations with Nikolai Jones. Rune Soup. How to Practice Real Magic in the 21st Century. The Book of Immediate Magic-Jacobus Swart by sigabopha. Magical Techniques: Part 1 - The Art of Scrying.

41 - LBRP part 2.flv. Geordie Rose in his own words Tsunami of Demons is coming. Hammer of the Gods - Sorcery Magick and Animism. Between Mortals and Gods - MAGIC AND SORCERY DOCUMENTARY. Strategic Sorcery for the Financially Stuck by Jason Miller. Everything You Want to Know About Magick (But Were Afraid to Ask) by Llewellyn Worldwide, LTD. Como fazer e usar um espelho mágico by Biblioteca Digital Fernando Guedes. Manifesto. The Kalika War Party is a planetary strike force comprised of men and women volunteers who self-select into 17 bands. A common aim unites the warriors in the Party: to strike offensively against all variations of the evil and corrupt System that works against life, truth, freedom, beauty, sanity, and the spirit of mutual aid. To this end, Kalika warriors are prepared to neutralize or eliminate the key agents who run the System at the executive levels, as well as their minions and accessories, when necessary. In this way, the KWP intends to bring down the System and prevent its recovery, once and for all.

Operations Fuelled by transpersonal rage and aimed by elucidated anger, warriors in the Party pick their battles wisely and select their targets with extreme care. How Does Magick Work w/ Richard Alan Miller. Fearless Magical Protection at ConVocation 2017. Advanced Hygiene for Bliss: How to Switch on KUNDALINI with Dan Winter FractalU.com. Excelling at Evocation Full Course: How To Evoke Spirits & More!