Evernote Reaches Two Million Lifeloggers, Half Of Them Are On Th 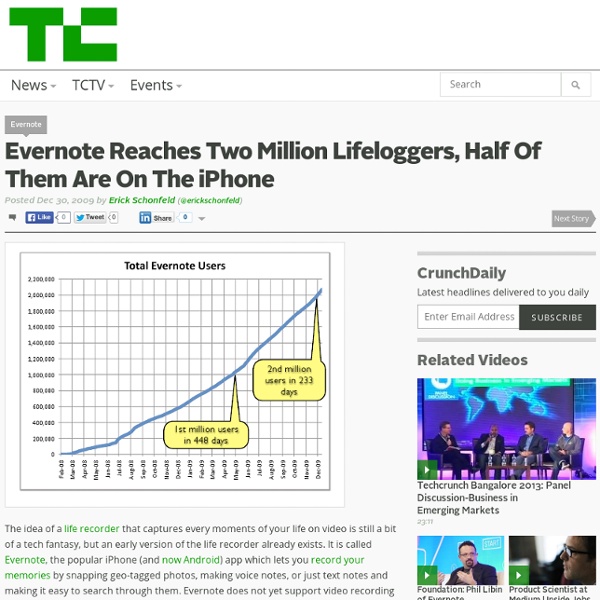 The idea of a life recorder that captures every moments of your life on video is still a bit of a tech fantasy, but an early version of the life recorder already exists. It is called Evernote, the popular iPhone (and now Android) app which lets you record your memories by snapping geo-tagged photos, making voice notes, or just text notes and making it easy to search through them. Evernote does not yet support video recording other than as an attachment (for premium subscribers), but when that becomes more practical it will. “Evernote is definitely positioned to be the lifelogging tool of choice,” says CEO Phil Libin. “That ambient video capture was my original plan for Evernote—always recording, not storing, you bookmark it—that is exactly what we want to do.” Next year Evernote will introduce voice search, which will be a big step towards that ultimate vision (if you can search audio, you can search through what was said in videos). Looking at new users per day is more instructive.

Top Ten Digital M&A Deals For 2010 Editor’s note: As the capital markets heat up and the economy continues to rebound, the deal flow is starting to open up again. We’ve already given you our top ten IPO candidates for 2010. In this guest post, Kelly Porter, an M&A expert at Woodside Capital Partners, proposes ten digital media deals he’d like to see. Digital media M&A activity is expected to pick up in 2010—big acquirers have significant cash on their balance sheets, share prices are up, and many good acquisition candidates are on the landscape. 1. YouTube arguably holds the highest potential of Google’s major growth initiatives, capturing about 38% of video viewing on the web and serving more than 1 billion streams daily. 2. Cisco’s pursuit of enterprise communications is important, and LinkedIn would be a natural and powerful extension of this strategy. 3. As many music services struggle, Pandora has reportedly skyrocketed to 40 million registered users and is adding 600,000 new users per week. 4. 5. 6. 7. 8. 9.

The Dark Side of the Late 2009 M&A Surge With the year—and decade—coming to a close, the business press has been awash with stories about just how lousy the ‘00s were. As Paul Krugman details in the New York Times, it was a decade with a tiny amount of job creation, and the first decade on record where private-sector jobs shrunk. The typical family got no economic boost at all. And when the volatility rollercoaster ended there was also no appreciation in home prices and zero gains on stocks. That pain was felt by venture capitalists as well. Dow Jones VentureSource is releasing its year-end liquidity numbers for 1999 this morning and no surprise—it’s just another data point nail in the coffin. At a high level you can put a good spin on the facts: In the fourth quarter acquisitions rebounded mightily. But as frequently happens in quarter-to-quarter surveys, that $100 million number was skewed greatly by a few large deals, most notably, Zappos’s $1.2 billion purchase by Amazon. 1. 2. 3. I’m not blaming investors.

Valuing early stage companies | Startable - Healy Jones' & Prasa Since this is my first post as a former venture capitalist I thought it might be interesting to answer a one of the more… opaque issues in venture financing. Two of the most frequent questions I got as a VC from entrepreneurs were “how much is my company worth” and “how do venture capitalists value my company?” The truth is that the answer has nothing to do with DCF’s or other business school theories, but instead is based around what the VC thinks/needs to return to their fund from that particular investment. Series A valuations Series A* valuations are usually based on percentages – as in, how much of the company does the venture capital fund want to own. Getting a higher valuation Strange as it sounds, this does imply that the more you raise the higher the valuation. Have a name-brand management team. The rational So why are valuations dependant mainly on percentage of the startup owned? The VCs are also thinking about how much of the company is owned by the management team.

You Don’t Mean Average, You Mean Median Every quarter, without fail, a bunch of articles appear talking about the venture capital industries investment pace as a result of the PWC MoneyTree report. I used to get calls from all of the Denver / Boulder area reporters about my thoughts on these – that eventually stopped when I started responding “who gives a fuck?” A few days ago I got a note from Steve Murchie about his new blog titled Angels and Pinheads. I’m glad Steve is blogging about this as he’s got plenty of experience and thoughts around the dynamics of angel investors – some that I agree with and some that I don’t. Regardless, my view is that there more there is out there, the better, as long as people engage in the conversation. In his post Mind the Gap he made an assertion that “the VC industry has effectively stopped investing in seed stage ($500K and less) and startup-stage ($2M and less) opportunities.” Steve’s response to the Startup/Seed “Average Deal Size” was “WTF??!” I’m still feeling generous (e.g.

Top Tech Acquisitions Of 2009 We track a lot of acquisitions on CrunchBase. At the beginning of 2009, acquisitions were at a standstill. But as the economy begrudgingly roused itself from recession, the deal flow started to pick up in the summer, and then rebounded more in the third quarter. We’ll update the list if necessary at the end of the year (for instance, we don’t include Yelp in our list because it is not yet final), but it is not likely to change by much. The largest announced deal, Oracle’s $7.4 billion purchase of Sun Microsystems, is still awaiting regulatory approval. Some of the more significant deals in terms of potential market impact include Amazon’s $1.2 billion shoe-buying spree with Zappos (No. 14), Google’s $750 million acquisition of mobile ad network AdMob (No. 20), and Cisco’s $590 million Pure Digital/Flip Video deal (No. 21). The top 30 tech M&A deals are below:

Amended: Twitter has NOT raised more funding. GoWalla Worth Nearly $30 Million After Financing. Time To Make Y If you were gettin’ all antsy in the pantsies about yesterday’s launch of the LG Expo and it’s detachable projector accessory, you might be a bit bewildered right now. A full day later, AT&T’s still showing no sign of the handset. WMExperts did a bit of digging, and found out that the Expo has been delayed for at least “a few days” due to shipping issues. When this sort of stuff happens, it’s generally because a cargo ship coming from Asia had to turn around for one reason or another, or otherwise never left the port. How to measure how well an online media company is scaling. « Li Two years ago I posted about the three ways to grow an online media business to $50 million in revenue. In this article I focused on RPM (Revenue per thousand pageviews, = CPM x sell through rate x # of ad units per page) and drew the distinction between three strategies, and the traffic needed for each strategy to get to scale: 1. Broad Reach, low RPM, traffic in the 10s of billions of pageviews/mth 2. 3. I think using CPM/RPM in this is a useful framework to think about strategy, but it isn’t necessarily the most useful way to think about howe well an online media business is scaling. Direct sales shows real economies of scale. Right now, the key measure that I use to judge how well an online media company is scaling is by looking at quarterly revenue by advertiser. What do readers think about this measure of how well an online media company is scaling?

KODA Secures Another $1.5 Million For Its Social Jobs Site KODA.us, a social recruitment service for employers to recruit young professionals, has received an additional $1.5 million injection of private angel funding. Back in August last year it raised $1 million in angel funding on top of an existing $2 million, so it now has, you guessed it, $4.5m in capital. How Much is Twitter Worth? Less Than You Think Twitter, the San Francisco-based micro-messaging startup, recently raised about $98 million dollars from T. Rowe Price, Insight Venture Partners, Spark Capital and Institutional Venture Partners, valuing the company at a whopping $1.1 billion. NeXt Up Research, the firm founded by veteran financial analyst Michael Moe, disagrees with that post-money valuation, and instead values Twitter at about $526-$674 million. NeXt Up’s research report is offered to users of SharesPost, a Santa Monica, Calif.-based private online exchange that allows the sale of shares of private companies to willing buyers. The company‘s revenue model has yet to be tested. They are estimating that Twitter will make between $114 million and $134 million in 2013 and between $126 million and $148 million in 2014.

Skype Hits 521 Million Users And $185 Million In Quarterly Reven Even though it is embroiled in a nasty legal battle with its founders over its future, Skype continues to rack up impressive numbers. In today’s third quarter earnings from eBay (which still owns Skype, but is preparing to unload it), the company breaks out Skype’s performance (see slide above). Skype’s registered users grew 41 percent to 521 million people. All of those SkypeOut calls translated to a healthy $185 million in revenues, up 29 percent from a year ago. Skype was one of the few bright spots in eBay’s earnings, along with Paypal, which brought in $688 million in revenues (up 15 percent). eBay’s bread-and-butter marketplaces business was down 1 percent to $1.365 billion. eBay Q309EarningsSlides FINAL

One billion users, $1 billion: how did Twitter get the numbers? A company valued by its private investors at $1 billion, with nary any revenue in sight? Color most traditional investors incredulous. But the company — and its investors — must have justified its value somehow. Earlier this summer, leaked company documents showed Twitter was gunning for 1 billion users in 2013 — a user base that would make it the largest site in the world. That was the result of a thought exercise, co-founder Biz Stone told us in an interview earlier this year. “We started with a very broad idea that the open exchange of information has a positive impact on the world,” he said. Of course, with that comes great expectations. Once you have the user traction (which Twitter does with 21 million U.S. visitors in July according to Comscore) and a specific revenue model (less apparent), how do you get to the valuation? Hence, valuations range from: Think about that for a second: the largest estimate is twenty times the size of the smallest one.

Groupon Raises Huge New Round at $1.2 Billion Valuation (Updated Fast growing Groupon, fresh off a $30 million round of financing that valued the company at around $250 million, is back raising new money. They have closed or are in the process of closing new venture money at a $1.2 billion valuation, say multiple sources (one source says that’s not exactly correct, but close). Groupon offers a daily deal in several cities each day, offering steep discounts of 40 to 90% off a variety of services (i.e, spas, restaurants, etc.), if enough people buy the deal, everyone gets it, if it doesn’t reach a critical mass, no one gets the deal. The site has accummulated 3 million subscribers and currently manages roughly 40 markets. 3 million “groupons” have been purchased since November 2008, says the company. We interviewed Groupon CEO Andrew Mason last week about a number of clones that have popped up recently.